Hi there! Today I’m sharing my review for a release from Lily Harlem. DARK WARRIOR is a contemporary bi-racial M/M romance between a traveling doctor and a Kenyan nurse. And, it’s getting hot on the savannah… 😉 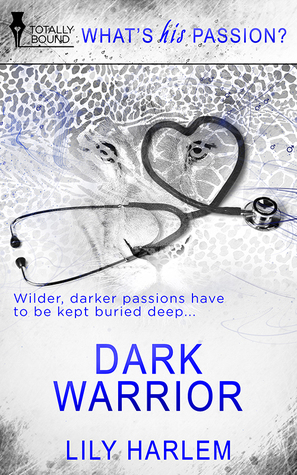 About the book:
While some passions live on the surface, others—wilder, darker passions—have to be kept buried deep.

Dr. Leo Rotherham is following his calling by working in rural Kenya for the charity Medics On Hand. While he expected a primitive way of life and limited medical supplies, what he doesn’t bargain on is falling for handsome village warrior, Malik.

Malik is well respected, knowledgeable and loyal to his tribe. He’s also beautiful, brave, modern and, much to Leo’s dismay, married—isn’t he?

No, it turns out Malik is as free as the animals that roam the African plains at night.

Soon the tension is building between the two men and Leo isn’t sure if he’s coming or going. Whenever he’s around Malik he can’t help but notice the reflected look of lust in his eyes and feel the longing sizzling between them.

Malik stands too close, not close enough. Forbidden attraction simmers between them and the need grows to dizzying heights. But dare they admit to each other what it is they want? And are they brave enough to act on their desires and be honest about their lust? One thing is for sure, a passion this big, this powerful, can’t be contained and it’s all going to explode in the most spectacular of ways.

My Review:
Leo is down of relationships since he and his long-term boyfriend split after 5 years together. He’s been celibate for 18 months, trying to move on, and decides to make the most of his training in tropical medicine serving a month in rural Kenya to work with Doctors On Hand. He is blown away by the beauty, yet desolate poverty, of the tiny village where he is stationed.

His medical training is desperately needed, and he digs right in beside one of the most stunningly beautiful men he has ever seen, Malik. Malik is not only an educated man who spent years in Nairobi, at nursing school and then as a nurse, he is a large man, built like the African warriors of yore. But he is home now amongst his family who live in this small village. In addition to assisting in the clinic, Malik hunts food for his large family and runs the local school. Leo’s absent libido is sorely tested working with Malik, but he knows better than to discuss his homosexuality with anyone in Africa–he truly fears beatings or worse.

It is a careful dance, but Malik learns that Leo is aroused by him, and makes a very cautious foray into the personal realm. Even if Malik returns Leo’s advances, there is no privacy in this village, and Malik’s parents want him to get married. Plus, Malik’s sister has her eye on Leo. It’s all-around difficult.

This is a refreshing romance written about two men from very different cultures finding love where they least expected it. The setting is lovely, and the stakes are high–neither can be found out. Also, there’s the element of danger with the nearby lions, snakes and hippos–not to mention marauders who come to rob the village. The romance is tender, yet spicy, with the added dimension of the racial differences. Expect an HEA, and a whole lotta sexytimes. I received a copy for my honest review.

Interested? You can find Dark Warrior on Goodreads, Totally Bound, Barnes and Noble, AllRomance and Amazon.