Hi there! Today I’m sharing my review for the third book in the Ganymede Quartet from Darrah Glass. As you may remember from my reviews of A MOST PERSONAL PROPERTY and A PROPER LOVER the Ganymede world is an alternate history universe where slavery still exists and Companion slaves, like Martin, are bred to be sold to the wealthy. They are meant to be sexual outlets for wealthy unwed teens, and to later become personal advisers in business and household affairs. It is the year 1901 and Henry is the son of NYC’s most wealthy man. He’s also in love with his Companion, Martin. Henry has always known he was a “fairy” but with Martin he not only embraces his unnatural urges, he’s scheming to celebrate them…

This is an adult read with explicit gay sex between two teens. 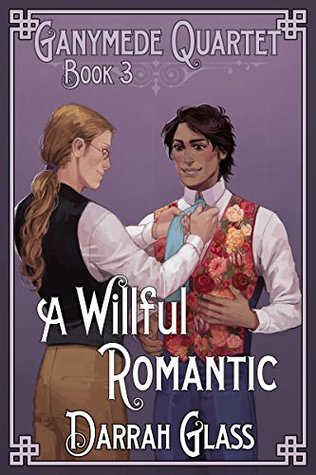 My review:
Disclaimer: I am a super fangirl of this alt historical M/M romance series and stalk the author, unashamedly, so I can get my next Henry and Martin fix.

This is the third novel in the Ganymede Quartet series. It is best to read them in order.

Okay. Where we start in this book is New Years’ Day with Henry bursting with love for Martin. He so desperately wants to share his joy–it is a wonder to him how intelligent, beautiful Martin can truly care for him–about having a companion who is so caring. It troubles Henry that Martin may only love him because it is his job, and often questions Martin about how he might feel if he were a freeman.

Martin thinks this is all nonsense. He isn’t free, and has no desire to be free. He feels exceptional gratitude to have a master who values him as a person, and shows genuine affection.

The two of them are absolutely besotted. Still, this is all behind closed doors. True gentlemen make make use of their slaves, but they are not to kiss them, or ensure their mutual pleasure, or –Heaven forfend–confess to loving them.

But Henry is a willful romantic, and a Valentine has been procured. He is still nervous about Martin’s close friendship with a fellow slave, Tom, and he desires to know more about Martin’s history of training at Ganymede, but the edge of jealousy is wearing off. (Yay!) I really enjoyed Henry’s attempts at closeness with Martin. He laments the difference in their station only because slaves are free to be gay, and free men can be (secretly) gay, but a master/slave gay relationship is doubly tricky. His attempts at public claiming/closeness grow ever more dangerous.

Both Henry and Martin get a bit more voyeuristic in this book, but Henry continues to claim Martin all for himself–never sharing him. There is talk and fantasies about including a third, but Henry’s possessive stance soon garners him a bit of recognition, in a good way for a change. Slave relations are definitely in the forefront of this book, and we end with the knowledge that these boys are in for big changes.

Cannot wait for the next book!

Interested? You can find A WILLFUL ROMANTIC on Goodreads, Amazon, and Barnes & Noble. 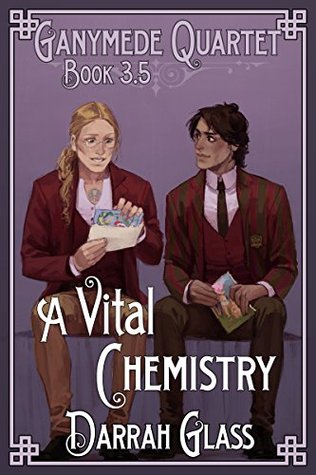 If you want to know more of Martin’s story, each Ganymede book comes with a “companion” novella. A VITAL CHEMISTRY is told in Martin’s POV and recounts not just his current situation with Henry, but also a bit about Martin’s first, love, Richard–a fellow companion-n-training who dies during his 15th year at Ganymede. This is such a lovely book, very sweet, with a 14 y/o, tentative Martin having his first crush!

There is a lot of tenderness in the flashback sections, illustrating how all these boys came to depend upon each other emotionally, as well as physically. I really enjoyed getting more of Martin’s history.

I also really enjoyed Martin’s perspective on his current relationship with Henry. He is very pragmatic, and understands the social risks of Henry’s ardor. He must keep Henry in check–for Henry’s own good–even if it means denying his own desires. Still, he very much loves Henry and I so swoon for books with swoony love stories.

I’m not sure who adores Martin more:  Henry? Or me?

Interested? You can find A VITAL CHEMISTRY on Goodreads, Amazon and CURRENTLY FREE on Barnes & Noble.