Hi there! Today I’m sharing a review for a newer series I have gone crazy for: The Ganymede Quartet books by Darrah Glass. I reviewed the first book, A MOST PERSONAL PROPERTY, before and it’s a really interesting, fun, sexy read. A PROPER LOVER is the second in a series of alt history/historical books where slavery still exists in the year 1900, and wealthy people purchase same-sex slaves for their adolescent children, so-called “companion” slaves, to allow for disgorgement of sexual tension in a “healthy manner.” The protagonists are teen boys, but this is an ADULT book. There is boatloads of graphic gay sex, which doesn’t trouble me a whit. You are hereby warned. 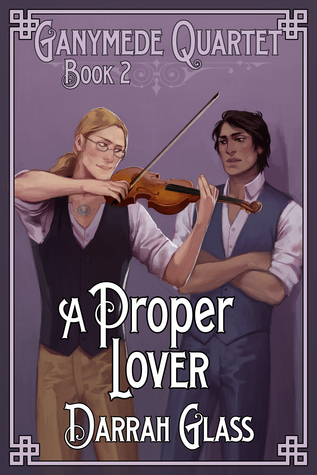 About the book:
What does it mean to belong to someone?

Henry Blackwell is the happiest he’s ever been, and it’s all because of his companion slave Martin. Every experience, whether it be mundane or spectacular, is improved by having Martin at his side. The better Henry gets to know his slave, the deeper his feelings grow. Though the physical attraction between them is undeniable, Henry’s sure there’s more to their relationship than just sex. He can’t be certain, as it’s never happened before, but he believes he might be falling in love.

Henry’s friends are ready and willing to put their own slaves aside in favor of female companionship, and they’re beginning to wonder why Henry isn’t interested in girls. Henry only wants to be with Martin and doesn’t know how much longer he can use “late bloomer” as an excuse. The holiday season approaches, along with the promise of parties with friends and family. Henry doesn’t want to share Martin with his friends, but he doesn’t like being left out. Will he stand up for himself—and Martin—when it counts?

My Review:
Here’s what I love about these books: the love.

Henry Blackwell is the son, and heir, of the richest man in NYC in 1900. He also has an “unnatural” attraction to his companion slave, Martin. They engage in sex whenever and wherever possible. It’s socially acceptable for Henry to “use” Martin, but not to kiss him, or to ensure that Martin is satisfied. No, proper slave owners simply take their own pleasure and pay no heed to their slaves wishes, or comfort.

But, that isn’t Henry.

He adores Martin, and spoils him whenever possible. Part of Henry’s generosity comes from his own father’s egalitarian example: the Blackwell slaves are some of the most respected on account of their fair treatment. The rest? Henry craves affection. His mother and father are extremely distant parents. The only real love Henry has ever known has come from the slaves of the house and his Uncle Reggie, who moved to Italy nearly a decade ago. And Martin seems more than acceptably affectionate with Henry, too.

Though they have only had sexual relations for a few weeks Henry is sure he loves Martin. This he hides deep inside. It’s hard enough wondering if Martin could return his sentiment, but fearing a luke-warm reception to his fervor keeps Henry from revealing his true feelings–at least verbally. The boys spend a lot of time physically demonstrating their passion.

Before this time Martin believed Henry had no interest in him, and even cast some “slave magic” spells to attract Henry’s regard. Martin confides this to Henry, who endeavors to demonstrate that his love for Martin is not of the magical variety.

The book is so fun. I love the historical setting, and the deepening of the relationship between Henry and Martin. It is for Martin that Henry breaks through his shell, and endeavors to be a better student and brother.

All of Henry’s friends regularly share their slaves, trading them for sexual favors like one might hand off a piece of gum or a sweater to a pal. Henry abhors this idea, though he gets drawn in inadvertently, leaving open the question of fidelity for one’s slave.

I’m so glad it ended how it had! And, I look forward to book three most eagerly. I received an ARC of this book because I’m a super fangirl and begged the author.

Interested? You can find A PROPER LOVER on Goodreads, Amazon, and Barnes & Noble.

You can test drive this series for free by reading A SUPERIOR SLAVE, the prequel to A MOST PERSONAL PROPERTY, available on Goodreads Barnes & Noble, and Amazon.

You can find Book 1, A MOST PERSONAL PROPERTY, on Goodreads, Amazon and Barnes & Noble.

And Book 2.5, A MASTER’S FIDELITY, is also free. And, I loved it. Available on Amazon and Barnes & Noble.