Hi there! It’s my great pleasure to share reviews for the final book (and companion!) in the Ganymede Quartet, A COLLAR AND TIE. I have shared reviews for this alternate historical M/M series: A MOST PERSONAL PROPERTY, A PROPER LOVER, and A WILLFUL ROMANTIC, each having a free companion novella as a bonus.

In truth, I adore these boys, and their travails have become mine. 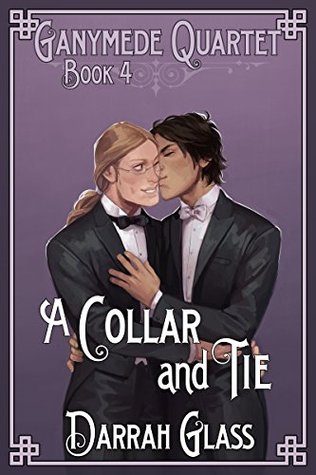 My Review:
This is the FINAL book (sighs from the loss!) of the Ganymede Quartet, and the books need to be read in order.

I have faithfully followed this series, loving every second of Henry’s angst and Martin’s solicitousness. The books are set in an alternate historical period, NYC circa 1901, but in this world slaves are still present, and Companion slaves are purchased by wealthy families for the personal use of their teenaged children. Martin is a Companion from the House of Ganymede who was purchased for Henry Blackwell, scion of the industrialist Hiram Blackwell, seven months ago. Henry’s darkest secret is that he loves Martin, even though it is unnatural and unacceptable gentlemanly behavior.

Henry is a romantic fool, wishing that he could change the world so that his love for Martin could be shared with any, and every, one. He has no desire to marry a woman, even though he knows this is expected. He fears his father will take Martin away if he learns of Henry’s proclivities, and yet he cannot contain his ardor. *swoon*

Henry is a desirable partner for the ladies, because he is wealthy and handsome, and his lack of interest is almost catnip for some of the girls of his acquaintance. Still, Henry’s impulsiveness is bound to get him into more trouble–when he steals private moments at the Metropolitan Ball with Martin. His indiscretion leads to a falling out with his best friend, Louis, and a hasty retreat into the bowels of NYC’s seedy gay society.

I was so enamored of this part–of Henry finding common folk with whom to share his joy over being with Martin. Being that he’s still only 16, Henry’s compass doesn’t necessarily point in the proper direction. Martin’s attempt to steer him rightly is unwelcome, and leads to further discord. Oy vey, Henry! It is meant to be, child, just not the way YOU want it to be…

I had my heart broken along with Henry, though I knew he was being petulant and rotten to Martin. I awaited reconciliation and, like Martin, was rewarded for my patience. As a romance, this book (and series) hits all the marks. It is sexy and sweet and sad and joyous. I have angsted alongside these boys for the better part of a year–and I could go ten more years hearing their wondrous tales.

All the main issues are accounted for: Henry and his parents have a better relationship. Henry learns to deal with his love for Martin in private. People want to be around Henry, despite his “invert” issues. Martin is fantastic and lovely and wonderful and Henry will be a better man for loving him.

This book ends with a satisfying resolution, but I’m still not satisfied. I’m a little bitter that this is the end, in truth. I need more Henry and Martin in my life. I want to know how their lives change. I want to tag along to college, and to see Henry attempt to court a lady. I want he and Martin to live long happy lives together, filled with adventure and love.

I know I won’t see them again like this, and I am melancholy over it.

Interested? You can find A COLLAR AND TIE on Goodreads, Amazon, and Barnes & Noble.

As is Ms. Glass’ custom, she releases a companion novella from the POV of Henry’s Companion, Martin. This is a freebie, but won’t make much sense for people who don’t read Henry’s book, first. 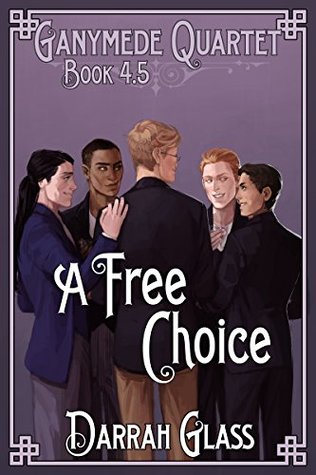 I adored A FREE CHOICE, which is to be expected, really, as I have adored the series in its entirety.

The book is a wrap on the series, and mostly follows the final three days of A COLLAR AND TIE, from Martin’s perspective. It is lovely and wonderful, and I want more!

Martin has recently reconciled with his master and lover, Henry Blackwell. Henry’s family is an odd mix, and not quite what Martin had hoped for when he was being sold as a Companion last September, but Martin has found love and devotion in his master and he could not have wished for better circumstances.

Martin does wrap up his thoughts on the 14th Street debacle and his misery over Henry’s bad temper quite well. I was so glad to see his playfulness and thoughtfulness come out so strongly. I think Martin is finally comfortable enough to be a partner to Henry, and not solely his slave. I do so want to see them try Chinese food, and go out adventuring with Mr. Ross and Simon! To see them play with Mr. Wilton and Russ.

I think I might not go gracefully into this goodnight, Ms. Glass!

I am not ready for this series to end. And I am eager for further stories to bring them back to me.
*crosses fingers*
*contemplates pact with the devil*

You can find A FREE CHOICE on Goodreads, Amazon and Barnes & Noble.