Hi there! Today I’m excited to share a Throwback Thursday review for a contemporary M/M romance from Kim Fielding. THE LITTLE LIBRARY connects a lonely historian with a cop on the mend. I enjoyed A SECOND HARVEST and LOVE CAN’T CONQUER, and I’m a big fan of Ms. Fielding. 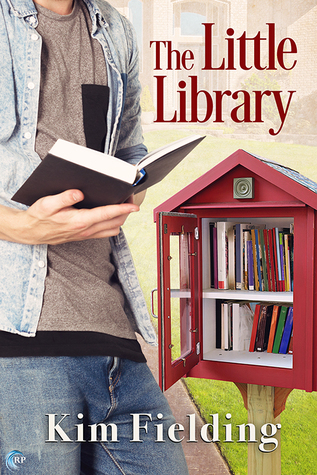 About the book:
Elliott Thompson was once a historian with a promising academic future, but his involvement in a scandal meant a lost job, public shame, and a ruined love life. He took shelter in his rural California hometown, where he teaches online classes, hoards books, and despairs of his future.

Simon Odisho has lost a job as well—to a bullet that sidelined his career in law enforcement. While his shattered knee recovers, he rethinks his job prospects and searches for the courage to come out to his close-knit but conservative extended family.

In an attempt to manage his overflowing book collection, Elliott builds a miniature neighborhood library in his front yard. The project puts him in touch with his neighbors—for better and worse—and introduces him to handsome, charming Simon. While romance blooms quickly between them, Elliott’s not willing to live in the closet, and his best career prospects might take him far away. His books have plenty to tell him about history, but they give him no clues about a future with Simon.

My Review:
History professor Elliott Thompson is licking his wounds following the disastrous end of his most recent relationship. His ex is a criminal, and though Elliott was found innocent of conspiring with him, his university decided it would be best if they made clean break. So, he’s returned to his small California hometown, teaching online courses and masking his hurt feelings with an addiction to purchasing books online–particularly paperbacks. His home, however, has only so much physical space to contain these books, so Elliott’s solution to his book hoarding is to build a little library that he posts in his front yard. Elliott’s home is near a popular footpath, so his neighbors are a bit thrilled with the advent of free books just for their own pleasure. Well, mostly. He does have one homophobic jerk who makes more than a stink over it. Elliott takes great pleasure curating his library selection and seeing what books get taken–and what new ones are replaced by other readers!

Simon Odisho is a first generation American, born to Assyrian immigrants. His family is boisterous and caring, but also conservative, and Simon has kept his sexuality secret from them, and the members of the police force–while he was employed there. Unfortunately, a bullet in the line of duty has ruined Simon’s knee and his prospects in law enforcement. He walks the trail near Elliott’s home for his physical therapy, and he admires Elliott’s running on the trail and his little library.

The attraction between Elliott and Simon is mutual, despite the difficulties of their lives. Simon still wants to remain closeted, and Elliott is considering job offers that could take him away from this small town respite. In consideration of these conflicts, they decide to try something low-key and no strings, but that’s a sure-fire way to find the love you’d been seeking all along. There’s a little bit of steam and a little bit of humor–especially the first date scene which is laugh out loud. Through the growth of these characters we get to see how a community of supporters can change the bleakest of moments and experiences. And how books can change all our lives for the better. When I first read this one, I thought the bigoted neighbor was over-the-top and a bit of a caricature, but seeing this character in light of the way some folks are behaving in real life, regarding the pandemic, and racial injustice and being just uncivil in the highest degree, I could fully envision this character anew and recognize him for the danger he poses in our world today.

That said, it’s a pretty low angst romance with a bit of steam and a believable HEA for Simon and Elliott. It was an enjoyable read back when it came out, and again when I delved back for a TBT.

Interested? You can find THE LITTLE LIBRARY on Goodreads, Amazon, and Apple Books. I received a review copy of this book via NetGalley.

About the Author:
Kim Fielding lives in California and travels as often as she can manage. A professor by day, at night she rushes into a phone booth to change into her author costume (which involves comfy clothes instead of Spandex and is, sadly, lacking a cape). Her superpowers include the ability to write nearly anywhere, often while simultaneously doling out assistance to her family. Her favorite word to describe herself is “eclectic” and she finally got that fourth tattoo.