Hi there! Today I’m sharing a review for a contemporary M/M cozy mystery from Josh Lanyon. MAINLY BY MOONLIGHT is the first book in the Secrets and Scrabble series, and I jumped in with both feet, even if it’s not a romance… I’ve also enjoyed MAINLY BY MOONLIGHT by Lanyon, which is a M/M paranormal romance, and will be posting about the sequel soon. 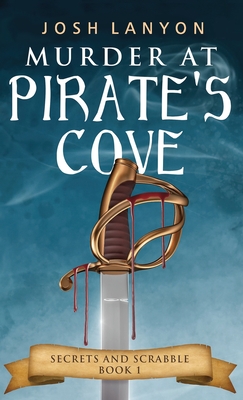 About the book:
Ellery Page, aspiring screenwriter, Scrabble champion and guy-with-worst-luck-in-the-world-when-it-comes-to-dating, is ready to make a change. So when he learns he’s inherited both a failing bookstore and a falling-down mansion in the quaint seaside village of Pirate’s Cove on Buck Island, Rhode Island, it’s full steam ahead!

Sure enough, the village is charming, its residents amusingly eccentric, and widowed police chief Jack Carson is decidedly yummy (though probably as straight as he is stern). However, the bookstore is failing, the mansion is falling down, and there’s that little drawback of finding rival bookseller–and head of the unwelcoming-committee–Trevor Maples dead during the annual Buccaneer Days celebration.

Still, it could be worse. And once Police Chief Carson learns Trevor was killed with the cutlass hanging over the door of Ellery’s bookstore, it is.

My Review:
Screenwriter Ellery Page has inherited his great-greataunt’s mystery bookshop, the Crow’s Nest, and crumbling estate in idyllic Pirate’s Cove–where everything is a pun on the historical founders of the town. It’s a big change from NYC, where he was floundering after his boyfriend left–taking their mutual friends with him. What seems to be a great chance at a fresh start is really just a step away from misfortune, as the bookshop had hardly any customers, and his home, Captain’s Seat, which was maybe built form the timbers of an old pirate vessel, is very aptly called a death trap.

Ellery is making the best of it, and he’s frustrated by the persistence of a motivated buyer for the bookshop, Trevor Maples. Trevor has been land-grabbing all he could in Pirate’s Cove, hoping increased tourism might help him turn a profit. He’s also up for mayor, and his bullish ways haven’t made Trevor many friends in town. Ellery isn’t willing to kowtow to a bully, but he’s suspect number one when Trevor Maples ends up dead on the floor of the Crow’s Nest the very evening after Ellery was overheard to vehemently promise to never sell. And it looks like the murder weapon was the now-missing antique cutlass that hung over the shop’s door.

An outsider in the town, Ellery’s sure Police Chief Carson will make 1 + 1 = Ellery’s arrest, adn the local paper is surely hounding both Ellery and Carson over the fact that Ellery isn’t immediately taken into custody. Fact is, the chief has seen Ellery having a meal in a pub minutes before the body was found…by Ellery. And as the evidence keeps getting found…by Ellery…it seems ever more likely that Ellery is being set up as a patsy. Ellery’s unwilling to get railroaded, however, and starts investigating a bit on his own. Which only brings him more confrontation. Especially when the second murder happens.

This is a really intriguing cozy mystery, with just a HINT of a budding romance. Ellery and Chief Carson are developing quite a nice rapport, even if Ellery’s not sure the lawman bats for his team. Well, until more than halfway in. Carson is a good investigator, and he’s frustrated that Ellery keeps taking daring chances to help prove his own innocence, choices that put Ellery in harm’s way more than once. The town and townspeople are as fun and quirky as one might hope, staging their Pirate Days festival that brings few visitors, but lots of gags for the locals.

The end is satisfying, with the red herrings and dead ends all knotted up tightly. It’s the beginning of a series, which makes me nervous for more death in this quaint hamlet! But, it also seems to promise a little bit of romance for Ellery, who’s finally got his life on track. I adored Ellery and his deadpan narration, with his constant predicaments and hope for just keeping it all together. I’m all in for more of this, hoping we get some Scrabble to go with our secrets.

Interested? You can find MURDER AT PIRATE’S COVE on Goodreads, Amazon, and Barnes & Noble. I received a review copy via NetGalley.

About the Author:
Josh Lanyon is the author of over sixty titles of classic Male/Male fiction featuring twisty mystery, kickass adventure and unapologetic man-on-man romance.

Her work has been translated into eleven languages. The FBI thriller Fair Game was the first male/male title to be published by Harlequin Mondadori, the largest romance publisher in Italy. Stranger on the Shore (Harper Collins Italia) was the first M/M title to be published in print. In 2016 Fatal Shadows placed #5 in Japan’s annual Boy Love novel list (the first and only title by a foreign author to place). The Adrien English Series was awarded All Time Favorite Male Male Couple in the 2nd Annual contest held by the 20,000+ Goodreads M/M Group. Josh is an Eppie Award winner, a four-time Lambda Literary Award finalist (twice for Gay Mystery), an Edgar nominee and the first ever recipient of the Goodreads Favorite M/M Author Lifetime Achievement award.