Hi there! Today I’m sharing a review for a contemporary M/M military romance from Annabeth Albert. ROUGH TERRAIN is the seventh book in her Out of Uniform series that features romances for Navy SEALS stationed in Coronado, California. Having read and loved OFF BASE, AT ATTENTION, ON POINT and WHEELS UP, I couldn’t wait to sink my teeth into this new one–and what a different love story this was! 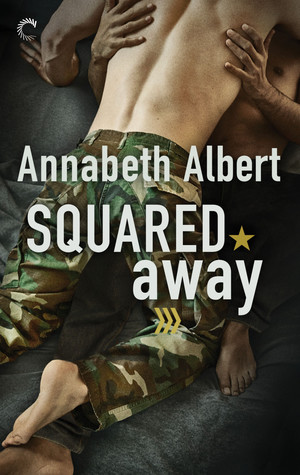 About the book:
The camping trip from hell may be the first stop on the road to happily-ever-after.

Navy SEAL Renzo Bianchi has a soft spot for Canaan Finley, and not only because the man makes a mean smoothie. He’s the first guy to get Renzo’s motor revving in a long time. But when he agrees to Canaan’s insane charade—one all-access fake boyfriend, coming right up—he never expects more than a fling.

Creating a hot Italian SEAL boyfriend to save face seemed like a good idea…until his friends called Canaan’s bluff. Now he’s setting off into the woods with the very man who inspired his deception, and Canaan is not the outdoorsy type. The sparks are already flying when a flash flood separates them from their group, leaving Renzo and Canaan very much trapped…very much alone in the wilderness.

Working together to come up with a plan for survival is sexier than either of them expects. But back in the real world, being a couple is bringing its own set of hazards…

My Review:
Renzo Bianchi is a navy SEAL, code name Rooster, who’s had some hard times finding a good partner. Generously endowed, but with a heart of gold, Renzo is tired of his mediocre sex life. He’s attracted to a man at his local smoothie shop–Canaan Finley–but he’s not sure he wants to try even hooking up; fully expecting disappointment. He has a big and loving family, but a childhood accident still haunts him, pushing to be the best ever son to his parents.

Canaan is a local to the San Diego area, having been born and raised there by his grandparents after his teen mom couldn’t. Canaan spent years touring with a local punk band, and only gave up drumming professionally when his grandma was dying. He now lives with his elderly gramps, and he’s one semester away from graduating with his nursing degree. He works at the smoothie shop to pay his expenses, and he loves the SEAL eye-candy that rolls through, but he’s made Rooster his mission, at least for a hook-up. Their flirtation leads to a nice date, and a chance to hang some more: Canaan’s old band is planning a reunion camping trip in the Grand Canyon and they’ve invited Canaan (and his PARTNER) to come along. Only, Canaan doesn’t have a partner. The chemistry between Renzo and Canaan seems great though, and he tentatively asks Renzo to come along…and pretend to be his boyfriend.

Renzo can tell that one of the bandmates is especially hostile to Canaan, which gets his protective instincts all riled up. That, and their chemistry is really off the charts, especially once they get some alone-ish time. The trip is tense, though, and it only gets worse when Canaan injures his foot, and the weather creates a harrowing situation. Stranded and waiting for rescue, Renzo and Canaan have lots of time to bond, which ramps up their romance.

When the dust settles and they’re back to “real life” Renzo and Canaan are game to give being real BFs a try. It seems to be going great–Canaan has all sorts of tricks for dealing with his enormo phallus. Each man seems to be falling hard, but there are new obstacles. Thanks to the accidents on the trip, Canaan’s old band mates want him to step in and do some local gigs. And, before they’d even met Renzo had applied for a transfer to a base in Virginia–so he could be closer to his family in Philly. Canaan meets the family, and helps Renzo get past some of his emotional hang-ups, so it’s a big issue when Renzo’s new orders come through. I likes how tender this story was, and how cared for Renzo and Canaan made the other man feel. Being inside their POVs helped me see how much each of them wanted to please the other–sacrificing some parts of their own joy or comfort to boost the other. It was so sweet, and bittersweet, with the specter of huge life shifts in the offing.

Expect the resolution to come after a decent break and some serious soul-searching. I liked how they reconnected, and their plans for the future seemed well-considered and realistic. It’s another happy SEAL and his mate–and I really enjoyed it from start to finish.