Hi there! Today I’m sharing a release day review for a new contemporary M/M military romance from Annabeth Albert. ON POINT is the third book in her Out of Uniform series and features two Navy SEALs who are teammates, roommates and best friends, with more on the horizon. I really loved OFF BASE and AT ATTENTION so there was no way I’d miss out on this one!

Drop down to check out the excerpt, my review and get in on the $20 Amazon GC giveaway, too! 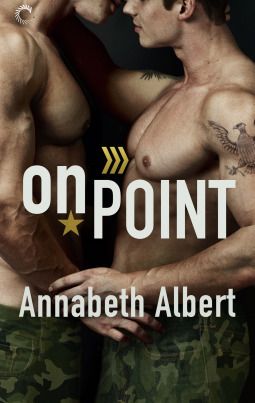 About the book:
Never fall for your best friend…
Pushing thirty, with his reenlistment looming, decorated navy sniper Maddox Horvat is taking a long look at what he really wants in life. And what he wants is Ben Tovey. It isn’t smart, falling for his best friend and fellow SEAL, but ten years with Ben has forged a bond so intimate Maddox can’t ignore it. He needs Ben by his side forever—heart and soul.

Ben admits he likes what he’s seen—his friend’s full lower lip and the perfect muscles of his ass have proved distracting more than once. But Ben’s still reeling from a relationship gone to hell, and he’s not about to screw up his friendship with Maddox, too.
Until their next mission throws Ben and Maddox closer together than ever before, with only each other to depend on.

Now, in the lonely, desperate hours awaiting rescue, the real challenge—confronting themselves, their future and their desires—begins. Man to man, friend to friend, lover to lover.

The rain pelted down as he made his way up the ridge, thick sheets that obscured his vision and made the terrain slippery and treacherous. Overhead, a large black bird with a colorful beak swooped in, almost sending Ben skidding into a ravine.

He whistled low, a deliberate pattern, one of the team’s signals. He repeated the sound as he approached where Maddox was supposed to be. An answering signal came from a dense thicket of green vegetation.

“It’s me. Hold your fire,” Ben called as he slipped into the mass of trees and roots. The plants here were nothing like the ones back home—giant heart-shaped leaves and bright rubbery flowers that almost looked bird- or insect-like. The trees had massive, visible roots covered with moss, and were connected by thick vines that could easily be mistaken for a deadly snake.

Below him, he could see the encampment, SEALs scurrying around. The injured hostage and Issacson, their wounded radio man, were carried out, which had to mean the chopper was close. Time to haul ass. “Maddox?”

“Here.” Maddox slid out of the shadows, rifle at the ready, just as Ben had expected. “Com’s down for you guys too?”

“Yup. Chopper’s coming in. LT sent me to bring you in. No time to waste. Issacson took a bullet, but he’s stable, and one of the hostages is in bad shape. Possible hostiles escaped, but Rogers and company are hunting them down.”

“Got it. Lead the way.” Maddox let Ben take point as they made their way down the ridge. They had to skirt the edge of a steep drop, every muddy step cautious even as they needed to make haste.

Two things happened at the same instant—gunfire broke out above them and a chopper approached, engine noise making it hard to track the source of the shots. But Maddox was already on it, crouching low, rifle ready. Another shot whistled over their heads and Maddox returned fire. They both left the trail and headed into the brush, intent on finding the hostiles.

The chopper circled low, then went back up. Fuck. The chopper was struggling to land in the encampment clearing, which meant the next pass was critical. Still staying low and gun ready, he inched forward. No more gunfire had followed Maddox’s, but that didn’t mean he could let his guard down for a second.

The chopper circled again, but the terrain had shifted and Ben could no longer see the encampment beneath them.

“Fuck.” Maddox never cursed, so Ben whipped his head around just in time to see Maddox slipping off the poor excuse for a trail.

Ben scrambled on his stomach, stretching out an arm, trying to catch Maddox. “Grab on.”

“No. Don’t—” Maddox didn’t get the sentence out before they were both tumbling down the muddy incline, heading straight for the ravine that lay between them and the encampment. Ben tried to slow their descent but his attempt to grab at some vines only resulted in the foliage following them down.

Maddox screamed, a legitimate yell that chilled Ben to his boots because Maddox never lost composure. Ever. Ben had once watched Wizard put sutures in Maddox’s scalp while Maddox hummed, never dropping his tune.

Ben grabbed for him again and— Pop. Ben’s arm pulled at an unnatural angle, caught up in a tree root and not Maddox’s strong grip as he’d intended. He wrenched loose but the damage was already done, and still he slid, mud carrying him faster, rocks and vegetation raining down after them.

“Fuck. Fuck. Fuck.” Ben’s arm and shoulder were on fire and he was still moving, sliding, nothing working—

Boom. The bottom of the ravine arrived without warning, a muddy bog that sucked him down, but it was hardly a soft landing, rocks and plants poking at him. His arm had him cursing, eyes watering. He’d seen Rogers dislocate a shoulder last year in the grinder obstacle course, and at the time he’d rolled his eyes at how Rogers had carried on. He had a sick feeling that he’d done the same or worse to his shoulder, and he got the urge to cry and howl.

“Oh fuck.” His stomach heaved and he barely made it to his side before he threw up from the pain. He turned his head and almost lost his guts again. Maddox lay a few feet from him, leg at an unnatural angle, blood dripping from his head, helmet nowhere to be seen. Not talking or cursing.

Clawing at the rocks with his good arm, Ben pulled himself closer, looking for the telltale rise and fall of Maddox’s chest—and not seeing it.

Still nothing, not even a ghost of movement across Maddox’s pale lips. Terror, nothing Ben had ever known before, froze his veins, made him lightheaded from more than just the fall. He refused, utterly refused to live in a world where Maddox wasn’t okay.

“Maddox. Horvat.” He shook his shoulder, cursing under his breath. No, no, no.

Whoosh. A chopper—the chopper—flew overhead, much too far to spot them down this ravine, and heading away from them.

Sputter. Maddox let out a mighty cough. It might have been the most beautiful sound Ben had ever heard, because it meant Maddox was here, that he was fighting, and Ben started to laugh with relief until Maddox spoke. “Heck. They’re leaving us.”

My Review:
Maddox Horvat and Ben Tovey have been friends and teammates as Navy SEALS since they completed BUD/S training ten years ago. They have always had each others’ backs, but Maddox has wanted more for a long time, now. Especially since the past two years when Ben has lived in his apartment, after his nasty divorce from Trey. Ben’s been a man-about-town, never banging the same guy twice, since Trey disappeared, not that he didn’t get around bunches what with their very open marriage. But Maddox wants Ben all to himself, and struggles to hide his desires in order to maintain their close friendship.

It’s time for Maddox to re-up with the SEALs, and he’s not sure he wants to. He’s got some money saved, and has been working on his baking for years now. Even if his dream comes to pass and he and Ben become a couple, they couldn’t stay on the same team any longer. Besides, the reason Maddox got into the service in the first place was to prove to his homophobic family that he was just as much a man as any other, no matter who he loved. Knowing that they will never accept him as he is, even if he should die for his country? Well, kinda takes the impetus away for proving one’s self.

While out on a dangerous mission, Ben and Maddox get temporarily left behind, and it brings their world together into extreme focus for both men. Maddox is seriously injured, and Ben is tasked with keeping off the enemy and keeping Maddox alive until they can be rescued. During those stressful hours Ben recognizes that he needs Maddox in his life, no matter what. And the peculiar feelings he’s been having–about him and Maddox together for real–are banging through his concussed head.

Stateside, their healing isn’t only of the physical. Maddox and Ben need to be near one another to feel whole, and their time in the hospital brings clarity for Ben: he needs to try to love Maddox they way he needs to be loved–because Ben can’t exist in a world where Maddox isn’t by his side. Maybe, Ben thinks, if he seduces Maddox, then Maddox won’t leave the SEALs; won’t leave him, as his mother and husband did…

I really enjoyed the slow burn as these two felt their way toward a loving, intimate relationship. They have always been each other’s best friend, and they’ve had a deep intimacy in terms of knowing one another, but the step into lovers hasn’t been easy. Maddox has very defined ideas about monogamy, thoughts Ben hasn’t had in years now, but for Maddox he’d give up a whole lot. Maddox knows Ben wants him on his team, in the trenches, and in bed–behind closed doors–but Maddox is beyond doing what other people want. He needs to do for himself, and if Ben walks away, well it’ll hurt deep, but Maddox will weather that storm and find a man who can love him for who he is, not what he does. Maddox wants a settled life, and he wants Ben in it, but Ben has to choose him. And, well, I’ll just say that Ben makes the right choice.

This one is hot and steamy and sexy and sentimental and fabulous. I could hang out in Maddox’s kitchen all day and half the night. Ben is a grouch, but the kind of grouch that is endearing. He grows a lot during the time of the story, and makes the right decisions, eventually, to find his own happiness. I liked how he made things right within his family, and opened himself up to forgiving people who’d hurt him. I highly recommend this one!

Interested? You can find ON POINT on Goodreads, Carina Press, Amazon, Barnes & Noble, Kobo, and iTunes. I received a review copy via NetGalley.

Be sure to check out my reviews for OFF BASE and AT ATTENTION, the previous titles in this series. While you don’t have to read the books in order, they are fabulous, too!

Click on this Rafflecopter giveaway link for your chance to win a $20 GC to Amazon.
Good luck and keep reading my friends!

Emotionally complex, sexy, and funny stories are her favorites both to read and to write. Annabeth loves finding happy endings for a variety of pairings and is a passionate gay rights supporter. In between searching out dark heroes to redeem, she works a rewarding day job and wrangles two children. Represented by Saritza Hernandez of the Corvisiero Literary Agency.

5 thoughts on “Friends to Lovers ON POINT–Review and Giveaway!”