Hi there! Today I’m sharing a review for a dragon-shifter romance from Donna Grant. IGNITE is the 15th novel in her Dark Kings series, and really best enjoyed when read in order. Particularly, you should read DRAGONFIRE before this one. Others that I’ve enjoyed include SMOKE AND FIRE, FIRESTORM, BLAZE, and DRAGON BURN, and DRAGON CLAIMED so I’m eager to reach the “climax” of this sexy series. 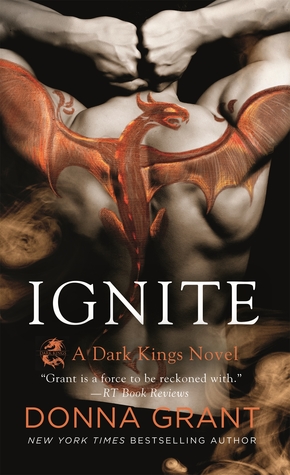 About the book:
Every inch of him was molded as if from granite…and her blood ran like fire…
For centuries, V has waited to awaken from his doomed sleep and reclaim his destiny. But this Dragon King—one among a legion of legendary warriors sworn to protect the human race from darkness—must first find a way to win back his sword. Wield its power. And try not to fall prey to his own illicit desires.

Claire may possess the beauty and soul of a goddess but V knows better than to mess with a mere mortal. Still, he instinctively knows that Claire is The One who can help him regain the use of his sword and restore his place at Dreagan. But if she learns the truth about who—and what—he really is, her memories of him would be erased forever. How can V love Claire truly, madly, deeply…and protect her from the forces of fire and darkness that could destroy them both?

My Review:
This is a book deep in a series of adult paranormal romances that all feature strong women falling for sexy Dragon King shifters.

Vlad is a Dragon King hailing from the Carpathian Mountains. He possessed a magic sword that enabled him to open bridges to other realms–like where the remaining dragons were sent eons ago when the human population became large enough to become a threat. The sword was lost centuries before and each time Vlad goes looking for it, a catastrophic disaster occurs–like the burning of Rome and the Black Plague. He and Roman, another King recently recovered the sword buried deep in an Icelandic mountain. Unfortunately, Vlad is struggling to hear and feel the magic of his sword. It seems to be gone, and with it any connection to the lost dragons.

Claire is a dear friend and co-worker with Sophie, a mate of another Dragon King. Claire knows about the Dragon Kings, though she isn’t supposed to–the Kings thought they had wiped her memories of being attacked by Dark Fae, but they had survived. Claire is a lady who’s been crapped on by love. And Vlad is a super helpful around the clinic. He’d been admiring Claire for a while, but finally makes a move when he’s despondent about the sword.

Things click, and escalate–because the mates are all being drawn close to Draegan. They are circling their wagons expecting an attack from Usaeil, the Queen of the Light Fae, who seems to pulling the strings of The Others against the Dragon Kings. Constantine, King of all the Kings, has inexplicably gone missing and all the Kings and their mates are on the edge of frustration. It makes for fertile ground for a bond to grow between Claire and Vlad. It’s a lightning strike of love, and it brings it’s own magic–an unheard of pregnancy.

This book really brings the conflict of the overarching series to a fever pitch, while introducing a new couple of fated mates. I liked both Claire and Vlad, and the twist at the end really got me thinking about the lengths Usaeil will go to to have her way…with Constantine. We seem to be nearing the climax of the series, and I’m glad to see how it’s all resolving. I’m eager to read on.