Hi there! Today I’m sharing a review for a dragon-shifter romance from Donna Grant. DRAGONFIRE is the 14th novel in her Dark Kings series, and really best enjoyed when read in order. I’ve liked SMOKE AND FIRE, FIRESTORM, BLAZE, and DRAGON BURN, and DRAGON CLAIMED so I’m eager to reach the “climax” of this sexy series. 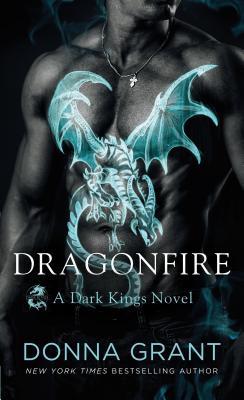 About the book:
It was a soul-deep longing, one that got into his bones and settled there, sending whispers of desire through him. The need, the hunger, grew tenfold with every breath. . . .

As a Dragon King, Roman is sworn to protect all mortals–even though they no longer believe in dragons. But deep in the Carpathian Mountains, he discovers a beautiful and mysterious gypsy who possesses the power to see into his very soul. To reignite the fire in his heart. And to help him find the long-lost sword that could save the dragons forever…

Sabina remembers the stories her grandmother told her. Legends of dragons and kings, fire and ice. And she’s never forgotten the dark prophecy that filled her ancestors with fear–a fate they tried to prevent by stealing a Dragon King’s sword. Sabina knows that helping Roman is dangerous. He is a dragon betrayed, and more powerful than any man. He could destroy her in a single fiery embrace. But how can she resist the longing in his eyes–or the feelings in her heart–when their destinies are bound by desire?

My Review:
Roman, a Dragon King honor-bound to protect humanity feels doubly-bound to help his fellow dragon-shifter friend Vlad recover his missing sword. This sword, lost eons ago, was the key to opening a realm to which the dragons of yore fled when humanity took over too much of Earth. Each time Vlad has awoken from enchanted sleep to find his sword he’s ended up on a rampage that has killed masses of people, so Roman’s not about to let Vlad go off to his homeland of the Carpathiam Mountains without backup.

Upon landing in his native soil, Vlad and Roman encounter Sabina and her seemingly-disabled brother, Camlo, who each have a touch of Romani (gypsy) magic in their blood. Sabina’s gran had been a strong matriarch and she passed the family history to Sabina at young age–warning her to guard their secrets. When Vlad touches Camlo, who has had visions of Vlad’s return, Vlad is knocked out, and it’s then they begin the search through memory and vision to recover the hidden sword.

Roman seems keen to assist, but he knows they need more help–so he reaches out for Fae and Druid assistance as the path leads them into some of the most harsh landscape Roman’s homeland of Iceland. The travel only gets worse, hampered by ancient magic aimed to thwart the seekers–but it yields important clues about those who’ve been plaguing the Dragon Kings, of late. Sabina is a fated mate of Roman–and their ordeals only drive them closer–especially when it’s clear that Camlo’s magic is necessary to save them all.

As part of the overarching series, this book give the reader insight into “the Others” a Druid (or anti-Druid) interference that seems to extend back to when Vlad’s sword was originally stolen–and Sabina’s sacred family history is critical to finding out the hows and whys of it. Sabina knows about the dragons of yore, and she’s kinda thrilled by the intense chemistry she feels with Roman. Roman’s been adrift a long time, and he’s glad to have met his match. Dear Camlo is so sweet and an interesting character. The journey to the center of magic in Roman’s own mountain brings him near to death at least once, but help from Ulrik and others brings him back from the brink.

The resolution reunites Vlad and his sword, but the struggle doesn’t end for that Dragon King. Meanwhile, Roman and Sabina do what is necessary to make their love survive–and take care of Camlo, in the process. It’s a grand adventure, and I liked the interwoven storylines–bringing Ulrik and his mate into the action was nice, as I haven’t had a lot of experience with Ulrik being a good guy. The love story is a little rushed, due to all the action, but it wasn’t too compressed. They seem to spend an ice age half-buried in the tunnels, and that has the effect of decreasing one’s emotional timetable.

One thought on “Scorched by the DRAGONFIRE–A #Throwback Thursday Review”