Hi there! Today I’m sharing a review for a brand new M/M military romance from L.A. Witt. WASH OUT is the seventh book in her Anchor Point navy series. I’ve loved JUST DRIVE, AFRAID TO FLY, CHIEF’S MESS, and RANK & FILE. WASH OUT features a main character that appeared in AFRAID TO FLY, but they can all be read as standalones. 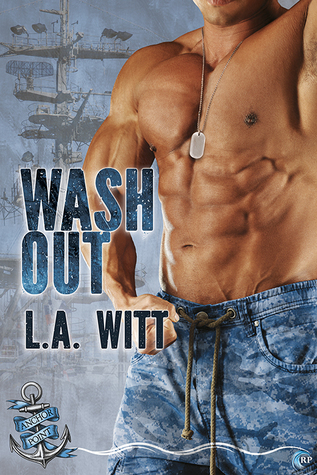 About the book:
Casey Olson has always known he was destined to be a Navy SEAL, and the best day of his life was when he was accepted into training. The worst day was when a snapping bone ended his dream.

After three combat tours in five years, Logan Carter left the Marines and self-destructed. Now he’s sober and, thanks to a forgiving ex with friends in high places, has a promising job as a civilian contractor. All he has to do is stay on the rails and out of a bottle, even when his demons won’t leave him alone.

Logan likes his job, and he really likes the gorgeous man at the next desk. Casey tries not to check Logan out, but who is he kidding? From the start, despite their best efforts, neither man can resist the other. Sizzling chemistry leads to sex so hot they can both almost forget why they’re stuck in this office to begin with.

It would be perfect, except Logan can’t stop reliving wars he’ll never forget and Casey can’t stop grieving the SEAL he’ll never be. And they’ll never have a future together until they can make peace with their pasts.

My Review:
Logan Carter is a combat veteran and former Marine who is piecing his life back together. Surviving three combat tours didn’t prepare him for life as a civilian. We met Logan briefly in AFRAID TO FLY as Travis’ drunk boyfriend who embarrassed him at the Navy Ball. He’s been a Navy contractor before, and lost those jobs due to alcoholism–but he’s 6 months sober and in therapy to deal with his PTSD for the first time since he didn’t re-up seven years ago. Travis, good guy that he is, has pulled some strings to get Logan a last-chance job working in the training department, setting up schedules and teaching classes to enlisted sailors.

On his first day, Logan meets Gunner’s Mate 2 Casey Olson, a man grieving the loss of his lifelong dream of being a SEAL. He’d passed the many fit tests and even made it past Hell Week in BUD/S training, but a snapped lower leg in a training run on the loose beach sand brought his career to a swift halt. While he’s recuperating now, it’s highly unlikely that Casey will qualify for SEAL training due to this injury, and he’s having a hard time coming to terms with it. Still, working in the training division on light duty has it’s benefits. His co-workers are cool, and Logan? Logan is HAWT.

Would it be a bad idea to have some fun before he gets reassigned?

While Logan knows it’s a bad idea to mess around with a co-worker, he’s been celibate a long time. And, as they build a friendship in the office, the undercurrent of attraction grows. After a particularly hard day for Casey, Logan’s sympathy is more temptation than they can take, especially when a kiss follows the embrace. But, are they making a big mistake, or stepping into their future together?

There is a lot of awesome details in this book about combat vets and dealing with PTSD. I liked the day-to-day of it, getting into Logan’s head and seeing his issues up-close. It was also interesting how the fictional administration had made specific plans to ensure the personnel had safe spaces in which to work. I hope this is a true look at the reality of life for persons in the military, but I have to guess it’s not a complete picture. We get some deep insight into therapy, as well, and seeing Logan cope through his art was cool. Casey’s heartbreak was palpable, and his frustration at being consoled felt real. There was a moment near the end where he reached an unfortunate boiling point, but it marked the necessary turning point for communication between Casey and Logan. Because they had long passed the point of casual lovers into true boyfriends. I liked this one lots, and found the scorching sexytimes highly satisfying.

Interested? You can find WASH OUT on Goodreads, Riptide Publishing, Amazon, Barnes & Noble, iBooks and Kobo. I received a review copy via NetGalley.

****GIVEAWAY***
Click on this link to comment over on Book Reviews and More by Kathy to enter for a chance to win 2 backlist e-books from L.A. Witt.
Gook luck and keep reading my friends!

One thought on “More Than a WASH OUT–Military Monday Review and Giveaway!”