Hi there! Today I’m kicking off a new series I’ll call Military Mondays–focusing on books that have an active military, or veteran, character. This week I’m reviewing L.A. Witt’s RANK & FILE, which is the fourth book in her Anchor Point navy series. I’ve loved JUST DRIVE, AFRAID TO FLY and CHIEF’S MESS, and read forward into the series…but life got away from me and I’ve been collecting reviews for a while. 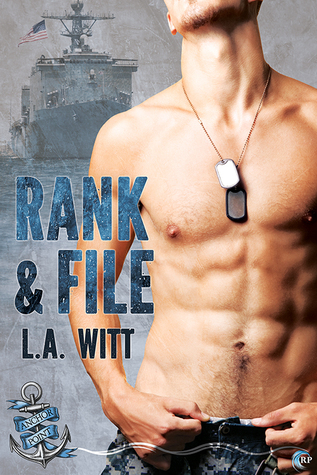 About the book:
Senior Chief Will Curtis is as straitlaced as they come. While his fellow Sailors have partied their way through their enlistments, he’s had his eye on the prize—making master chief and retiring after thirty years of service.

Lieutenant Brent Jameson is a Navy brat turned Annapolis grad. He’s lived and breathed the military his whole life, and he knows he’s destined for great things—once he’s done paying his dues at the bottom of the ladder.

When their paths cross, both men know better than to give in to temptation, but that doesn’t stop them. It also doesn’t keep them from coming back for more, even though being discovered would sink their careers. Something has to give—Will can retire, Brent can resign, or they’ll both face court-martial.

But there’s also the option neither wants to acknowledge: jump ship and walk away from each other instead of ending their careers over a fledgling relationship. And they should probably decide before they fall in love.

My Review:
Senior Chief Will Curtis meets Lieutenant Brent Jameson when he’s called to settle a domestic dispute on base. Will is a master-at-arms, a cop essentially, and Brent was (unknowingly) having a rendevous with a married woman when her husband arrived mid-scene. It’s, well, it’s humiliating for Brent. He’d never knowingly break rules like that, and he’s rather lucky the husband doesn’t press charges–for conduct unbecoming. That said, Will and Brent meet up off base by coincidence, as the nearby gay bar–and it’s hot. But…forbidden. Will is enlisted and Brent is commissioned. For a one off..okay. They could fake their way out of trouble if the “just met” and didn’t know each other’s rank.

But that’s not what happens. Because it’s good, and worth a second try. And a third.

Knowing their careers are at risk if discovered, Will and Brent begin to sneak around, even planning a weekend well away from base so they have the chance to wake up together after sunrise in a bed for a change. Their attraction becomes more than hooking up, with time spent chatting, acting as a partner would–if they could be partners. Will has a decade on Brent, and is angling for a career in the Navy–thirty years and full retirement. Brent, he’s only starting off his career, but it’s far more tedious than he anticipated. And, his folks (particularly his dad who’s retired from the Navy) are a struggle. They want him to be a high flyer like his elder brother, and why doesn’t he marry a good woman and settle down…

As it goes, though, it’s not long before there’s a discovery, and they need to either separate from each other, or the Navy…and it becomes a surprisingly easy choice, in the end. Well, not easy, per se, but manageable, and believable. I really liked both Will and Brent. They are good men, who make bad choices professionally in order to make up for denying their personal needs too long. And, it’s not to angst-ridden. I liked it lots, and found the scorching sexytimes highly satisfying.

Interested? You can find RANK & FILE on Goodreads, Riptide Publishing, Amazon, Barnes & Noble, iBooks and Kobo. I received a review copy via NetGalley.

One thought on “Falling Into RANK & FILE–A Military Monday Review”