Hi there! Today I’m sharing a review for a contemporary M/M British romance from JL Merrow. I really enjoyed CAUGHT!, OUT! and PLAYED!, the three books in the Shamwell Tales series, so I was eager to jump into SPUN!. I actually finished it over a month ago, but I got busy and forgot to post the review. O.o 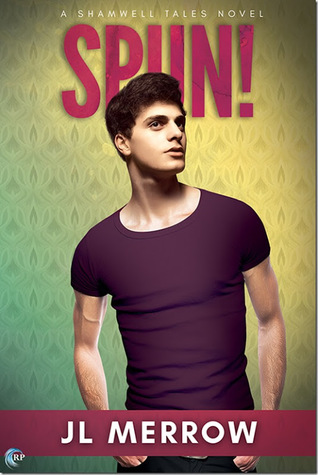 About the book:
With friends like these . . .
An ill-advised encounter at the office party leaves David Greenlake jobless and homeless in one heady weekend. But he quickly begs work from his ex-boss and takes a room in Shamwell with easygoing postman Rory Deamer. David doesn’t mean to flirt with the recently divorced Rory—just like he doesn’t consciously decide to breathe. After all, Rory’s far too nice for him. And far too straight.

Rory finds his new lodger surprisingly fun to be with, and what’s more, David is a hit with Rory’s troubled children. But while Rory’s world may have turned upside down in the last few years, there’s one thing he’s sure of: he’s straight as a die. So he can’t be falling for David . . . can he?

Their friends and family think they know all the answers, and David’s office party hookup has his own plans for romance. Rory and David need to make up their minds and take a stand for what they really want—or their love could be over before it’s even begun.

My Review:
David Greenlake is a flamboyant gay man with a deep desire to find Mr. Right. He’s a romantic, but he always seem to get involved with men who plan to use him. His mother argues that he should look for a blazing passion, but David really only wants a cozy hearth fire. He gets mixed up with a dashing older man, Xav, at a company party, unaware the man is married…to his boss’ sister-in-law. So, he’s immediately sacked.

He flees to the country, and his friend, Mark–who was once his boss and his crush. Mark and his partner Patrick live in Shamwell, and were the love story described in OUT! Mark is a decent guy, and helps David out with a part-time job, and finding him a room to let with Rory, Patrick’s mother’s ex-boyfriend. Rory is a divorced man, kind and doting on his two young children, and ashamed his wife left him for a wealthier man. He’s a guy with a giant heart, and he wears it on his sleeve. He’s a postman, and his attention to life in Shamwell is nothing short of intense–he notices people, and he’s sure to be a friend to anyone in need. That includes David.

Living in their close-quarters home is sweet for both David and Rory–they like the quiet life, and vegging out with shows on the TV or computer. David’s got a special friend, hew childhood teddy Geoffrey, that he sews dapper outfits for, and takes with him places. It’s charming to Rory’s children, Lucy and Leo. Especially Leo, who speaks to David as if they are old friends, when he doesn’t normally speak to anyone but Lucy, and certainly never to his overbearing stepfather. Rory has a decent relationship with his ex-wife, and wants more time with his kids, so he’s particularly happy to see that David gets on with them.

This is a slow-burn odd couple romance with Rory spending a lot of time pondering his unexpected attraction to David. David adores the closeness he feels with Rory, and his kids, and it’s almost like an instant family, without all the sexytimes. But, he wants the sexytimes, bad. It’s also problematic when Mark admits he doesn’t really have enough work to keep David employed long, and the alternative seems to be an offer from Xav to be his ‘kept boy’ as a piece on the side in London. It’s hardly a burning passion, and not even a shadow of the tenderness David experiences in the platonic hearth fires of Rory’s humble abode.

I loved the ending of this one, as it’s so happy on so many fronts. David and Rory find a way toward intimacy, and their little family is united in love. David makes changes that allow him to stay employed, and in Shamwell, without selling his body to a higher bidder, and he’s wiser and happier with Rory at his side. David has a bit of a child-like manner, what with Geoffrey Bear and his relating to all the kids he meets, but he’s a smart man whose childhood wasn’t complete and that leaves him sweetly vulnerable. Rory’s sure he’s not the sharpest knife in the drawer, but he’s smart about how to act in a relationship, and while it takes him some time to come to terms about his new attraction, he’s honest and unwilling to hide his love for David.

Interested? You can find SPUN! on Goodreads, Riptide Publishing, Amazon, Barnes & Noble, and Kobo. I received a review copy via NetGalley.

About the Author:
JL Merrow is that rare beast, and English person who refuses to drink tea. She read Natural Sciences at Cambridge, where she learned many things, chief amongst which was that she never wanted to see the inside of a lab ever again. Her one regret is that she never mastered the ability of punting one-handed whilst holding a glass of champagne.

She writes across genres, with a preference for contemporary gay romance and and mysteries, and is frequently accused of humour. Her novel Slam! won the 2013 Rainbow Award for Best LGBT Romantic Comedy and her novella Muscling Through and novel Relief Valve were both EPIC Awards Finalists.