Hi there! I’m so excited to share a review and giveaway for a new M/M romance out today from Lane Hayes. LEANING INTO ALWAYS is book 1.5 in her Leaning In series, and follows the love story of Eric and Zane, two seemingly mismatched lovers from the same place but definitely not the same life. I really liked LEANING INTO THE FALL, so I was eager to get back to these Bay-area romances.

Scroll down for an excerpt and to enter to win a $10 GC. 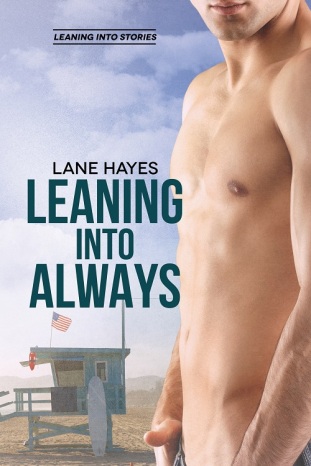 About the book:
Life is good for Eric Schuster. He owns a highly successful tech company, has a great group of buddies, and he’s about to marry the man of his dreams. Eric is pleasantly surprised to find the transition from friends to lovers has been easier than he thought. However, after running into an overly friendly ex-boyfriend on an impromptu trip to their shared hometown, Eric realizes things are about to get complicated.

Zane Richards is a quintessential California surfer dude turned professional sailor. His laid-back approach has helped him navigate difficult times in his life. Eric may not share his easy-going mindset but Zane knows without a doubt Eric is the one. However, carving a future together may require confronting a piece of the past Zane thought he’d left far behind. Both men will have to decide if they’re willing to risk what they know for a chance to lean into always.

“Hmm. I want to drop this, but…I have one last question. What did you mean about ‘being from here?’ I know San Francisco is home now but this is a nice place too. I always thought it would be kind of cool to move back someday so I could—”

“No. No way. Never,” I replied emphatically.

I tried and failed again to make a getaway. Zane pounced on me and held me down, snaking his arm across my chest to keep me next to him.

“I can’t explain it. You wouldn’t understand.”

“It sounds stupid.” I met his patient gaze, hoping he’d cut me some slack, but he didn’t budge and I had a feeling he wouldn’t until I spit it out. “Fine. I was teased pretty mercilessly for being a geek from kindergarten through high school. I never fit in. I wasn’t blond, athletic, or particularly charming. I was smart. Smarter than I appear to be now,” I huffed.

“Who bullied you? I’m gonna kick some ass. No one messes with my man,” he said, nuzzling my neck.

I chuckled, running my fingers along his spine. “Thanks. I told you it sounded lame. I’m a perfectly well-adjusted adult when I’m not here. And I’m actually pretty good when I come for quick family visits, but this feels different. It feels like I’m being thrown back in time and forced to hang out with the cool kids. Today was a great example. I made a fool of myself out there and I made you mad. Yeah, I was jealous but that was only part of it. I also wanted to prove I’d grown up a little and that I wasn’t the same sunscreen-caked dork who’d sit under an umbrella and read when he went to the beach anymore. I guess I still am.”

“You seem to be forgetting one major detail, Er.”

I traced the laugh-lines at the corner of his eyes and pushed his hair from his forehead. “What is it?”

“I like you just the way you are. I don’t expect you to change and develop a sudden passion for things I enjoy doing. Just be you. And if that means you’d rather finish a chapter lounging in the sand than jump in the water, that’s okay by me.”

“Don’t thank me. It comes with the territory. I wouldn’t want to spend the rest of my life with you if I didn’t love all your weird habits,” he teased, pulling us both to sit up.

“Weird? Me? I bet you can’t name three weird things about me,” I declared as I sauntered toward the bathroom.

“I bet I can name ten. I’ll give you my list at breakfast. Jump in the shower while I call housekeeping and ask them to change our sheets.”

I stopped in the doorway and frowned. “Just tell them I spilled water on them or something.”

I shook my head mournfully and turned on the shower to drown out his silly speech about being stuck with a messy lover and crusty sheets. I chuckled at his ‘put upon’ tone and called for him to join me before stepping under the spray. I stopped abruptly and backed up to look at my reflection. My cheeks were flushed, my eyes were bright, and my smile spanned my entire face. I was incredibly happy and if I said so myself, it looked good on me.

My Review:
Eric Schuster and Zane Richards are months away from their wedding, and all is great when they can live their idyllic life in San Fransisco. That’s where Eric feels at home, despite he and Zane both growing up in Orange County. They went to the same high school, but Eric was an awkward teen, teased and bullied from early youth for his apparent “gay”-ness. And, he was gay, and he was out, because he couldn’t avoid it. Zane was strong, popular and athletic, a poster boy for Cali surfers and secretly bisexual. While Eric grew up having all his material needs met, Zane’s single mom worked overtime to provide the basic necessities. They both ended up at the same college, and gravitated toward one another as friends for years before they started dating. Most days, Eric feels like he’s dreaming; engaged to marry his teen crush who is (to Eric inexplicably) his dear friend. And, he’s over the high school mentality, until he and Zane need to return to Orange County for Zane’s work and to catch their folks up on the wedding plans.

Zane is a professional sailor who sells yachts for a living. It’s a sweet gig, but Eric’s not the first mate-type. He’s barely getting his sea legs, in all truth. One of Zane’s biggest clients is Don Carrigan, a wealthy blowhard of an investor who’d put a lot of money into Eric’s company as a start-up, and who’s not so happy that Eric’s business partner, Nick, broke off the engagement to his daughter.

Still, he wants to keep Don happy, and Don’s in the market for a new yacht. That means a trip to Orange County on the hunt for just the right boat. It also reconnects Zane with the man he’d lost his virginity to years ago: Dean. Dean was a couple of years older than Zane and Eric in school, but Zane and Dean had a lot of time to experiment. They wouldn’t have ever considered coming out as bi, then, and Dean’s not wild about the prospect now, but he seems to keep popping up and being uber-helpful in Zane’s quest for the perfect yacht. And Eric’s not convinced that Dean’s interest is all water long past a bridge.

This book is told from Eric’s point of view, and it’s really a vulnerable look into long-held insecurities. He struggles with Zane’s relationship with Dean, which is purely professional, because of the high school awe he’d placed on Zane,and to some degree Dean. They were/are the beautiful people, and he’s, well, he’s less gawky now. And he looks good in a suit. But, what if Zane thinks Dean’s a better match, because they share so many physical interests? Eric can’t surf, he’s only learning to sail and they don’t have the same shared history that Dean and Zane do. His suspicions are magnified by Dean’s constant presence, even in their home up in San Fran. It’s getting to be way to much for Eric to stay silent about. And, well, he feels pressured to stake his claim on Zane, even when it stretches his physical limits.

This is an engaging and sexy read, and I loved getting to know Eric and Zane better. I didn’t read the first book in this series, and I think I would have liked to, just to see how these guys morphed their friendship into love.

Interested? You can find LEANING INTO ALWAYS on Goodreads and Amazon.

Click on this Rafflecopter giveaway link for your chance to win a $10 Amazon GC.
Good luck and keep reading my friends!

About the Author:
Lane Hayes is grateful to finally be doing what she loves best. Writing full-time! It’s no secret Lane loves a good romance novel. An avid reader from an early age, she has always been drawn to well-told love story with beautifully written characters. These days she prefers the leading roles to both be men. Lane discovered the M/M genre a few years ago and was instantly hooked. Her debut novel was a 2013 Rainbow Award finalist and subsequent books have received Honorable Mentions, and were winners in the 2016 Rainbow Awards. She loves red wine, chocolate and travel (in no particular order). Lane lives in Southern California with her amazing husband in an almost empty nest.

5 thoughts on “Hard to Trust LEANING INTO ALWAYS–Review and Giveaway!”