Hi there! I’m sharing a review for a contemporary romance from Daisy Prescott. WANDERLUST is a romantic comedy that spans three continents, but it’s previous title, Missionary Position, had some…difficulites. It kept getting mixed in with books about Mother Teresa. Or, more erotica-type books. And this book is neither. It’s a sweet and snarky romance and kept me entertained. 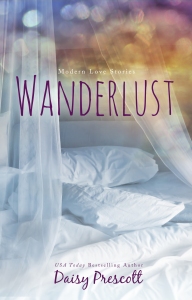 About the book:
“A captivating story about life, love, and an exciting and unintentional quest for self-discovery.”
Selah Elmore is a confident, curvy woman who knows exactly who she is and what she wants. Her less-than-stellar love life is another story. Hoping for a fresh start, she leaves her home and job in the Pacific Northwest to spend six months in West Africa.

After accepting an offer from a stranger in an airport bar, Selah’s real adventure begins during a stopover in Amsterdam. Will the daring, mysterious Kai show her what love really is?

Sparks fly on three continents when perpetually single Selah discovers there’s more to love and life than she ever imagined.

Wanderlust is book three in the Modern Love Stories series. It’s a spin-off/standalone from Geoducks Are for Lovers.

My Review:
Dr. Selah Elmore studies depictions of the female form in tribal art. She has a 6-month sabbatical planned in Ghana to study fertility relics in the local museum, and on the way she’s going to the Netherlands for an exhibit opening and auction of more relics–which helps support her research.

While eating sushi ate JFK airport, Selah meets Anita, a beautiful Dutch woman, and they hit it off. Anita insists that Selah look up her brother, Gerhard, when she arrives in the Netherlands, and Selah’s a sex-positive 40ish woman, so she decides to do exactly that. Gerhard turns out to be aligned with the sponsors of the exhibit Selah went to view, and they strike up an acquaintance that sparkles with possibility, but Selah doesn’t push for more–to her chagrin. Still, Gerhard’s contacts span the time after she leaves for Ghana, and Selah relishes every one of those texts.

Getting settled in Ghana isn’t difficult; Selah makes friends easily, but she keeps everyone at surface level–including Gerhard. Well, at least until Gerhard pops in unexpectedly, with a plan to join Selah while he works on some of his micro-financing plans in Africa. There are a lot fo misconceptions/misunderstandings they need to work through, but the super-hot monkey sex Selah had craved back in Europe is now on the table (and the bed and wherever they land) in Ghana.

This is a longer-style romance, as Gerhard and Selah have a few months of time to spend exploring each other, Ghana, and the possibility for a real relationship. Selah is not accustomed to being wanted for more than a fling, and is apprehensive about being hurt by Gerhard–though I didn’t quite get why. She makes a pretty quick jump overboard when Gerhard seems to be willing to make things more permanent–and it’s always Gerhard that’s the pursuer, here. I really liked him, and Selah was funny, but narrow-minded. The end is really sweet, with Gerhard winning her back spectacularly. I totally enjoyed the setting descriptions, and often felt like I was on safari in these exotic (to me) locales.

About the Author:
USA Today Bestselling author Daisy Prescott lives in a real life Stars Hollow in the Boston suburbs with her husband and an indeterminate number of imaginary housegoats. When not writing about people falling in love, she can be found traveling, gardening, baking, and reading a good book. Her novels include the Modern Love Stories series, the Wingmen series, and several short stories. She’s also working on expanding the world of Bewitched this fall.

One thought on “Finding Love and WANDERLUST–A Review”