Hi there! Today I’m sharing a review and giveaway for a new contemporary interracial M/M romance from Jude Sierra. IDLEWILD is a quiet and tender romance between a white widower restauranteur and the captivating, young black waiter he hires. It’s been named a Kirkus Best Book of 2016, and I really liked it.

Catch an excerpt below and be sure to get in on the giveaway for a $25 GC or on of five free books! 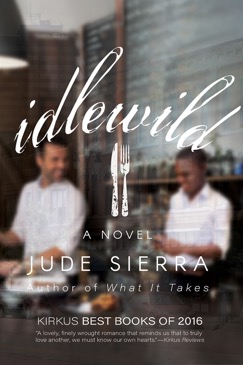 About the book:
Asher Schenck and his husband John opened their downtown gastro pub in the midst of Detroit’s revival. Now, five years after John’s sudden death, Asher is determined to pull off a revival of his own. In a last ditch attempt to bring Idlewild back to life, he fires everyone and hires a new staff. Among them is Tyler Heyward, a recent college graduate in need of funds to pay for med school.

Tyler is a cheery balm on Asher’s soul, and their relationship quickly shifts from business to friendship. When they fall for each other, it is not the differences of race or class that challenge their love, but the ghosts and expectations of their respective pasts. Will they remain stuck, or move toward a life neither of them has allowed himself to dream about?

Today when Asher greets him, he seems more present. Tyler knew this place was in dire straits, but if he needed confirmation, the harried expression on Asher’s face when they first met was it.

Although his clothes hint that he’s tried to put himself together, his hair is a mess. It’s longish, with a hint of curls and is the kind of tousled only some men can pull off. Though deep brown, Tyler can see some gray at the temples. Asher has dark eyes and sports the shadow of a beard. Despite the pallor of his skin that indicates he hasn’t gotten sun in a long time and his slightly sloppy appearance, Tyler can’t help but notice how handsome he is. He’s taller than Tyler by a few inches—most men are. He has no idea how old Asher is—it would hardly be polite to ask—but he thinks maybe in his thirties. That’s hardly old, but it’s older than he; that’s never been an attraction. But, it’s working right now. Tyler swallows and smiles.

“So,” Asher starts. He sits at the same table. It’s just as covered in paperwork. “What are your thoughts about working here?”

“I am strongly considering it.” Asher doesn’t smile but his eyes are friendly.

“It would be great to work here,” Tyler says. “Really. This building has a vibe.”

“Oh, I don’t know. Something here feels right.” He wonders if he’s making a fool of himself. Tyler sometimes can sense the energy of a person or place. It’s nothing he seeks—but some people and places he’s encountered just feel right.

Empty, Idlewild brims with potential. It’s a building with great bones, long but narrow, with high groin-vaulted ceilings and a bar that curves down the length of the front-of-house floor. Cream-colored wainscoting lines the bottom of the walls—he sees it running up the stairs to the second floor—and the walls are a rich deep red that’s brightened and warmed by an eclectic assortment of antique lighting fixtures. Wide wooden steps with carved spindles lead to the second floor seating area. The dark wood and walls are offset by light through the large glass window.

“Well, I hope so.” Asher looks around, then shrugs. “Or that I can make something of it.”

Asher tilts his head with a tiny smile quirking his lips.

“Well, if you wanna take a chance on me, which I recommend, I want to help you with that.” Tyler smiles as warmly as he can and is gratified when Asher’s eyes catch his. They share a second of eye contact that leaves Tyler short of breath. He looks away quickly.

My Review:
Mired in grief over his dead husband, John, Asher’s trying to restart his life by restarting their restaurant, IDLEWILD. His depression and grief caused him to pull back the reins, and his staff had gotten lax and disaffected in those five years. So, he fires his staff, sells his condo and pours all that money into hiring all new personnel, from busboys to chefs. Tyler, a young, intriguing black man has the kind of spark that catches peoples eye–even Asher.

Tyler’s been dating Malik for a couple years, but they’ve been off-and-on, and Tyler’s pretty sure that Malik’s not as captivated, no matter how much Tyler tries to catch his eye. They’re in different places in life, too. Malik’s still in college, and Tyler’s newly graduated–and revising his career plan which had included med school. Taking the job at Idlewild opens Tyler in a way he’d been looking for. He senses the energy of the place, and thrives in the community he forms in the restaurant. Malik isn’t happy–he thinks all the folks “revitalizing” Detroit’s Downtown are doing a disservice to the people who’d lived here for decades, whose efforts are often overlooked.

When Malik feels that Tyler’s a bit too enchanted with his boss, Asher, he cuts out–it’s not personal. Malik wants to be free, and he recognizes that there’s a good chance Tyler and Asher could build a solid relationship. Asher’s responsive to Tyler’s needs, and they seem to connect very well–but each man’s putting up a brave front. Tyler wants to be whatever his partner needs, often overlooking his own needs in the process. Meanwhile, Asher still hasn’t come to terms with the loss of John, he’s a shell of a man; Tyler’s breezy personality is so attractive to him, yet brings on the guilt, too.

I really enjoyed the book, which has a lovely cadence to the prose. The story had more issues regarding class than race, with Tyler educating Asher that “lack” isn’t necessarily “deficient” and privilege isn’t always the best filter for decision-making. The class-struggles of urban Detroit are similar to those I’ve observed growing up in/near Chicago, so this was very relatable, for me. Tyler’s developed a facade of being a bright spark, to hide his innate insecurity, which was bittersweet to experience. I was really glad to see him open up and tell Asher how he truly felt, and how Asher’s unwillingness to move on from John was a life of survival, not actual living. Asher isn’t sure he can give himself fully to another man–especially such a young one as Tyler; he thinks Tyler’s just biding his time before finding a younger, more suitable, partner. Nonetheless, these guys are sweet with each other. They are also hungry, and desperate to find a person who can fill their emptiness. The resolution is comforting and lovely, with both Asher and Tyler expressing their needs, and building a much stronger rapport. The success of Idlewild isn’t an accident, and it seems Asher’s new life is one John would have been proud to share.

Click on this Rafflecopter giveaway link for a chance to win a $25 GC from Interlude Publishing or one of FIVE copies of IDLEWILD.
Good luck and keep reading my friends!

About the Author:
Jude Sierra first began writing poetry as a child in her home country of Brazil. Still a student of the form, she began writing long-form fiction by tackling her first National Novel Writing Month project in 2007, and in 2011 began writing in online communities, where her stories have thousands of readers. Her previous novels include Hush (2015) and What It Takes (2016), which received a Starred Review from Publishers Weekly.