Hi there! Today I’m sharing a review for a contemporary romance from Lucy Felthouse and Victoria Blisse. THE BILLIONAIRE AND THE WILD MAN is a sweet and tender love story between a hotel magnate and the off-the-grid veteran she meets while on holiday.

Catch the author’s note, a sexy excerpt and enter the multi-book giveaway below. 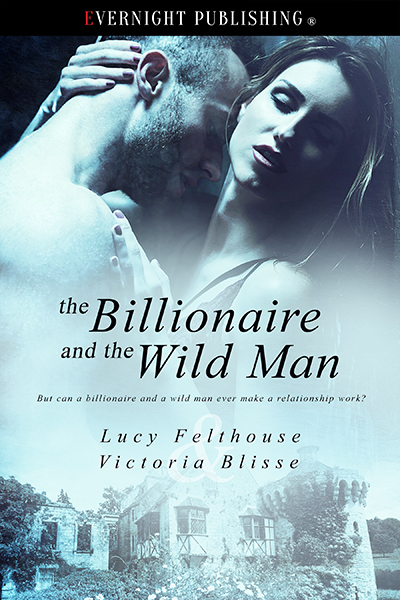 About the book:
Flynn Gifford is enjoying a simple existence in a rural Derbyshire village when Caroline Rogers crashes into his life, barefoot and panicked.

Their lives could hardly be more different—she owns a successful luxury hotel chain, and he’s a penniless nomad who’s off the grid—yet neither can deny the attraction that burns between them. As Caroline reluctantly starts to open up to him, Flynn finds himself divulging some secrets of his own, secrets he thought he’d take to his grave.

But can a billionaire and a wild man ever make a relationship work, or will their secrets keep them apart?

Thoughts on writing from Victoria Blisse…

Can you Co-Write a novel with a Friend? By Victoria Blisse
I’ve been a published author for 10 years now and until recently I’d never co-written anything. Sure, I’ve batted ideas to and forth with other authors before now, played around with story ideas but they’ve never turned into anything more.

But now, I have written a novel with my partner in Erotica (not crime, well, least not yet) Lucy Felthouse. We’ve been mates for ages, Northern birds with very similar senses of humour and both part of the amazing Brit Babes. We’ve talked about co-writing for ages and then BOOM. We did it.

What was it like? Well, it was fun. No, I’m not just saying that because Lucy will read this, it really was. I got instant reaction to each chapter I wrote and it was a challenge to keep the story going. I’m not sure we expected it to be a novel when we started but Carrie and Flynn just wouldn’t get it on! There’s loads of hot chemistry and snogs but blimey, it was hard work getting them into bed together.

I had an on hand editor to pick me up on stupid things like changing the Doctor’s name from chapter to chapter and someone to help get past those plot holes. 2 heads are better than one for that, definitely.

Would I co-write a novel again? Yeah, I think I would. It’s different but variety is the spice of life.

Would I co-write a novel with Lucy again…

I have to say yes, or she’ll thump me. 😉 Actually, more to the point, would she want to write with me again? If she does, I reckon another Blisse/Felthouse best seller will soon come around.

Now, I’ll leave you with an excerpt that really made both me and Lucy laugh!

Worst end to a romantic picnic?

I want to fuck him. I want to feel him inside me. The words of invitation hover on my lips when I hear a shrill bark. We both stop, lips locked, and listen. All I can hear at first is our panting breaths, but then the yip of a little dog clearly sounds on the air. I snatch my hand from his pants, and Flynn pulls back from me. Just as a wet doggy nose hits an exposed patch of flesh on my back.

I yelp then turn to see the little Jack Russell looking at me with a mischievous glint in its beady eye. Cock-blocked by a bloody dog. Nice. The dog leaves me alone and pounces on the cocktail sausages.

“Skipper, behave!” A shrill voice yells, drawing my gaze up to meet the white-haired woman in chintz blouse, navy skirt and heavy duty sandals walking towards us. “Skipper, get out of it! Skipper, stop!”

The dog doesn’t even flutter an eyelash, just continues eating.

“I’m so sorry.” The lady gasps as she bends down to pull on the recalcitrant dog’s collar. “He’s such a naughty little thing.”

Skipper is clipped onto a lead, but his little tail still wags. Nothing’s going to get him down, especially now he’s got a belly full of sausage.

“I’ll leave you two in peace to enjoy your picnic now.” She smiles. “It’s a lovely day for it.”

“Thanks,” Flynn finds his voice and chips in. “Enjoy your walk.”

She waves and drags the little dog behind her.

Ha! That made me giggle when I read it too!

My Review:
Caroline Rogers is a self-made woman having a rough patch. She owns a luxury hotel chain, but got caught up in all the pressure and had a bit of a meltdown. Now, she’s in northern England recuperating under the watchful eye of her harping mum. She’s seeing a psychiatrist every few days and trying not to strangle her mother for being a mean-spirited, overprotective nag; their relationship has always been problematic.

After a particularly gruesome shouting match, Caroline hopped over the stone wall at the back of the garden and encountered Flynn Gifford, a clearly unkempt homeless man, picking up litter as an odd job. He’s sweet and a little saucy with her, shaking her from her doldrums. Carrie wants to forget all her troubles–personal and professional–so she joins Flynn in the work, despite being barefoot and half-hysterical. They pass the time talking, and both open up; Carrie about her breakdown, and Flynn about his career in the Armed Service, and how he’s AWOL after a mission went bad. The lack of judgment on either side is refreshing for both. As a favor, Carrie invites Flynn to return to her mum’s house later, when she knows her mother will be gone, so he can get a shower and shave.

The attraction that had developed during their talk is only bolstered by increased company. I’d thought this book would be erotica, honestly, but it’s more a straight romance. These two lost souls find each other at just the right moment. They each need support and comfort, and a little bit of protection, too. They pass a few days together, and it looks like Carrie’s about to propose something wild, but before they can get too far Flynn does what he needs to do: account for himself with the service. He can’t very well court a woman like Carrie if he’s off the grid, can he? Plus, he’s got loads of pride and wants to be able to make something of himself, other than a beggar boy-toy. Not that Carrie ever treated him as such. Her heart’s broken when she finds him gone, but that break is necessary for both Carrie and Flynn to put their respective worlds in order.

I really liked this one. It was honest and practical, and still very sexy and emotional. These two get battered a bit in life, no matter their financial circumstances, and they’re guarded. Giving confidence to a stranger was never in the plan, yet it worked so beautifully for those shining moments. Flynn’s a stand-up guy, who won’t let Carrie boss him around, though, and when he makes good on his promise to find her once he’s made his amends I really felt for him. She doesn’t make apologizing  easy, but I understood that too! Her heart was torn up, and she’s finally gotten over him, only to have him return?

Still, the reunion is sweet (after all the shouting and tears!) and the future looks brighter than ever before. It’s tender and touching and real. I really enjoyed it!

Interested? You can find THE BILLIONAIRE AND THE WILD MAN on Goodreads, Evernight Publishing, Amazon, BookStrand, Barnes & Noble, iBooks, Kobo, and All Romance eBooks.

She is the mistress of Smut UK putting on Smut Events, Days & Evenings dedicated to erotica, socializing, fun and prizes. Check out Smut Nights, Smut by the Sea: Scarborough, and Smut Manchester for more info.

Born near Manchester, England, her northern English quirkiness shows through in all of her stories along with her own particular brand of humour and romance that bring laughs and warm fuzzies in equal measure.