Hi there! Today I’m sharing a review for a contemporary YA romance with a dark storyline from . GIRL ON THE BRINK deals honestly with domestic abuse for a teen girl experiencing her first relationship.

Catch my review and enter below to win a $10 GC in the giveaway! 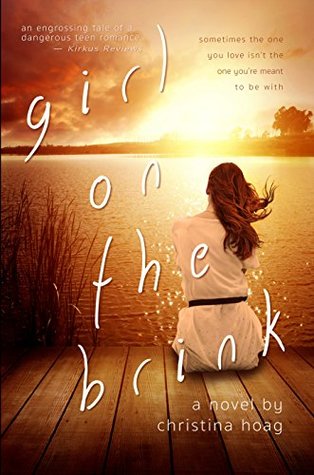 About the book:
The summer before senior year, 17-year-old Chloe starts an internship as a reporter at a local newspaper. While on assignment, she meets Kieran, a quirky aspiring actor. Chloe becomes smitten with Kieran’s charisma and his ability to soothe her soul, torn over her parents’ impending divorce. But as their bond deepens, Kieran becomes smothering and flies into terrifying rages. He confides in Chloe that he suffered a traumatic childhood, and Chloe is moved to help him. If only he could be healed, she thinks, their relationship would be perfect.

But her efforts backfire and Kieran becomes violent. Chloe breaks up with him, but Kieran pursues her relentlessly to make up. Chloe must make the heartrending choice between saving herself or saving Kieran, until Kieran’s mission of remorse turns into a quest for revenge.

“Girl on the Brink is a must have for every high school and public library.” – Isabelle Kane, Wisconsin high school librarian

ABOUT TEEN DATING VIOLENCE
Abusive relationships are widespread, cutting across socioeconomic, racial and ethnic, religious and gender preference lines. One in three high school girls experience dating violence, while more than half of college-aged women reported experiencing controlling behavior in a relationship. Eighty-nine percent of female college students said they were unable to recognize the signs of an abusive relationship, and a third of teens involved in intimate partner violence ever told anyone about it.

For more information, please head to Break The Cycle.

My Review:
Soon-to-be high school senior Chloe is a girl who’s world is in flux. Her father recently moved out of their New Jersey home to live with his girlfriend in Manhattan. Her mother’s depressed, alternately taking anti-anxiety meds or alcohol to cope with her sudden heartbreak. Chloe’s brother is away at summer camp, as is her best friend. It’s a virtually empty home, and it’s unsettling. Even if her mom’s there, she’s withdrawn or asleep.

Chloe has an internship at her town’s weekly newspaper, and she meets Kieran while out doing an interview for the paper. He’s two years older and seems engaging and charming. He sympathizes about her family issues, confessing his own youthful trauma, and they bond quickly. Also, Kieran isn’t like other boys who seem to only want sex. He woos her with dates and conversation, shares his grand dreams to become an actor and makes Chloe feel wanted and loved at a time where she’s feeling lonely and abandoned by family.

Soon, however, Chloe begins to notice that Kieran is constantly shielding her from her friends, and he’s cajoling her into doing what he wants all the time. He’s attentive in a way that’s becoming problematic–stalking her physically or via phone calls at work. Whenever Chloe attempts to assert herself, or her independence he’s right there, convincing her how much he loves her, and how they really fit together emotionally. They are physical with each other, and Chloe believes Kieran’s “truth,” but it gets difficult to manage his mood swings. He’s erratic, and jealous, and gets angry quickly, followed by dramatic apologies and presents.

Each time Chloe recognizes that Kieran’s love for her is obsessive, he convinces her to make more and more sacrifices for his wishes. She has so few ties at this point, that his sabotage easily severs her flailing friendships. All along there’s been small instances of physical abuse, beginning with intimidation and escalating into pushes, shoves and one harrowing weekend where Kieran essentially keeps Chloe prisoner in her own home.

It’s then that Chloe finally reaches out. Her mother’s able to be responsive, and act as an advocate, though the problems haven’t ended. I liked the story, and felt like it was an important one to tell. Also, it’s written in an accessible way, seeing how slowly domestic violence can creep into a relationship. Chloe is a good student, and good kid. Her family is middle class, and her friends are normal. She’s an Everyday gal, who can’t comprehend the danger she’s in until she’s literally running for help.

Part and parcel with Chloe’s situation is her embarrassment that she could be dating an abuser. She often wonders how she could have been foolish enough to fall for Kieran, but she also misses the way he made her feel cherished and loved. He’s two people in her mind: Sweet Kieran and Mean Kieran, which is a common experience for abuse victims. There’s a lot of honest self-reflection in the story, and guides the reader to understand the underpinning signs of abuse, and emotional manipulation. Chloe’s lucky that she was able to get help when she did, but she makes further (common) mistakes in how she shuts Kieran down. People wonder why women don’t report abuse, or why they allow their abusers to return–some of this complicated cycle is very plainly demonstrated in the book, and that’s a powerful object lesson for younger readers, in particular.

Interested? You can find GIRL ON THE BRINK on Goodreads, Amazon, Smashwords, Kobo.

Click on this Rafflecopter giveaway link for your chance to win a $10 Amazon gift card.
Good luck and keep reading my friends!

About the Author
Christina Hoag is the author of Girl on the Brink, a romantic thriller for young adults (Fire and Ice YA/Melange Books, August 2016) and Skin of Tattoos, a literary thriller set in L.A.’s gang underworld (Martin Brown Publishing, September 2016). She is a former reporter for the Associated Press and Miami Herald and worked as a correspondent in Latin America writing for major media outlets including Time, Business Week, Financial Times, the Houston Chronicle and The New York Times. She is the co-author of Peace in the Hood: Working with Gang Members to End the Violence, a groundbreaking book on gang intervention (Turner Publishing, 2014). She resides in Los Angeles.

2 thoughts on “Dangerous Love: GIRL ON THE BRINK–Review and Giveaway!”