Hi there! Today I’m sharing a review for a contemporary military M/M romantic suspense novel from Jamie Lynn Miller. ROGUE SOLDIER is the second book in her series, and is probably best enjoyed if you’ve already read BROKEN SOLDIER, but it’s not a requirement. 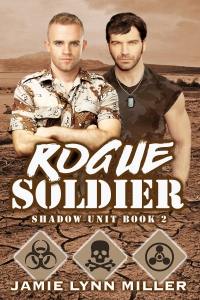 About the book:
Shadow Unit may have overturned the illegal arms cartel in Kuala Lumpur, but the harrowing undercover op left emotional scars on Sergeants Shawn Weller and Connor Finley. Slowly, patiently, they piece their partnership back together, closer now than ever before.

But the arrival of Julian Montgomery, Shawn’s former CIA handler and lover, threatens to tear them apart. Julian knows all of Shawn’s secrets as well as the past Shawn has kept hidden from Connor. Now the self-serving Julian wants Shawn back—with the CIA and with him. No one will get in his way. Including Connor.

When the joint Shadow Unit/CIA mission to stop the supplier of a deadly biological weapon goes sideways, Connor is captured, tortured, and used as a human test subject. It’s a race against time to save his life. But who can Shawn trust?

And who has gone rogue?

My Review:
Connor and Shawn are a committed couple who are also operatives in Shadow Unit, a covert ops coalition that includes former SEALs, CIA and MI5 agents and other paramilitary professionals. In this book, Connor and Shawn have healed from their last mission–one where Shawn was continually drugged and forced into sexual contact with an arms dealer.

Their newest mission goes a little sideways when an innocent gets in the way of Connor’s kill shot. Add to his horror, their team is immediately shipped out to attempt a capture of a biological weapon developer in Pakistan. That’s not out of the ordinary, but their new contact is not a friend. Julian Montgomery was CIA, a “wetwork” specialist who relished killing his targets. Shawn didn’t share the same bloodlust, and it was part of why he left the CIA, and Julian, behind four years ago–despite he and Julian becoming lovers.

Julian hasn’t forgotten his connection with Shawn, and he makes it clear he’d like to pick up where they’d left off. Connor isn’t willing to let Julian wander right into his relationship, however. And, Shawn’s deeply unsettled about any mission that Julian is managing. Shawn’s digging doesn’t reveal any issues, though, and he’s beginning to doubt his doubts…until their operation goes really really bad.

Is it coincidence, or a convenient? I liked this book better than BROKEN SOLDIER, because I really struggled with the drug aspect in that book. It was outside my comfort zone. It gave a darker edge to the book, because it intimated dubious consent. In this book, the lines are clearly drawn. There are VERY dark moments, and what was supposed to be a clean job gets so FUBAR that both Connor and Shawn are clinging to life. The likelihood either may die, or live but be permanently disabled, is extremely high. I don’t want to spill the details, but the suspense is really well managed, and the end arrives with sweet plausibility. There’s enough confusion regarding Connor’s injuries, in particular, that his recovery is just the right side of miraculous–not edging into unreal, but you’ll understand how it could have gone that way. I was glad for the author’s deftness, because I kinda hate when I read books where it’s all brushed over and super implausible but happens anyway because reasons. That said, the love between Connor and Shawn is completely unshakable in this book, and that was really pleasant to experience. These guys no how to get it on, and on…

The book ends with a reasonable resolution, and a promise for more stories. To that I’ll say: I’m in!

Interested? You can find ROGUE SOLDIER on Goodreads, Amazon (US and Amazon UK) Barnes & Noble, KOBO, and AllRomance.

You can also check out my review for BROKEN SOLDIER here and see if it’s in your reading wheelhouse.

About the Author:
Jamie Lynn Miller has been writing male/male fanfiction stories for nearly fifteen years and decided to take the plunge and go pro in 2008. She’s a romantic at heart, and her stories reflect the desire we all have to find “the one”, persevering through trials and heartache for that happy ending.

Jamie has a degree in Fine Arts and has spent the last thirteen years working as a Graphic Designer. She was born in Chicago and still lives there today, with her husband and their furry, four-footed “children”.

Besides writing, Jamie enjoys traveling, softball, reading, science fiction, hanging out with friends, and just being creative. She is eternally thankful for all of the love and support her husband has given her over the years with her writing and other endeavors.

2 thoughts on “Lives Destroyed by a ROGUE SOLDIER-A Review”