Hi there! Today I’m wishing a happy book birthday to a new contemporary M/M romance from Annabelle Jacobs. ALL HALLOWS’ EVE is a witches brew of danger when a centuries-old spirit returns to the present. I’m nearly finished with the book, and loving all the nuances! A perfect October read… Bwa-ha-ha-ha-ha!

Catch the excerpt below and be sure to enter to win a $10 giftcard in the giveaway! 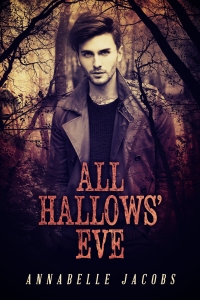 About the book:
Will a centuries-old broken heart ruin the promise of new love?
Dominic Ashworth is descended from a long line of witches, although the family practice of witchcraft died out generations ago. Forever connected to a dark history, the house he grew up in remained in the Ashworth family for generations until his estranged father sold it.

On a mission to check out the new owners, Dominic runs into Caleb Jones and gives the gorgeous man his phone number—but getting a date should be the last thing on Dominic’s agenda.

Caleb and his best friend, Zach Briceworth, are oblivious to the heartache and magic tied to the foundations of their new home. When strange things start to happen, the truth emerges and surprises them both, especially as everything revolves around Caleb’s new love interest.

After a shaky start, Caleb and Dominic settle into an easy relationship, falling faster than either of them expected. But with Halloween approaching, the possibility of danger increases. The past is not always as it seems, and the ripples of a tragic event threaten to put an end to everything between them.

Dominic jumped, startled, and turned to face the stranger jogging towards him. Tall, broad-shouldered, wearing black running shorts and a bright blue T-shirt, his short black hair—longish on top—stuck to his forehead in a sweaty mess. He came to a stop in front of the gate and leaned on it, breathing heavily. “Sorry … just need to … catch my breath.”

“A little hot for running, isn’t it?” Dominic’s gaze ran the length of the stranger’s body and he flushed as he caught himself.

“I don’t mind. Can I help you with something?” The guy then proceeded to lift the bottom of his T-shirt and wipe his face with it.

“Um.” Dominic swallowed. The flat, toned stomach on display reminded him of how long it had been since his last boyfriend. Although he used that term loosely. “Do you live here?”

Oh. So either Zach was living with his parents, or Briceworth senior had left his wife and moved in with a hot younger guy.

The guy narrowed his eyes as he looked at Dominic closely. “Why do you ask?”

The Sold sign lying just inside the gate on the ground caught Dominic’s eye. He smiled and attempted to look sheepish. It was always best to stick to the truth where possible, so he said, “Sorry, I was just curious. My sister and I used to live here, and when we heard it’d been sold, we wondered who’d bought it.”

The guy frowned at him and cocked his head to one side, clearly suspicious.

Dominic needed to nip that in the bud. He wouldn’t get any info if the guy thought he was a crazy stalker. “God, I’m not explaining myself well at all. My dad was the one who sold it to you. The place was in my family for generations. I haven’t spoken to my father in seven years. When we found out he’d sold the house, it was a bit of a shock, and I guess I just wanted to see who’d bought it. I don’t mean to come off as weird or anything.” He smiled and stuck out his hand. “Dominic Ashworth.”

The guy smiled back, took his hand in a firm grip, and shook it. “Caleb Jones. And it’s a little weird, but lucky for you I’m okay with that.”

I’m really enjoying this one, and look forward to sharing my review soon!

Interested? You can find ALL HALLOWS’ EVE on Goodreads, and Amazon.

Click on this Rafflecopter giveaway link for your chance to win a $10 GC to Amazon or AllRomance.
Good luck and keep reading my friends!

About the Author:
Annabelle Jacobs lives in the South West of England with three rowdy children, and two cats. An avid reader of fantasy herself for many years, Annabelle now spends her days writing her own stories. They’re usually either fantasy or paranormal fiction, because she loves building worlds filled with magical creatures, and creating stories full of action and adventure. Her characters may have a tough time of it—fighting enemies and adversity—but they always find love in the end.