Hi there! Today I’m welcoming Jacob Z Flores back to tell us all about his new contemporary M/M romance. SUDDENLY YOURS is a Vegas-bachelor party gone really, really married. Whoops.

I really enjoyed UNDERCOVER BOYFRIEND, so I’m sure this one will be a fun romp, too. Catch the behind-the-scenes guest post and be sure to scroll down to get in on the $50 GC and ebooks giveaway! 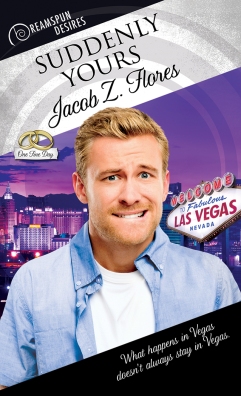 About the book:
“What Happens in Vegas Doesn’t Always Stay in Vegas”

Cody Hayes is having one epic morning-after. The hangover following a Vegas bachelor party is nothing new to him, and neither is the naked man in his bed.

His apparent marriage is a different story.

Carefully plotting every detail of his life carried Julian Canales to a senate seat as an openly gay man. A drunken night of Truth or Dare isn’t like him… and neither is marrying a man he just met. He’d get an annulment, but the media has gotten wind of his hasty nuptials. If Julian’s political career is going to survive, he has to stay married to a man who’s his opposite in every way.

Now he must convince Cody that all they need to do is survive a conservative political rival, a heartbroken ex, their painful pasts… and an attraction neither man can fight.

Cody Hayes had had some epic hangovers in his life. In college he’d woken up naked in front of his fraternity house after his brothers had decided to draw obscene pictures in Magic Marker all over his skin. It had taken him a week to finally scrub the many penises off his flesh. Then there was his twenty-first birthday, when his best friend, Sam Judd, convinced him he’d look good without eyebrows, or the time he’d sung “I Will Always Love You” to his college crush, the star quarterback for the Texas Longhorns. That had been a fun night of trying not to get his ass kicked.

There had been other moments like that throughout the thirty years of his life, but this one… well, this one took the cake.

He’d never woken up married before.

“We’re what?” his new husband asked before glancing at Cody’s hand. Cody quit fiddling with the wedding band and pointed to his finger.

Julian, his gasping groom, fixed his gaze on his own left hand. “Is this a joke?”

If only this was a prank cooked up by his scheming best friends, but neither of them was that lucky. Although Cody couldn’t quite remember everything at the moment thanks to the alcohol-induced fog that clouded his memories, he distinctly recalled walking into the twenty-four-hour chapel hand in hand with Julian and laughing all the way down the aisle. They certainly weren’t laughing now. “Nope. We’re hitched.”

“This—this can’t be happening,” Julian groaned, a look of panic seizing his dark, handsome features as he glanced at the white sheets wrapped around their bodies. “Am I—? Are we—? Did we—?”

Cody didn’t need Julian to finish his questions to know what he was asking. Clearly they’d been married long enough already for Cody to finish his thoughts. “Yes, yes, and—” He reached under the blankets. The head of his cock was raw, and when he cupped his balls, they ached as if he’d been slamming them hard against something all night. “Yes.”

Julian covered his mouth with his hand, and a second later he was a naked blur heading for the bathroom. Shortly after the door slammed, the magical sounds of violent retching echoed off the tiled walls.

Not exactly a stellar way to start off their lives together.

Behind the scenes from author Jacob Z Flores:

Character Inspiration for Suddenly Yours

Hi, everyone! I’m so glad to be here promoting Suddenly Yours, the second book in my One Fine Day series, published by Dreamspun Desires, Dreamspinner Press’s newest imprint.

I’m so excited about these books because they have been so easy and fun to write. I’ve completely enjoyed the process from beginning to end and can honestly say that I haven’t experienced writer’s block so far. (I hope I didn’t just jinx myself with that!)

What I also love about this series is that each book is a complete standalone. New characters and situations can be found in each book, but the one common theme that brings them together is that each book centers on a marriage or a wedding, and for this book the characters wake up married in Vegas after a night of fun and debauchery. That obviously explains why the book is titled Suddenly Yours.

As you can see, the wedding is the catalyst for the entire plot of the book, and it brings together two men with different approaches to life. Cody flies by the seat of his pants, never really thinking about the consequences of his actions while all Julian ever does is contemplate the repercussions of every decision he makes.

So, when I was looking for my usual character inspiration, I had to find two very different types of men. Then, something happened to me for the first time in over ten books: I knew exactly who I wanted to be the carefree Cody—Jake McDorman. 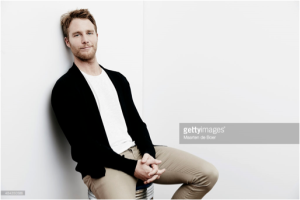 Those of you who watch Limitless will recognize McDorman, since he is the star of the show. To me, McDorman’s character, Brian Finch, is the epitome of goofball Cody, who makes decisions on the fly and who also makes it his life’s mission to annoy those around him. Like Finch, Cody makes jokes to deal with the difficulties of life, but there’s more to Cody than what might appear on the surface. Underneath the smiling face and quick one-liners lies a mess of insecurities that stem from his mother’s many failed marriages and Cody’s disastrous attempt to find his own happily ever after.

That’s why for me, McDorman was the right fit for Cody.

While finding my Cody was relatively easy, locating my inspiration for uptight senator Julian Canales proved a bit more difficult. Unlike Cody, Julian lives by a strict set of guidelines, designed to bring him success and happiness his family could never find. I had to find someone who would capture the seriousness with which Julian lives but who also possessed a repressed playfulness that was just dying to come out. That was when I came across Wilmer Valderrama.

Valderrama made the perfect Julian. Not only does the man look like he could be a senator, but his time on That 70’s Show told me he also had the ability to be just as much as a cut up as Cody.

That’s what makes these two men perfect inspiration for my characters, and what makes Cody and Julian a great match for each other. Both men are strong on their own and in their own way, but together, they are unstoppable.

To me, that’s the best combination of all.

Click on this Rafflecopter giveaway link for your chance to win a $50 Amazon Gift Card (Grand prize). One of 5 winners will win an e-book from Jacob’s Dreamspinner back list.
Good luck and keep reading my friends!

Jacob Z. Flores lives a double life. During the day, he is a respected college English professor and mid-level administrator. At night and during his summer vacation, he loosens the tie and tosses aside the trendy sports coat to write man on man fiction, where the hard ass assessor of freshmen level composition turns his attention to the firm posteriors and other rigid appendages of the characters in his fictional world.

Summers in Provincetown, Massachusetts, provide Jacob with inspiration for his fiction. The abundance of barely clothed man flesh and daily debauchery stimulates his personal muse.

When he isn’t stroking the keyboard, Jacob spends time with his daughter. They both represent a bright blue blip in an otherwise predominantly red swath in south Texas.

3 thoughts on “Making it Happen in SUDDENLY YOURS–Guest Post and Giveaway!”