Be sure to drop down and check out the excerpt, interview and get in on the Kindle Fire giveaway! 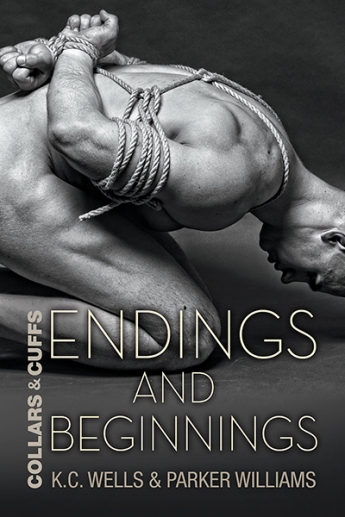 In all his relationships, Darren Fielding never found the level of intimacy he witnessed between Thomas Williams and his sub, Peter, the day of Peter’s “rebirth.” Not only that, he never realized such intimacy was possible. For two years, Thomas’s business card has been burning a hole in his wallet. When Darren’s lover moves on, maybe it’s finally time to see where that card takes him.

Collars & Cuffs’s new barman, JJ Taylor, is really conflicted right now. He went to the club with a very specific purpose, already convinced of what he’d find there. Except it’s not what he expected at all. He certainly didn’t anticipate finding himself drawn to the new wannabe Dom. Nor could he have guessed the direction that attraction would lead him.

Old love, new love, vows, pain, rage, moving in, moving on…. The members of Collars & Cuffs face an event that touches some of them deeply, but it will only reinforce what they already know: together they are stronger, and some bonds cannot be broken.

The alarm clock would be going off in ten minutes, but I hadn’t been asleep for the last half-hour. I lay there, tousling Peter’s hair while he slept. The weight he carried on his slender shoulders always seemed to disappear when we had a vigorous night of lovemaking, followed by sleep. I loved waking up a few minutes early so I could count my blessings.

Six minutes until the clock would be going off. I sigh. I wish I could stop time right now, so that we could both simply lay here and be together. It’s a foolish dream, I know, but I’m not willing to give it up. Until the day that Peter walked into my life, I never realized what I had been missing. His presence brought a warmth on the chilliest of nights, and made me want to soak it all in.

Five minutes. I know that Peter worries about me dying before he does. He fears being alone almost as much as I do. But I’ve taken steps to ensure he’s taken care of. Hell, even Jarod has put something aside so Peter won’t have to worry if something happens to me. Or when.

Four minutes. What would I do without Peter? That bastard, Curtis Rogers, almost took him away from me. I could have lost my boy without ever telling him I love him. I take the time to do that every day now. Peter has to know that he’s a good, kind soul, and that he means everything to me. How I ever thought I could live without him is beyond me. Having him now makes me realize how empty my life had been.

Three minutes. He’s stirring. He must know that it’s close to the time we would both be starting our day. He’ll make breakfast while I shower, then he’ll start on his chores. I’ve never seen him happier than when he gets to work in the library. I order more books now than I ever have, just because it pleases him. I might be his Dom, but that doesn’t mean I can’t spoil my boy. Funny how the books I used to order were stodgy old research books, but now I order more mysteries, thrillers, and even some romance books that I know Peter likes.

Two minutes. His eyes are fluttering. Is he dreaming? I hope it’s a pleasant one. He’s had far too many nightmares for someone so young. If I could go back and change things so that Peter never met Curtis, I would do it without hesitation. Even though it would cost me the chance to be with him, I’d do it. Whatever it took to make Peter happy.

One minute. Oh, how I wish I had more time to watch him sleep. His dream must be a pleasant one, because he’s murmuring. Whispering Sir over and over. I see the covers tent, and hope that he’s reliving our passion from last evening, when he cried out for me, clung to me as he achieved his orgasm. God, that’s the most beautiful sight.

The alarm goes off, and Peter reaches over to turn it off. He cuddles against me, and smiles. “Good morning, Sir.”

My heart fills, knowing this incredible man is all mine. I kiss his head. “It is. The best.”

Oh, wow. Such a sweet scene!

Interested? You can find ENDINGS AND BEGINNINGS on Goodreads, Dreamspinner Press, Amazon, Barnes & Noble and AllRomance.

In honor of this being the final book in the series, KC and Parker are giving away a Kindle Fire! Click on this Rafflecopter giveaway link for your chance to win.

About Parker Williams (or at least his voices):
Good day! We are the voices that live inside Will’s head. The ones who whisper to him constantly, beckoning him to speak of our adventures, to tell of our love, and perhaps, if we’re in a mood, kill a person or two.

We guide his hand as he tells our tales where love is the most powerful force, but must be worked for, molded, and finally, embraced. There can be no shortcuts or substitutions on the path to a happily ever after.

We hope you will join with us as Will fulfills his obligation to ensure our stories are told and, we hope, enjoyed.

4 thoughts on “Where We Stand: ENDINGS & BEGINNINGS–Excerpt & Kindle Giveaway!”