Hi there! Today I’m sharing a review for a new supernatural M/M romance from Leta Blake. ANGEL UNDONE features a disenchanted archangel who unexpectedly falls for a closeted Jew. 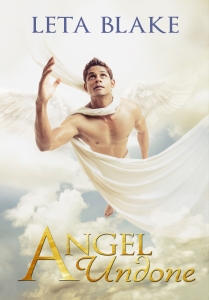 About the book:
The Archangel Michael is tired. He fought wars and shoved his brother Lucifer out of heaven all before the Dark Ages rolled around. His role as protector of Israel now encompasses all of humanity, and while he performs his job perfectly, there’s little personal joy in it.

Until one night in a bar when he meets Asher.

Michael isn’t sure what it is about the vulnerable, self-deprecating Asher that calls to him, but something about the restrained depths of Asher, his gentle smiles and encyclopedic knowledge of flowers, tugs at Michael in a way that can’t be denied. Too bad romance isn’t part of his mission.

Facing an eternity of perfect submission to God’s authority, rebellion stirs in Michael. Questions of free will, angelic vocation, and the role of love and lust demand answers that just might cost Michael his place in heaven.

Angel wings aren’t easy to fold into the shape of human scapulae, but Michael is accustomed to the strain and hardly breaks a sweat. He forces the long primaries to bend into the upper wing coverts, and then, in moves like feathered origami, he tucks it all in again, before smoothing them under flawless human skin.

He glances in the modest hotel room’s bathroom mirror and pulls on the dark brown shirt that will set off his eyes, before running a hand through his blond, curly hair. The light of his angelic grace glows from his pores, too bright to escape notice, and with a small exertion of will he tamps it back.

Though human form is confining and uncomfortable, the time has long passed when dropping down in a blaze of angelic righteousness was appropriate. Now covert operations pay the dividends of souls delivered from jeopardy. Even if Michael’s skin feels too tight, and his wings are already aching, protection is his business and discomfort is a small sacrifice.

After tightening the laces on the leather, soft-soled Clarks he keeps for nights of trawling the Mercy Street bars, he kneels by the sliding glass door to the balcony and looks up at the stars. It’s a fallacy that heaven is up there somewhere. Heaven is everywhere all at once, and yet when Michael dons human skin, he finds his eyes drawn to the sky when he prays.

He rises. Time to go.

My Review:
Michael is a protector of man, walking the Earth and fulfilling what acts of kindness and mercy he can, based on his directives from God. He’s done this a long time, and finds his joy is fleeting. In short, he’s lonely.

One evening, he’s sent to find Asher, a lonely closeted gay man who has never acted on his urges, out of respect for his devout and homophobic parents. The time they spend together fulfills Michael in a way he hasn’t been in centuries. He is supposed to only assist Asher to feel goo about himself, but Michael can’t leave it for one night only. He seeks out Asher again and again.

As they build a relationship, Michael struggles to keep his activities from God, and fears of being cast down, like Lucifer. Would it be so bad? To gain to love of his human, at the risk of losing his connection to God?

This is a sweet and tender novella, with really interesting existential questions. I liked how Michael had a real dilemma, and an untrustworthy confidant who *may* have the answers. Is Asher’s love a test? Or, a gift?

There’s a few yummy sexytimes, and an angel who does his best to love a human, even when it’s a bit of a disaster. Asher is so earnest, and compassionate, and he falls hard for Michael, even as he learns Michael’s big secrets. Asher and Michael are good for each other, and the story ends with an HEA.

Interested? You can find ANGEL UNDONE on Goodreads, Amazon (US and UK) Barnes & Noble, AllRomance , and Smashwords.

About the Author:
Author of the best-selling book Smoky Mountain Dreams and the fan favorite Training Season, Leta Blake’s educational and professional background is in psychology and finance, respectively. However, her passion has always been for writing. She enjoys crafting romance stories and exploring the psyches of made up people. At home in the Southern U.S., Leta works hard at achieving balance between her day job, her writing, and her family.