Hi there! I’m so excited to share a release day review for Jay Northcote’s new contemporary M/M romance, IMPERFECT HARMONY. I’ve read several of Jay’s books (The Marrying Kind, Like A Lover, What Happens at Christmas, and The Law of Attraction) and I must say this one was the most poignant, for me. Depression, grief and loss are my hot-button topics, and this book hit them all, and served me up a generous helping of love to soothe all my heartaches–personal and fictional. 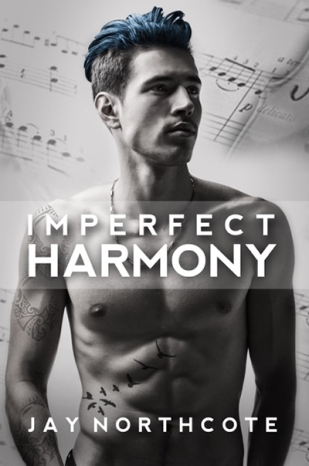 About the book:
Imperfect harmony can still be beautiful…
John Fletcher, a former musician, is stuck in limbo after losing his long-term partner two years ago. He’s shut himself off from everything that reminds him of what he’s lost. When his neighbour persuades him to join the local community choir, John rediscovers his love of music and finds a reason to start living again.

Rhys Callington, the talented and charismatic choir leader, captures John’s attention from the first moment they meet. He appears to be the polar opposite of John: young, vibrant, and full of life. But Rhys has darkness in his own past that is holding him back from following his dreams.

Despite the nineteen-year age gap, the two men grow close and a fragile relationship blossoms. Ghosts of the past and insecurities about the future threaten their newfound happiness. If they’re going to harmonise in life and love as they do in their music, they’ll need to start following the same score.

Luckily there were still some parking spaces outside the church hall where Maggie’s choir met. John made sure they arrived a little early so Maggie wouldn’t have to walk too far. She was managing well on one crutch, but she still tired easily. After he parked, he got out and hurried around to help her out of the passenger door.

A vicious gust of wind whipped a strand of hair into her face. It was dark, still sleeting, and probably slippery underfoot. There was no way John was going to leave until she was safely indoors. “I’ll just see you inside. Let me take your bag.”

Maggie let him have it without argument, and he popped it over his arm. He hovered close to Maggie as she made her way slowly to the double doors. He held one open for her and was hit by a blast of warm air. Then he accompanied her inside as she crutched along the corridor towards an open door. Yellow light flooded out, and the sound of a tenor voice singing “I Can See Clearly Now” raised the hairs on the back of John’s neck with its pure, clear beauty.

“I thought you said the emphasis was on fun rather than perfection?” he said quietly. “He’s got quite a voice.”

“That’ll be Rhys, our choir leader,” Maggie said with a smile. “Come and meet him, even if you’re not staying.”

Maggie paused when she reached the doorway and put a finger to her lips. They listened and waited for Rhys to finish singing. John peered over Maggie’s shoulder, hoping for a glimpse of the man the voice belonged to. Rhys, John presumed, was alone in the room. With his back to the door, he stood at a table pushed to the edge of the room, shuffling through some papers as he sang. All John could see of him was that he was small and slight, and quite young, based on the cut of his clothes. A hood covered his hair.

When he finished, Maggie started clapping.

Rhys wheeled around. “Oh my God! You made me jump.” He pushed his hood down and his face lit up as he beamed. “Maggie. How are you?”

John’s eyes widened as he took in Rhys’s front view as he approached Maggie and gave her a careful hug. His hair, which was shaved at the back and sides, was long on top and dyed peacock blue. His eyebrow was pierced, his arms were covered with tattoos, and the front of his T-shirt was emblazoned with a glittery equals sign in rainbow colours. All in all, he was at least twenty years younger than John had expected and completely unlike how John would have imagined a choir leader to look. In this dingy church hall in their small market town, Rhys looked like a bird of paradise that had accidentally ended up in a cage full of sparrows.

My Review:
John is a musician and music teacher who hasn’t even picked up his violin in the two years since his vibrant and loving life partner of 20 years, David, was killed in a car wreck. Since then his mother became ill with cancer and John moved into her home to care for her in her last days–she died four months prior to the beginning of the story. John’s a virtual recluse in his mother’s empty home; he works as a substitute teacher, and has one friend, Maggie–his mother’s longtime neighbor who’s like a second mom.

While caring for Maggie after a hip replacement, he takes her to choir practice and is instantly struck by the larger than life choir director, Rhys. Rhys is so shiny he’s like staring into the sun–and his passion for music jars John from his long doldrums. For many, music is a healing balm and John–a born and trained musician–has prevented himself from experiencing music for so long he’s a desert awaiting the rain. John allows himself to join the choir for the night, and finds it’s just this side of too much to bear. Maggie is pleased that John could find some solace in the music, and overjoyed that he decides to continue accompanying her to the practices. John, for his part, is experiencing an almost unwanted attraction for Rhys–a man too young and too direct and too much for John to handle in his vulnerable state. Learning that Rhys, too, mourns a lost lover, their union becomes a situation that is nearly unavoidable.

Rhys may only be 23, but he’s lived his years. Well, not the last year and a half, perhaps, not since Lyle’s tragic accident in any case. Rhys and Lyle were first lovers, and performing sensations, sure to secure that recording contract they both sought, and the dramatic end of their love and life together left Rhys broken inside. Finding John to be in much the same state, Rhys is drawn to him, a kindred spirit, despite the 19 year age gap. Rhys sees that singing helps John to emerge from his grief shroud, and gently encourages him to embrace the second love of his life: music performance. I can tell you, reading this book was not a breeze. It’s bittersweet, and raw, and captivating all at once. I had so many emotions coursing through me, channeling the grief and loneliness and reluctance of both John and Rhys to move forward in life and love. Their guilt at finding happiness was so understandable, and so poignant. And, John has some real doubts about being so much older than Rhys. Even if they work at it and it works out…John expects he’ll die first breaking Rhys’ tender heart again. Can he do that? It seems unconscionable to him.

There’s a powerful adage that goes something like this: Joy shared is joy doubled. Grief shared is grief halved. I think that Rhys and John experienced that in the story, and I know it’s true in my life. I loved every second of the pain I felt while experiencing John and Rhys’ story, and I loved it even more when I watched their love grow and develop and become a new and bright thing for them to share. As you can imagine, there are some ups-and-downs to the story, yet it ends on a note that is so happy, it’s impossible to believe that the harmony between John and Rhys is anything short of perfection.

interested? You can find IMPERFECT HARMONY on Goodreads and Amazon.

Ms. Northcote is giving away single copies of a backlist book to one random commenter on each of the blog posts in support of IMPERFECT HARMONY. For an entry into the contest, tell me what pastime would become (or has already become) a bittersweet memory for you if you lost someone especially dear to you. I’ve already kicked off the comments with my own experience.

Thanks for popping in and don’t forget to comment in order to win!

9 thoughts on “Rebuilding Hearts in IMPERFECT HARMONY–Review and Giveaway”