Hi there! Today I’m sharing in the release day festivities for a new contemporary M/M Romance from Jay Northcote. THE LAW OF ATTRACTION is a fantastic standalone workplace romance that strikes the right balance of communication, tension and sexytimes.

Catch my review below and be sure to enter the book giveaway, too! 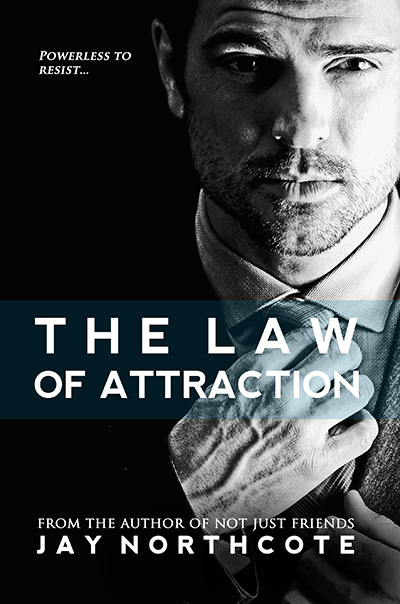 About the book:
When a professional relationship turns personal, it’s impossible to resist the law of attraction.

Alec Rowland is a high-flying lawyer in a London firm whose career is his life. He doesn’t have time for relationships and his sexuality is a closely guarded secret. After picking up a cute guy on a Friday night, Alec’s world is rocked to its foundations when his one night stand shows up in the office on Monday morning—as the new temp on his team.

Ed Piper is desperate to prove himself in his new job. The last thing he needs is to be distracted by a crush on his boss. It’s hard to ignore the attraction he feels, even though Alec’s a difficult bastard to work for.

Both men strive to maintain a professional relationship, but tempers fray, passions ignite, and soon they’re both falling hard and fast. If they’re ever going to find a way to be together, Alec needs to be honest about who he really is because Ed won’t go back in the closet for anyone.

His companion was still watching him, seemingly waiting for him to make his move. Alec felt irrationally irritated. This wasn’t how it was supposed to go. Even though he only did it occasionally, picking up men was easy for Alec. Buying a drink was more than he usually bothered to do for the twinks he hooked up with when he was in the mood for a warm body to fuck. Alec was well aware of his own attractiveness and used it to his advantage. A crook of a finger, a tilt of his head, or even just a look was usually enough to make them come running.

But this guy didn’t seem to know the rules of the game.

“Strong, silent type, huh?” He suddenly grinned at Alec, all neat white teeth and dimples. “You could start by telling me your name. Mine’s Ed.”

“Alec.” He handed a note to the barman as he came back with their drinks. “Keep the change.”

“Cheers, mate.” The barman winked as he pocketed the tip.

Ed’s eyebrows lifted. “Change from a twenty? You must have money to burn.”

“Something like that.” Alec let his gaze rake deliberately down Ed, examining him from the front this time. His arms were still folded over his chest and his T-shirt had ridden up enough to expose a feathered line of hair on his belly, leading down to a nice-looking package in obscenely tight skinny jeans. “I hope you bottom?”

Ed blinked and choked on his mouthful of rum and Coke. Alec suppressed the urge to grin, enjoying the fact that Ed had momentarily lost his cool.

“I’ve been known to,” Ed replied, rallying. He licked his lips.

“Good.” Alec held his gaze, noting with satisfaction that Ed’s pupils had blown wide and his lips parted as Alec looked at them. God, he had a pretty mouth. Alec lifted his glass and downed his drink. The burn of the whisky tore through him and made his nerves tingle with anticipation. He needed a good fuck; it had been too long. “Drink up, then.”

Oh, that Alec is a right git, inn’t he? This is an auspicious meet-cute, but dang does their chemistry reach combustible levels.

My Review:
Alec is a hardworking corporate attorney hoping to make partner in his law firm. He puts in extraordinary hours as he has nothing else to do with himself. He’s a deeply-closeted gay man who’s hidden his orientation ever since that fateful day he was expelled from school for having a dalliance with a schoolmate–and that wasn’t even the worst that happened to him that day.

Ed is a newly-minted attorney, back in London and seeking employment. The weekend before he’s due to report at a firm as a temporary associate, he’s out with his flatmate and gets picked up by a suave wealthy older man. Alec. Their connection is immediate. Ed’s not a player, and he doesn’t go for older guys, per se, but something about Alec’s swagger turns him on. And, it’s the same for Alec. He usually hits on mealy-mouthed younger men who’d never challenge him in any way, but Ed stands up for himself. Demands a drink and some conversation before he allows himself to be wooed.

Their night together is incendiary. Neither has the guts to call it quits, and they share Alec’s bed in his barren home. The morning after is worse than shite, but it becomes all the more complicated when Ed turns up as the temp on Alec’s team handling a huge hotel merger. Alec’s so fearful of Ed revealing his dark secret, and Ed’s a peach.

Lookit, I loved the book. I didn’t always love Alec, but Ed–he’s a dream. A good dream. The kind you wake from and immediately wish you could fall back to sleep into. He’s kind and charming and funny, and hardworking–even surpassing Alec’s insane work ethic. Alec’s in turmoil. He’s so attracted and so scared and so bitter seeing Ed openly admitting to his sexuality and it being accepted without a qualm. Alec’s been carefully cultivating a hetero persona in the office, using a longtime friend as a beard. He’s fearful that coming out now will convince his workmates that he’s a liar, and jeopardize his partnership hopes.

It’s all very real, and the romance that brews is so bittersweet. Working together for days on end becomes a struggle for both of them–and Alec gets vindictive at one point. The result: pure passion.

I thoroughly loved the loving here. And the parts of tense separation only stoked the fires. They are honest with each other. Alec does not want to come out. Ed will not be a dirty secret. There seems to be no accord to be made, and yet Alec knows the only way to find happiness for himself is to take it. To make it happen. He has real fears of being ostracized in his family, and makes a choice to be honest–and to reveal why he hid his true self for so long. The emotions will run high for the reader, I think, without being caught in too much angst.

The HEA is real, and spectacular. Highly recommend.

interested? You can find THE LAW OF ATTRACTION on Goodreads and Amazon.

Ms. Northcote is giving away single copies of a backlist book to one random commenter on each of the blog posts in support of THE LAW OF ATTRACTION. I’ve reviewed some great books of Ms. Northcote’s in the past year…WHAT HAPPENS AT CHRISTMAS, LIKE A LOVER, and two books about dating and marriage. For an entry into the contest, tell me which book of Ms. Northcote’s you want to read, and why!

Thanks for popping in and don’t forget to comment in order to win!

9 thoughts on “Fighting THE LAW OF ATTRACTION–Review and Giveaway”