Hi there! Today I’m sharing a review for a new MMF menage romance from Lauren Gallagher. This author has many hats, and many names. I’ve really enjoyed several of her books, including LEAD ME NOT, WHAT HE LEFT BEHIND, and LONE WOLF. THE BEST LAID PLANS is a little different as it’s not a gay, or M/M, romance. It features a committed married gay couple who want desperately to have a child and continue to be denied adoption due to one of the characters being Muslim. Then one of their dearest friends volunteers to be a surrogate…and life get complicated. 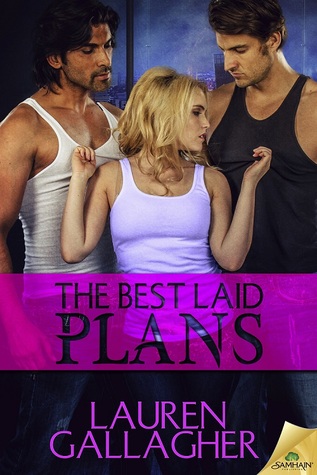 About the book:
It’s a foolproof strategy…until the emotional balance shifts.

After yet another adoption falls through, Gabe is ready to give up, and Shahid isn’t far behind him. Apparently, being a gay couple—half of which is Muslim—is just one strike too many for the powers that be.

When their friend Kendra offers to carry their baby for them, both men balk at first, but gradually warm to the idea. Especially Gabe, whose bisexuality is open to the chemistry among the three of them.

But as the heat flares between Gabe and Kendra, Shahid’s long-suppressed insecurities bubble to the surface. Then some unexpected news catches the trio off guard and derails their plans—and now one heart could be left out in the cold.

Warning: Authors subsist on the tears of readers. Please recycle your hankies by wringing out and reusing. We’d hate to be the cause of a worldwide shortage of Kleenex.

My Review:
This is a contemporary MMF menage romance between a married gay couple and a woman who volunteers to be a surrogate. Expect MM, MF, MMF and MFM pairings.

Gabe and Shahid have been together since college. Eleven years of monogamy, married, with a home they’d love to fill with children. They’ve been trying to adopt for years, but the process has been stymied three times when mothers back out on account of Shahid being an observant Muslim. Gabe is completely in love with his husband, even though their clash of religion makes life uncomfortable with his devoutly Roman Catholic family. Their rather callous insensitivity to Muslim customs and law is a constant aggravation, and Shahid’s grueling work schedule as an ER nurse precludes more than one or two visits annually, and never during christian holidays. (Because Shahid is a boss and takes double shifts so his christian co-workers can spend Christmas and Easter with their families…). Plus, Gabe’s bisexual, and wouldn’t life be easier with a woman. Or, not a Muslim… (These aren’t words that they speak, but the intent has been there all along, and don’t think Shahid isn’t sensitive to this. Because, trust me…he is.)

When this latest adoption falls through, Gabe’s work colleague (they are both high school science teachers and cross-country coaches) Kendra begins to consider offering herself for surrogacy. She’s been divorced from her cheating husband for three years and can’t seem to find a good man to date. Gabe and Shahid were her rocks through the divorce and it’s aftermath. They are all good friends, often spending movie nights and meals together. Kendra and Gabe have a solid friendship, and while Kendra’s not convinced she wants the own children yet, it pains her to see both Gabe and Shahid suffer without. After some soul searching she makes the offer.

Gabe and Shahid are gobsmacked, wary and curious. Neither man really wants to go through IVF–for religious and medical reasons–and Kendra’s a dear friend, willing to undertake Operation Pregnancy in the old-fashioned way: knocking boots… Shahid’s old jealousies regarding Gabe’s bisexuality are dusted off and presented afresh. Would Gabe leave him for Kendra? Again, and again, Shahid’s feared Gabe walking away, simply because of the complexities of their religious and familial detente. They all agree to think it over. A lot.

Shahid prays over it, and considers it. Kendra’s offer may be their one and only shot at parenthood. He agrees to see if Gabe and Kendra are compatible. Boy are they. And while it’s awkward and weird and fraught with complexity, Gabe having a taste of Kendra ramps his desire for Shahid up x 1000. (Not that they EVER had an issue with intimacy before.) The aftermath, however, results in Gabe offering to have Shahid present at their next tryst–so he can be a part of the process, and not feel excluded. And Kendra’s down for it. She’s always found both Shahid and Gabe attractive, and she so wants to help them–and not make it weird. The results are sexy-sexy. Shahid’s stunned at how aroused he is with Kendra in the middle. His fears of being excluded are invalidated; though he’s not particularly attracted to Kendra, the experience is mighty arousing. Shahid’s a confirmed gay man, though. That remains the same… well, mostly the same.

Fast forward, and there’s gong to be heartache. I was just as nervous that Shahid’s fears for Gabe and Kendra would be realized, and they are to a degree. This is a complicated relationship. Three dear friends, two committed spouses and a third, finding a love within each other. One that satisfies a need for family that Gabe and Shahid had been experiencing. I really loved how the intricacies of this all got discussed, rationally, and in detail. I loved Kendra, for her heart, and her selflessness. I didn’t want her to be alone when all was said and done.

What was really intriguing was the issue of faith. Shahid’s faith is strong. He’s observant in his religion, more so than Gabe and far more than Kendra. He’s in constant reflection of his actions, and decisions and if Allah would approve. For him, all things come from Allah, and that included Gabe, who initially approached Shahid under the guise of better understanding Islam in their comparative religions class. Though we do not have any contact with Shahid’s family, his reflections tell the reader that they are kind, compassionate people who are also faithful and believe that their son is who Allah intended him to be. I’m not sure if this is “pie in the sky” hopefulness, but the representation of a well-adjusted Muslim-American family (Shahid emigrated with his family from Pakistan when he was four) with a beloved gay son was powerful for me, from a diversity standpoint.

I also loved that the HEA actually hinged on what had been a source of conflict at the beginning: Shahid’s religion. I don’t believe it was convenient, either, because these characters all had a whole lot of suffering to get through before they got there. It’s an emotional read, with a lot of sexy moments, too. I don’t think the author left an unanswered questions for the reader, which was nice. This kind of story, an evolution of the standard relationship, is often tricky to balance. The characters are all good, kind, decent people who make good, kind, decent decisions 99% of the time. I have a hard time believing readers will not love all of them.

Interested? You can find THE BEST LAID PLANS on Goodreads, Samhain Publishing, Amazon, Barnes & Noble and AllRomance. I received a review copy of this book via NetGalley.

One thought on “Faith, Friendship and Love: THE BEST LAID PLANS–A Review”