Hi there! Today I’m sharing a review for a super sexy M/M/M ménage romance newly-released from LA Witt. WHAT HE LEFT BEHIND is a book about married friends helping a friend recover from abuse. My goodness, it was a swooner! I’ve loved these other books from LA Witt, ON THE CLOCK, LONE WOLF and STARSTRUCK, and jumped at the chance to review this one. So glad I did. 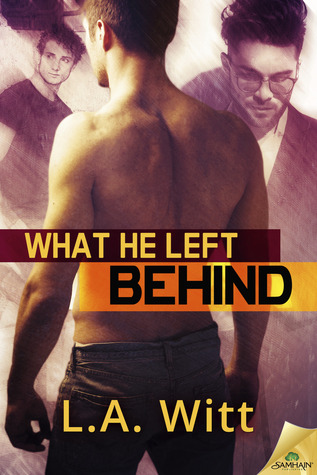 About the book:
Can you ever have a second first time?

Josh and his husband, Ian, have done their best to help Michael leave his horrific past behind, but even Josh is stunned when Ian suggests that Josh help Michael with his fear of physical intimacy. After all, it isn’t like it would be the first time—Josh and Michael were once each other’s firsts.

A hesitant first kiss, and Josh and Michael’s natural attraction eases the way. But with Michael still balking at the prospect of sex with someone new, Ian steps into the breach.

Everything is fine and dandy until emotions become so entangled, their friendship—and a marriage—could be at risk.

Warning: Contains three guys who will do anything for each other, a hot tub that’s always the right temperature, and a cat with an attitude problem.

Michael was in a long term relationship with an abusive partner, Steve, for five years. It has been roughly five years since Michael escaped Steve’s abuse, and he’s been working with a therapist all this time, but he still cannot bear to be touched, and has had no sexual relations with any partners in all that time. Each time Michael tried to initiate something with a potential partner he suffered panic attacks and PTSD episodes. He’s in his mid-thirties and completely, miserably, celibate.

Josh is Michael’s friend from childhood. They grew up together and shared all their first sexual experiences. They were besties with benefits, for a long time, but haven’t had any sexual relations in more than a decade–not since Josh met and married Ian. Ian and Josh have a stable, satisfying monogamous marriage, and a close friendship with Michael. When Michael confesses his fears over having sex with a new partner, it is Ian who suggests that Josh offers himself to Michael. That’s right. Ian is so sure that Josh can give Michael sexual healing–without damaging their marriage–that he urges Josh to help Michael get it on.

Through fits and starts, Josh is able to coach Michael to open up sexually. They are slow and tentative with each other, and it’s shattering Josh’s confidence, always wondering if he’ll push Michael too far, while also worrying that he is pushing Ian away.

I’m just gonna say that this is one of the most tender, most honest, and most absolutely scorching ménage stories I’ve read in a long time. The feels! My god! I wanted to weep whenever Michael clenched up and panicked. And Josh is an absolute mess inside. He tells the story, so we are constantly privy to his conflict. Ian is spectacular. Honest, and compassionate, and unrelenting as a sexual partner. When Michael becomes comfortable with Josh, and his anxiety over new partners is the last hurdle, Ian is steadfast. And hot! I almost chuckled when Josh began watching them interact and realized, ‘Hey! Why am I WATCHING when I could be joining in!’ I was cheering these guys on from this side of the screen for sure.

Of course, all good things come to an end, and Michael needs to find himself a stable partner, opening up the next round of conflict between the three of them. Turns out so, so good! It’s an HEA all the way.

Interested? You can find WHAT HE LEFT BEHIND on Goodreads, Samhain Publishing, Amazon, Barnes & Noble, and AllRomance.

L.A. Witt is an abnormal M/M romance writer who, after three years in Okinawa, Japan, has recently relocated to Omaha, Nebraska, with her husband, two cats, and a three-headed clairvoyant parakeet named Fred. There is some speculation that this move was not actually because of her husband’s military orders, but to help L. A. close in on her arch nemesis, erotica author Lauren Gallagher, who has also recently transferred to Omaha. So, don’t anyone tell Lauren. She’s not getting away this time…

2 thoughts on “Moving Beyond WHAT HE LEFT BEHIND-A Review”