Hi there! I’m sharing a review for a new contemporary M/M romance out today from JL Merrow. I’ve loved several of her books already–OUT! PLAYED! and To Love A Traitor–so I jumped at this one. LOVERS LEAP is a funny odd couple romance between a young budding chef and the big, burly, gift from Poseidon he rescues from the waters off the Isle of Wight. 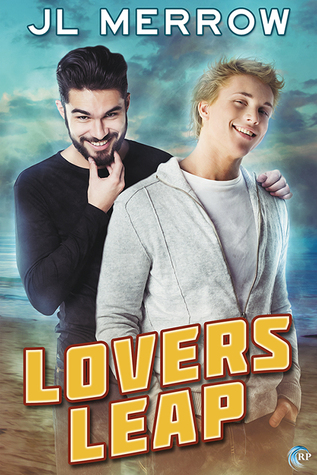 If they looked, would they ever leap?

Good-looking, confident, and doted on by his widowed mum, Michael is used to thinking only of himself. Getting shoved off an Isle of Wight pier by an exasperated ex ought to come as a wake-up call—but then he meets Rufus and he’s right back to letting the little head take charge. Rufus is cute, keen, and gets under Michael’s skin in a disturbing way.

Would-be chef Rufus can’t believe his luck when a dripping wet dream of a man walks out of the sea on his birthday, especially when Michael ends up staying at the family B&B. Life is perfect—at least until Michael has to go home to the mainland.

Rufus can’t leave the island for reasons he’s entirely neglected to mention. And though Michael identifies as bi, breaking his mum’s heart by coming out and having an actual relationship with a guy has never been his plan. With both men determined to keep their secrets, a leap of faith could land them in deep water.

My Review:
4.5 Stars for this humorous and heart felt contemporary M/M romance.

Michael is the youngest of four children, by a ten year margin, and the only son. His father died before Michael was born, so he’s been highly sheltered and protected by his mother and three older sisters. Micheal is a closet bisexual, as he’s sure his mother won’t approve of him with a bloke. Michael is visiting the Isle of Wight in February with his girlfriend of three weeks, Trix, and deciding right then that he’s rather tired of her–at which point she pops The Question. His stammered refusal results in Michael swiftly plummeting off Sandown Pier and into the water.

Rufus Kewell is a leapling–a child born on Leap Day and he’s strolling under Sandown Pier when he crosses a dripping Michael–clearly a gift from Poseidon for his “fifth” (20th!!) birthday. There’s some humorous banter and it’s not long before Michael’s forgetting all about his wet adventure in bed with dear young Rufus. Rufus was born and raised on Wight, and stays on as cook for the B & B that his father and stepmother run. In order to keep it afloat, Rufus has turned down all offers to leave the island to go train as a chef in restaurants on the mainland.

During the course of several days Rufus and Michael get tightly acquainted. But Rufus won’t leave Wight (he claims fear of the water crossing) and Michael won’t tell his mother about having a boyfriend. For these two, they need to take a leap of faith to make it work.

This is such a rollicking, sweet tale, with aggressive, obnoxious and obtuse Michael swaggering his way in to Rufus’ life. And, for Michael, Rufus’ tender charms and selflessness make him want to reach beyond his self-centeredness and be a stronger man. There were some tough love moments carried by Rufus’ best friend, Liz, and even Trix as they both try to convince Rufus that Michael is no good for him. Also, Liz wants Rufus to man-up and go to culinary school. And, there’s a poignant and difficult ordeal with Michael’s staunchly Catholic mum.  I really liked the sentiment and comedy of errors that this plot followed. Plus, a Love Shack was not only located, it was employed. Such fun.

I pretty much inhaled the book in one early morning read. The one thing I might have loved more: more sexytimes. Things got a bit subdued on that front early. *tuts* That said, it’s a fun one filled with delightful Briticisms, great banter and a few praises to Poseidon. Take the leap!

Interested? You can find LOVERS LEAP on Goodreads, Riptide Books, Amazon, and Barnes & Noble. I received a review copy of this book via NetGalley.

About the Author:
JL Merrow is that rare beast, an English person who refuses to drink tea. She read Natural Sciences at Cambridge, where she learned many things, chief amongst which was that she never wanted to see the inside of a lab ever again. Her one regret is that she never mastered the ability of punting one-handed whilst holding a glass of champagne.

JL Merrow is a member of the UK GLBTQ Fiction Meet organising team.

One thought on “Going For It: LOVERS LEAP–A Review”