Hi there! Today I’m sharing a review for a sweet contemporary M/M romance from Samantha Kane. CHERRY BOMB is the sequel to CHERRY PIE, and while it features a new romantic couple we still get to catch up with our old friends John and Conn. 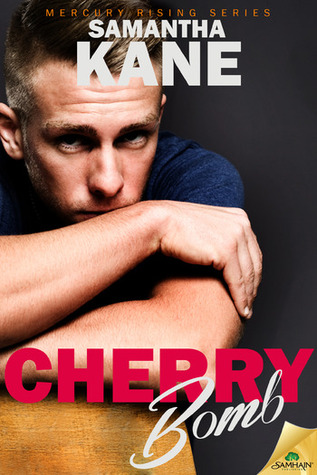 Their spark could be too hot to handle…or bring a dying town back to life.

Officially, Turnstiles CEO Brian Curland is in Mercury to set up a new data center. Unofficially, he’s using this trip to re-evaluate his life, because for a man who has everything, he’s feeling pretty empty.

He could buy any car he wants. But no, he had to rent a piece-of-crap Chevy—which is now broken down on the side of the road. When he’s rescued by a sexy local, Brian does what he always does. Go for what he wants, even if it’s just temporary.

Evan Michaels stops to help because that’s what good guys do. He grew up in Mercury, eventually becoming minister of the local Unitarian church. Though everyone knows him, being gay and being in a gay relationship are two different things. He wants Brian, but their affair has to be secret or he can’t play.

When Evan unleashes his long-suppressed sexuality, Brian is more than up to handling the heat. Yet even though they fall hard for each other, it might take the whole town to convince them it’s a forever kind of love.

This is the second book in the Mercury Rising series and does not have to be read in sequence–though I recommend the first book, CHERRY PIE, too.

Evan Michaels is an out gay Unitarian minister in Mercury North Carolina who also runs the halfway house where his childhood friend Conner stayed after he cleaned out of drugs in prison. (Brief recap of the first book:  Conn and John were the MCs of CHERRY PIE and have developed a strong relationship. John is an internet millionaire, an app creator who’s eschewed the Cali life and decided that the cozy, but dying, town of Mercury is his new home. And John’s friend, CEO of an Internet portal company, Brian Curland has committed to building a call center in Mercury to provide jobs to the poor populace.)

Well, Brian thinks John’s lost his mind to move to “the middle of nowhere” and decides to do a bit of his own reconnaissance, and talk John into working for him back in Cali. Only, Brian’s not really an adventurer. He rents a wreck of a car, breaks down in a cellular dead zone, and is rescued by a beautiful, built man who seems to have a curious eye. And soft lips that Brian, without any ado, ravages. Yep, Brian’s impetuous.  Kiss a strange, muscular man you have known for 38 seconds? He’s lucky that he didn’t become a back woods missing person.

Evan’s shocked, but pleased. He’s attracted to the man in his truck, and he’s intoxicated by the feeling of being wanted sexually. Evan’s been a minister for several years, and while he’s out regarding his sexuality, everyone in Mercury sees him as being The Reverend, not just an ordinary man with needs. Plus, there are no secrets in Mercury. If he goes out with a man, the whole town will know. Would they still accept him as the spiritual leader he feels called to be?

So, fast forward about four hours, and Evan’s in Brian’s bed at the hotel living out some of the many sexual fantasies he’s indulged in during his last SEVEN YEARS of celibacy. I really loved the playfulness of this couple. They don’t expect a lifelong romance, and so they cast their fears aside and screw with abandon. It’s charming, really. They spend a week together, and it’s no secret between them that there is more than a fling happening. But, life gets int he way. Brian’s plans for the call center aren’t exactly what John (and Evan and the good people of Mercury for that matter!) had hoped. The truth of is it is a bit of a kick in the nuts for Evan, who loves Mercury and all his parishoners. It also marks the end of “Brivan” and their “secret” romance. For a time.

Expect some serious Cupid activity on the part of Brian’s on-again-off-again Trey, a popular bisexual actor with starry-eyed dreams for reuniting Brian and Evan. And expect for jaded Brian to go through an existential crisis that is entirely the fault of falling for a selfless man of God. There is little to the reunion, which was disappointing, as their chemistry was explosive and I’d have liked a parting pairing before this one ended.  That said, there’s another book in this series, and I’m sure it will feature Brian and Evan helping Trey with his (possible) pain killer + alcohol addiction. And I have my pick for Trey’s romantic interest all lined up.

This is a quick read with a sweet romance and a compelling plot arc in guise of reinvigorating a dying town. Americana is in full display from the formica-topped greasy spoons to the local color. I gotta get myself out to Kure Beach one of these days. Check out if it is as relaxing and romantic as it sounds.

Interested? You can find CHERRY BOMB on Goodreads, Samhain Books, Amazon, Barnes & Noble and AllRomance. I received a review copy of this book via NetGalley.

Samantha Kane lives in North Carolina with her husband and three children, two boys and one girl. With a master’s degree in American history, she spent seven years as a high school history teacher before becoming a full-time writer and mom.

She’s written books in all of the following series:  THE BIRMINGHAM REBELS, BROTHERS IN ARMS, THE SAINT’S DEVILS, THE 93RD HIGHLANDERS and MERCURY RISING