Hi there! Today I’m featuring a newly revised, expanded, and re-released novel by Samantha Kane. CHERRY PIE is a contemporary M/M romance that is as “country” and “delicious” as the dessert of its namesake. 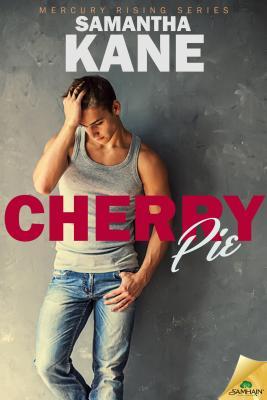 About the book:
“You can go home again if you can get a foot in the door.”

Months after packing and moving from L.A. to Mercury, North Carolina, John Ford still hasn’t adjusted to the heat. Or, to life without his long-time partner gone nearly a year by now. As he fixes up the old house he bought, the quiet becomes his only companion, and he’s content with that until a deep-voiced stranger plants himself under a tree across the street.

Eight years ago, Connor Meecham left someone behind in that house:  himself. Now he’s back to find the man he used to be, before drugs and prison sent his life careening off the tracks. But it’s not his mother’s face peering through the window any more. It’s a man who seems as lost as Conn himself.

When John learns what the house and the dying town mean to Conn, he finds himself opening the door to his heart. Just a crack. But it’s enough to get mixed up in a world of emotions as complicated as the recipe for the perfect cherry pie. Where one misstep can turn something sweet and juicy into one hot mess.

Warning: Contains a guitar-wielding, brooding Southern boy and a reclusive millionaire with a weakness for cherry pie and hot coffee. Excessive porch sittin’ and lemonade included.

My Review:
I really enjoyed this book. First, John is a compassionate lead. He carries have the POV, and it’s good to see him break out of the shell he’s built around himself. He spent ten years as a monogamous partner to a closeted Army officer. This, in itself, wasn’t the worst part, however. It was how–at Steve’s funeral–John learned that he was the only monogamous partner in that relationship. Feeling betrayed, an unable to deal with his life in LA, he drives across the country and buys a worn-down farmhouse in Mercury, NC. It’s a po-dunk backwater town, but it’s perfect for John, who really wants to start over. He spends his time rehabbing the country home. John, see, he’s a very wealthy man–he designed an app game a number of years ago. And he’s kinda resting on his residual income.

Connor is a local boy gone astray. He was captain and quarterback of the state champ football team, on his full-ride to Univ of Georgia–when a hard tackle blew out his knee. Then it was failed rehab, painkillers and addiction. Followed by funding his addiction, however he could. Connor prostituted himself–first to high-paying men, and then to whomever would supply him, spiraling so far, he felt beyond redemption when he was finally arrested. That was three years ago and he’s been clean since. In that time, his mama died and he couldn’t bring himself to visit–even for the funeral.

Connor’s so emotionally lost, his only connection in the world is to the small town in which he was raised. His redemption tale begins at the end of John’s driveway. John is dismayed to see the hulking brute hanging out across the street in the shade of a tree. He tries to ignore him, but after a few days, John insists on driving Connor to the local shelter he helps to fund in town–it’s a safe space for homeless (straight and gay) men to live while they get their lives together. Connor’s mortified to be thrust back into the society he once knew, and reluctantly reveals his sordid tale, and his sexuality, to the people who feel, well, a bit taken aback. But, he does what he set out to do–come to terms with himself, and his past, and finds there are still people who care about him in this world. It’s quite the surprise.

Connor needs a job in order to stay in Mercury, that’s made crystal clear by the local law enforcement entities, and he begins to clean up his old home, with or without John’s approval. In time, John is obliged to accept Connor’s help, and offer him regular lodgings–allowing Connor to repair his own self-esteem in the process. These two find a mutual attraction, and when they become intimate, it is a mutually satisfying experience; John is allowed to be the top man–something Steve had never permitted, while Connor shares himself as a partner, not a boy toy–for the first time.

In the course of all these happenings, both John and Connor are also enveloped into the community of Mercury, and are able to make positive strides toward recover of the local economy. The small, close-knit group of neighbors with whom they associate–many being childhood friends of Connor–become the family that each of these men lacks. And that’s about as sweet as Connor’s mama’s signature cherry pie dessert the locals clamor to consume.

It’s a solid redemption tale, with interesting, compassionate leads and some delicious smexytimes. It’s a vanilla romance with tender insight and a quick pace. John thinks the way to Connor’s affection is to “take care” of him, while Connor knows he must rebuild himself to being a man worthy of love. They have some fits and starts, but they communicate. They share. It’s a whole new kind of relationship for John, who is more than happy to be openly affectionate, instead of being closeted away.

Interested? You can find CHERRY PIE on Goodreads, Amazon, Barnes and Noble, iTunes, and Kobo.

Samantha Kane has a master’s degree in American History, and taught high school social studies for ten years before becoming a full time writer. She lives in North Carolina with her husband and three children.

One thought on “He was Better Than CHERRY PIE–A Review”