Hi there! Today I’m spreading the word on a newly released contemporary M/M romance form Cate Ashwood. A FORCED SILENCE is a redemption romance, and also a police/paramedic coming-out story, so there’s a LOT going on!

Check out the excerpt and be sure to get in on the giveaway for a book from Cate’s backlist. 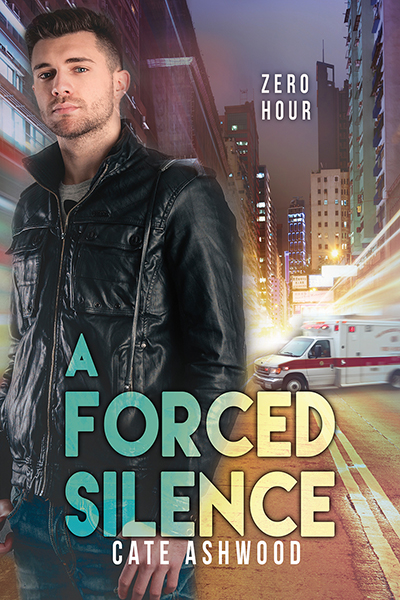 About the book:
For paramedic Adam Carson, his world is lights and sirens and saving lives. Pressures at work keep him firmly in the closet, and life is too busy to contend with the complications that come with dating and relationships. When a familiar face from his past turns up where he least expects it, Adam starts to question whether or not there is room in his life for those complications.

The last person forensic pathologist Sam McKenna expects to see at pub night is Adam, the guy who made his life hell in high school. The attraction is instant, but Adam isn’t gay and Sam has no interest in pursuing him. Still, the leftover animosity from their teenage years isn’t enough to extinguish the lust growing between them. After both are called to the scene of a horrific murder, Adam admits he’s not as straight as he led Sam to believe and they seek comfort and distraction in each other’s arms. One night becomes many as the murder investigation intensifies, but when Adam is faced with losing Sam, he is forced to make a choice: to break his silence, or to give up everything for the job he loves.

“Ah, here they are,” Ford said, turning his head toward two men who were making their way to the table.

“Adam, John, this is Sam. Sam, these are two of the city’s ugliest heroes, John and Adam.” Ford made the introductions as John slid into a chair across from him, lifting his head in greeting.

Sam swallowed hard, barely registering anything other than the man still standing in front of him. Adam Carson. He watched as recognition dawned in Adam’s eyes and a slow smirk appeared on his face. It was the same familiar cocky expression he wore when Sam knew him a billion years earlier.

“You sure have grown up, Dexter,” Adam said, exercising the nickname he had used for him all through school.

Sam lifted one eyebrow. “It seems you haven’t.”

“You two know each other?” Ford asked, eyebrows lifted in question.

“Oh, me and Dex go way back,” Adam supplied, never taking his eyes off Sam.

Sam rolled his eyes. Ford was his friend, but that didn’t mean he wanted to rehash the shit that happened back in high school. That name was one that haunted him right through the twelfth grade. When he moved, he tucked it safely away, but tonight, it seemed, it had followed him.

Interested? You can find A FORCED SILENCE on Goodreads, Dreamspinner Press, Amazon, Barnes & Noble, and AllRomance.

Click the Rafflecopter link below for you r chance to win a book off Cate’s backlist.
a Rafflecopter giveaway
Good luck and keep reading my friends!

About the Author:
Cate Ashwood wrote her very first story in a hot-pink binder when she was in the second grade and found her passion for writing. Her first successful foray into romance writing came five years later when she wrote her best friend, who was experiencing a case of unrequited love, her own happily ever after.

Cate’s life has taken a number of different and adventurous roads. She now lives a stone’s throw from the ocean, just outside of Vancouver, British Columbia with her husband, her little boy, and their two cats. Her life is filled with family and friends, travel, and, of course, books.

One thought on “Living With A FORCED SILENCE–Excerpt and Giveaway”