Hi there! Today I’m sharing a review for a newly published contemporary M/M romance from Kade Boehme. BORROWING TROUBLE is a tender and thoughtful story about a divorced man who finds friendship and more with his younger co-worker.

After an amicable divorce, Jay Hill decided to move back to his rural hometown with his teenage kids. Being on good terms with his ex-wife and in laws has made the transition into single life pretty smooth. Things were good and uncomplicated. Then Landon Petty walked into his life.

Landon didn’t expect to still be stuck in his hometown working at his dad’s sawmill at this point in his life. Being an openly gay truck driver was as awkward in practice as in description. When Jay came to take over managerial duties at his dad’s business, Landon was surprised to find a friend. When Jay turns out not to be as straight as he thought, things get complicated.

When feelings for Landon shine a light on how much Jay’s life has been actually half lived, he’s forced to decide if he’ll jump in with both feet or if he’ll let Landon slip through his fingers. 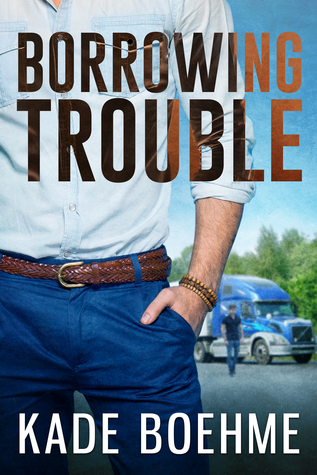 4.5 Stars. I really enjoyed this contemporary M/M romance, which is also a Gay For You story.

Jay Hill is the talk of his Mississippi town. He’s newly divorced from his high school sweetheart, Bethany, and returned to his hometown to raise his two kids (16 y/o son and 12 y/o daughter) near their maternal grandparents. Jay and Bethany have an amicable divorce; she’s realizing her career dreams by going back to college in Atlanta, and he’s content to live a slower-paced life as a manager at a local lumber plant. People there don’t understand how Jay and Bethany split, however, and his in-laws aren’t pleased that the kids aren’t being raised in a church home. And, he’s tired of the churchy women he keeps getting introduced to. Scandalous!

Landon Petty has been working two jobs for his father’s lumber business, despite his degree in History and aspirations to teach. He’s so relieved that Jay is hired to take some of the load off his shoulders, but he’s not happy to find his former babysitter so god-awful attractive. Landon’s gay and out to his parents, but he’s very circumspect and quiet in his hometown. He takes himself three hours away for anonymous hook-ups, and it’s tiring.

As Jay spends more time alone, when his kids go to his in-law’s for a weekend visit, he has trouble in his empty house. So, he invites Landon out to watch a football game at a local bar. They hit it off, and it’s a fast friendship, one Jay and Landon really cherish.

Landon keeps his attraction so quiet, but it’s not long before Jay starts to see Landon in a strange (for him) new light. He enjoys their companionship, and is frightened and confused as his friendly feelings begin to turn into attraction.

Landon was a rock, even when he wanted to crumble. He said “no pressure” regarding coming out, and he meant it. And he lived it. He thrilled to every kiss or touch, and yet he was willing to walk if Jay couldn’t handle it.

While I was angry regarding Bethany’s initial reaction to Jay and Landon, I think she redeemed herself about 90% after sleeping on it. Jay was a far stronger character in the end, than the beginning. His kids were excellently written. Seriously, I wanted to kiss Clint for being an excellent big brother and the sounding board both his parents needed.

There are some fantastic sexytimes, and a beautiful, realistic relationship between two admirable, ordinary men. Expect some editing issues regarding continuity in the plot. Those mostly get smoothed over by the second half.

Interested? You can find BORROWING TROUBLE on Goodreads, and Amazon.

Kade Boehme is a southern boy without the charm, but all the sass. Currently residing in New York City, he lives off of ramen noodles and too much booze. He is the epitomy of dorkdom, only watching TV when Rachel Maddow or one of his sports teams is on. Most of his free time is spent dancing, arguing politics or with his nose in a book. He is also a hardcore Britney Spears fangirl and has an addiction to glitter.

It was after writing a short story about boys who loved each other for a less than reputable adult website that he found his true calling, and hopefully a bit more class. He hopes to write about all the romance that he personally finds himself allergic to but that others can fall in love with. He maintains that life is real and the stories should be, as well.