Hi there! Today I’m sharing my review for BREAKING UP POINT, a contemporary M/M romance out today from Brian McNamara. I reviewed the previous book in the series, BOTTLED UP SECRET, and liked it, so I jumped into the sequel when it came on offer. 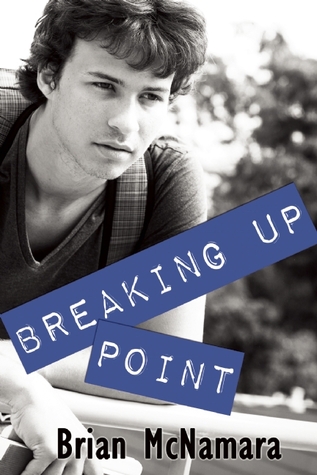 About the book:
Brendan Madden is starting his freshman year of college and, although excited, he is sad to say good-bye to his high school boyfriend, Mark. After a rough transition, Brendan carves out a place for himself at school, where he has new friends and newfound independence. With the added strain of distance, however, he now finds it hard to maintain his relationship with Mark, especially due to the fact that Mark still must hide the relationship from most of his friends.

Brendan’s college life allows him to be open and honest about who he is. He debates whether he is willing to compromise this for Mark, especially since staying in the relationship means forgoing the possibility of finding new romance at college.

My Review:
This book is the sequel to BOTTLED UP SECRET, and better enjoyed if the books are read in order.

To sum up from the previous book:  Brendan came out to his mother, one of his five sisters and his cadre of friends seven months ago. He has a closeted boyfriend, Mark, who is a senior in high school–though Brendan is just entering his freshman year at the Ohio State University. Mark and Brendan had shared some intimate experiences in the previous book, and Brendan is not eager to move things farther as he’s rather set on saving his virginity for marriage, but he’s not happy keeping the secret of Mark from their mutual friends, or in general.

As Mark begins his new life away from home he is open about his sexuality–to everyone, with positive results. He joins a musical theater group and slowly makes friends. At times I felt the prose dragged. For teens, this may seem like a roadmap regarding the initial college experience, but it was too telling, with little advancement. I struggled to emotionally connect with Brendan until the second half of the book.

Brendan does come out the rest of his family in this book–with mixed results. Three of his sisters are cool with it, two are NOT cool, bordering on homophobic, and his mom is on the fence. She still thinks his “situation” is a phase. I really began to engage with the book when all this started happening. Brendan’s interactions with Mark show advancement in terms of physicality, but not emotion. They are separated by distance, and different objectives. Brendan gets the (accurate) sense that Mark will never “come out” and he fully acknowledges that Mark had only dated girls before him.

As Brendan flails in his relationships, his new friendships thrive. In particular, Andres–a project partner from his business class–becomes a close confidante. It turns out that Andres provides very good counsel, and helps Brendan through the rocky issues with both Mark and his family. I liked Andres quite a bit. He’s a little older, and more mature than Brendan, but very compassionate and fun.

There are two sexy scenes in the book that are a little more graphic than fade-to-black, but they are not hot-and-heavy. Mark is exploring himself, and his boundaries. He talks a bit about the physical features of guys he likes (most specifically penis features), but this seemed in keeping with the character’s age and did not feel inappropriate for the audience. (Straight teen guys get graphic about the female body features they enjoy after all…)

I think I did enjoy this book more that the first, but it ends on a more bittersweet note. It explores the morass of coming out, and dealing with disapproving friends or family. It felt very honest, if a little naive. Brendan certainly owns his feelings regarding his family’s response to his news–and this was very engaging. The writing, at times, seems a little clunky, with stilted dialogue and too much description of stuff that was not central to the plot. That said, I do like Brendan, and I am intrigued about his future.

Interested? You can find BREAKING UP POINT on Goodreads, Amazon and Barnes & Noble.  I received a review copy via NetGalley.

The youngest of six kids (and the only boy!), Brian McNamara was born and raised in the suburbs of Cleveland, Ohio. His favorite hobbies growing up were tennis and musical theater. He obtained a degree in finance in 2009 and moved to New York City shortly after to work for a management consulting firm. While pursuing his true passions of writing and acting on the side, he decided to quit his corporate job to focus all his energy on what he loved.

Brian can be contacted at BrianMcNamara.