Hi there! Today I’m sharing in the blog tour for MOONFLOWER, a newly release contemporary romance from Leigh Archer. This one looks to be a steamer! Don’t forget to scroll down and enter the giveaway. 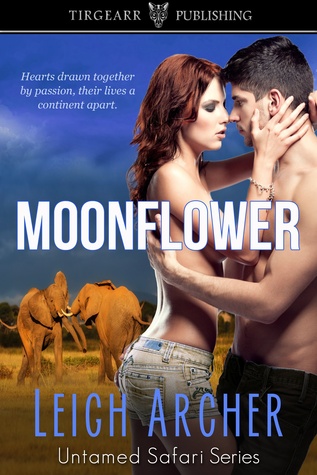 About the book:
Conservationist, Sophie Kyle, takes up a position on a private game farm outside Cape Town in the hopes of paying off her student loans, adding a glowing reference to her resume and indulging her passion for wildlife conservation.

Reuben Manning is a British businessman who has bought a game farm in Africa which he intends to use as a venue to entertain friends and business associates.

With the suddenness and intensity of a bushfire, a powerful attraction ignites between the conservationist and the tycoon, but Sophie has only ever wanted to spend her days in the African bush while Reuben’s life is corporate London.

As the sensuous bond between the two grows, they must find common ground or they are doomed to spend the rest of their lives a continent apart.

Insights from author Leigh Archer:
An aspect I especially enjoyed about writing Moonflower was that it was a feast for the senses. Just a word warning before you begin to read: you just might feel a little peckish by the time you’re through, and may experience a strong urge to travel!

Set off on a game drive just as the sun begins to paint the sky in peach and blue-grey. There’s a crumbly South African buttermilk rusk in one hand and a glass of Amarula in the other.

The recipe for traditional buttermilk rusks:

Sift dry ingredients together and rub in butter.
Add eggs and oil, and mix well.
Make a well in the centre of the dough and add the buttermilk.
Knead well then roll into balls about one inch in diameter and pack tightly into a baking dish at least two inches deep or press dough evenly into a baking sheet.

Amarula is a South African cream liqueur made from the fruit of the African marula tree. It is sweet, creamy and vibrantly fruity on the palate, with notes of caramel, peppery spice and a hint of citrus. Wild animals, especially elephants, adore the fruit and will ram the tree if no fruit has fallen to the ground.

Game drives, whether in the early morning or evening, are an experience for the senses; a blanket tucked around your knees or the feel of late evening sun of your face and a breeze to cool you. The bush is painted in entirely different colours depending on the season or time of day and the same can be said of its sounds and smells.

Eland, baboons and giraffe feature in Moonflower. These animals have been part of the African landscape and its lore for millennia.

The word for God for the oldest people of southern Africa – the San – is ‘/Kaggen’ which can be translated as ‘mantis’. But /Kaggen is not always a praying mantis, only one of God’s manifestations. Others are the eland, hare, snake and vulture.

The colours of Moonflower are the cool silvers and blues of moonlight and the warm, fiery tones of copper. Dinner in a boma: good food, the crackle of flames and warmth of firelight as sparks rise into a sky filled to bursting with stars.

After dinner they took a stroll along one of the Lost City’s paved walkways, flanked on either side by lifelike elephants on plinths; each sculpture lit up against the darkness.

As if the setting weren’t spectacular enough, it seemed as if the heavens had decided to put on a pyrotechnics display, treating them to the spectacle of a highveld storm in the distance. They stood side by side as forks of lightning split the night and zigzagged through the valley.

‘We’d better get back,’ Sophie warned, looking up at the gathering clouds. ‘These storms hit out of nowhere and they’re over in ten minutes, but you get really soaked.’

It was after eleven and the walkway was deserted. Reuben was rapt as Sophie pulled the tablecloth-cum-dress further up her thighs and climbed onto the wide ledge of one of the stone flowerbeds set out in front of the elephant plinths. His fingers brushed her hip as he put a hand out to steady her. The only incongruous aspect of the outfit, he noticed, was a pair of sandals that didn’t provide good footing. But nobody had been looking at Sophie’s feet.

At his touch, she tensed and lost her balance. Reuben caught her around the waist. With their gazes locked, he pulled her against him. She slid slowly down along his body. As her feet touched the ground, her lips parted and she kept her arms wound tightly round his neck.

Reuben did what seemed at that moment like the most natural thing in the world: he bent his head and brushed his lips to hers. Sophie didn’t hesitate. Her lips parted and she took his tongue inside her mouth; its heat and moistness sent arousal flashing through him like the shattering forks of lightning cracking and snaking behind them.

Sophie’s body arched against his and he kissed her harder, opening and closing his mouth to the rhythm of her breathing, which grew faster and faster.

The delicious warm throb of arousal took hold of his body; clouding his mind. Sophie moaned as he ran his hand along her hip, found the bottom of her dress, slid it upwards. His hand slipped lightly over the back of her thigh, found one smooth buttock. He raked his nails lightly over the sensitive skin. Sophie shuddered against him, tightened her grip at the back his neck.

Interested? You can find MOONFLOWER on Tirgearr Publishing, Amazon (US and UK) Smashwords, iBooks, Kobo, and Nook.

Click the Rafflecopter link below for your chance to win a $10 Amazon card. Make sure to follow the whole tour—the more posts you visit throughout, the more chances you’ll get to enter the giveaway.
a Rafflecopter giveaway

About the Author:
Leigh writes romance novels set in her native South Africa. She has always had a love affair with Africa’s wild open spaces, the intensity of its people and sunsets. Her love of storytelling began as a child when she spent every spare moment playing barefoot in golden grass, watching wild creatures, learning to track spoor and dreaming up heroes and heroines dynamic enough to stand out in all the beauty and drama of the African landscape.

Always in search of adventure, Leigh’s journey as a writer has taken her from journalism through communications, to working as a novelist.

2 thoughts on “Love on the Savannah: MOONFLOWER”