Hi there! Today I’m sharing in the blog tour for TREBLE MAKER by Annabeth Albert. This contemporary M/M romance is part The Voice, part GLEE, and all good. You know I loved the Portland Heat books, so I jumped at the chance to review this one! Don’t forget to page down and enter the giveaway for a $20 Amazon gift card. 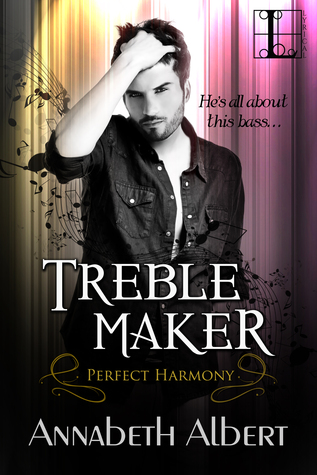 About the book:
On Perfect Harmony, the ambitious competitors heat things up on stage and off…

Cody Rivers is determined to be a rock star, but couch-surfing between bar shows gets old fast. Joining an a cappella group for a new singing competition show could be his last chance at real fame—unless the college boy from the heart of the country messes it up for him. Lucas Norwood is everything gothy, glittery Cody is not—conservative, clean-cut, and virginal. But when a twist in the show forces them together, even the sweetest songs get steamy as the attraction between them lights up the stage. Lucas wants to take it slow, but Cody’s singing a different tune—and this time it may be a love song…

The bass singer was gay. Cody wiggled his hips in an exaggerated move that always got him company on dance floors, waited a beat, and … there. Right on cue, the curly-haired singer gave him another sidelong glance.

A straight dude might grant Cody the occasional double take because, yeah, it was damn hard to ignore Cody’s style of fabulousness. Today, for example, the style gods had smiled on him—his hair was the perfect combination of deliberate spikes and casual falls, the silver specks in his eyeliner complemented his studded leather belt, and his red skinny jeans showed off his ass. So when the bass’s double take had turned into something more like a quintuple take, Cody knew what those lingering glances meant. Knew it despite the fact that the bass looked fresh off the farm, all wholesome and rosy-cheeked and wearing a tie/sweater vest combo perfect for performing in a church choir.

Whatever the dude was, he was screwing up Cody’s big break. Twitchy farmer boy and the rest of his all-boy group had screwed up multiple run-throughs of the opening number for the new season of Perfect Harmony. No one would notice Cody’s singing if the other groups kept crashing into one another and losing the chorus. He’d worked damn hard to earn this solo, and he didn’t need farmer boy messing it up with his clodhopper feet that kept tripping over thin air.

My Review:
4.5 Stars for this contemporary M/M New Adult romance.

Cody is a 23 y/o goth/glam singer trying to make it in LA. He’s barely coasting with a van nearly his own age stuffed full of his belongings, couch-surfing until he can land some more gigs. His newest gig is the lead vocalist of an acapella singing group on the reality show, Perfect Harmony.  He’s already figured out the ins-and-outs of surviving this competition, and it might-could involve some private time with one of the assistant directors. And, no matter what, Cody’s not going to seduce that clod-hopper of a corn-fed Iowa bass who keeps giving him the eye.

Lucas is a 21 y/o out gay man, but he’s a virgin. He’s never even shared a kiss with another man. He attends a conservative college and is the poster boy for his father’s religious writings; essentially, he’s signed on to the school’s morality code–that he will save his virginity for marriage. While his parents accept his sexuality, they want for him to find a sweet, kind gay man to spend his life with; Lucas is attracted to men who are not quite sweet and probably not kind. Being part of the competition puts Lucas in direct contact with all sorts of flamboyant persons, and, unfortunately, Cody is exactly Lucas’ type.

These two are an odd couple, indeed. Cody’s almost horrified at Lucas’ lack of experience. He can’t bear the crap way Lucas’ singing group treats him, however, and he helps Lucas learn the choreography steps he needs. Their interactions are definitely fraught with sexual tension, but they are also filled with misunderstanding, and a bit of prejudice. Lucas really has a lot of trouble accepting himself as gay–as an adult who can and should make his own decisions regarding his sex life. I really loved how Cody called him on this, and also how Lucas didn’t simply dismiss it.

I was raised in a very conservative church environment, and knew many people who committed to abstinence/celibacy. Lucas and his friends reminded me so much of them. He’s got a lot of expectations to be a moral and upstanding gay man, one who indulges in nothing. I could sense that pressure, from his group, friends and parents. Having Cody, the physical embodiment of many of his desires, so close, and so willing to be more than a dancing coach, was the ultimate temptation.

I don’t want to reveal too much of the plot, but it simmers with attraction, desire and self-denial. Cody is willing to play into some of Lucas’ fantasies, but he is a demanding lover, too–and he wants Lucas to grasp what he is missing by shielding himself from experimentation. All Lucas’ friends continue to warn him off Cody–thinking that Cody will corrupt him, but Lucas believes he can’t really be corrupted, having long since understood that he has been corrupting himself for years, assuaging his unhealthy desire with raunchy porn. There are many challenges to Lucas’ morality code–and his broadening experience is crammed with revelation. I loved how Lucas took charge of himself. He more than desires Cody; over the weeks of intense connection he develops love for him, and is shattered when it seems that Cody is willing to prostitute himself for an advantage in the show.

Meanwhile, Cody learns a lot about himself, and his own desires. He has always been a lone wolf, but working with his group, and Lucas, gives him a greater goal outside of his own self. It creates a need for community that he has eschewed since he left home the night of his high school graduation. I really enjoyed how vulnerable he made himself, and also how that dovetailed with Lucas embracing his own path–separate from the promises he made as an untried child.

I also dug how Lucas’ parents reacted to his newly-asserted independence. They could have been obstructive, but it didn’t happen that way. The book doesn’t end with the standard “finale” win, and I liked that, too. I was so glad, actually, that these folks got to live out their new dreams because I think I’d have been sad if it all crumbled and only Lucas and Cody remained. I did enjoy the behind-the-scenes of the TV show, and all the strategy involved.

Interested? You can find TREBLE MAKER on Goodreads, Amazon, and Barnes & Noble. I received an ARC of this book for review via NetGalley.

Emotionally complex, sexy, and funny stories are her favorites both to read and to write. Annabeth loves finding happy endings for a variety of pairings and is a passionate gay rights supporter. In between searching out dark heroes to redeem, she works a rewarding day job and wrangles two toddlers.

4 thoughts on “He Loves a TREBLE MAKER”