Hi there! Today I’m sharing my review for HELD HOSTAGE, fourth book in the Sin City Uniforms series by Morticia Knight. This is a contemporary police M/M romance and features a SWAT officer who falls for a mild-mannered everyday hero. It was so sweet, with a bit of kink to spice it all up! Comment on this post for a chance to win a copy of ALL FIRED UP, the first book in the Sin City Uniforms series. 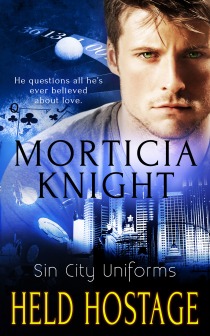 About the book:
SWAT officer Cole can handle just about anything, until he rescues Brett – a man who makes him question all he’s ever believed about love.

As a member of the Las Vegas Police Department’s SWAT team, Cole has seen his fair share of danger, but he’s never taken a chance on love. He’s willing to have some fun when the mood strikes him, but he’s married to the job. Called in on a hostage situation, Cole is prepared for anything and everything… except for the brave and beautiful Brett.

Brett has been burned before, most recently by Officer Parker McLean. He’s hoping to settle down in Vegas, perhaps find someone he can build a life with. The last thing Brett’s looking for is another man in uniform. But when he meets Cole, there’s an attraction that can’t be denied. Still, he hadn’t expected to fall for the chiseled alpha.

What begins as nothing more than two people experiencing a great night together spirals into something far deeper. But will Brett be able to handle the stress that comes with having a lover who constantly puts his life in jeopardy? And can Cole risk his heart on an everyday hero, or will the job he knows so well remain his top priority?

How about a teaser?

Brett had already grabbed both of them a beer and had brought it straight to the bedroom. Instead of jumping him the minute they’d entered the apartment, Cole had simply followed behind, eyeing him, as Brett had moved through the motions of being a good host and getting comfortable. He wasn’t going to stop and analyze why a man who’d just told him the night before that he didn’t do relationships had shown up unannounced at his job and was once again in his bedroom less than twenty-four hours later.

Brett let go of the tie that he’d half unknotted already. He’d already hung his suit coat in the closet and had toed off his loafers then pushed them out of the way over by the dresser.

“How important is that tie to you?”

Brett glanced down at the royal blue silk neck accessory that had an elegant silver paisley design woven into the fabric. He liked it. Liked it a lot even. But was it important? Not really. He’d purchased close to a hundred ties since he’d been employed by Jon Martin. He wore one every day and preferred to have on the most recent seasonal styles when he went to work. It had no significance beyond that.

“Not important at all.”

Cole stepped toward him and Brett’s heartbeat accelerated. Cole reached down to finish untying the knot then pulled one end, sliding the thin strip of fabric out from under his collar. Cole wrapped the ends around each of his large hands then snapped them. It went taut. It was strong. Brett couldn’t wait to find out what it would feel like when Cole bound him with it.

My Review:
This is a series book, but easily enjoyed as a standalone.

Brett is manager of an upscale men’s clothing store in Las Vegas. This is a step-down from his regional manager position. He made this career move to have more time with a man he thought he loved, Officer Parker from a previous book in the series. Parker didn’t return his strength of affection, but Brett had already set his mind on settling down, so he can find a long-term lover. His former high-travel lifestyle precluded this.

He’s on the job one week when a psychotic man takes his salesforce hostage and a SWAT shootout results in casualties. Brett had tried to intercede, and he’s wracked by guilt over those who died in the crossfire.

SWAT Officer Cole Silva was on the scene and fired the shot that brought the crisis to an end. Recognizing Brett from the gay club scene, Cole found him extremely attractive before, but he expects Brett will suffer emotionally from the aftermath of the hostage situation so Cole tries to comfort Brett. Their mutual attraction grows into more—quickly. Their chemistry and sexytimes, with a teeny bit of kink, is incendiary.

I really liked the story. There are some solid feelings developed in a short span of time, but both are much more raw and vulnerability due to the hostage crisis. Brett is hesitant to embark on anything with Cole–mostly because Cole doesn’t DO relationships. He’s too afraid something bad will happen while he’s on duty and he’ll leave someone mourning him. But, Brett doesn’t do CASUAL anymore. He got burned with Parker, and he wants a man who wants him.

Expect a break-up-to-make-up. Expect some intense police actions. Expect to like Cole and Brett–they are both good guys. I breezed through this one with a bit of tension and big ole smile.

Interested? You can find HELD HOSTAGE on Goodreads, Totally Bound,
Amazon (US and UK), and Barnes & Noble.  I received a copy of this book via Goodreads’ Don’t Buy My Love program in exchange for an honest review.

The lovely Ms. Knight is offering a copy of the first book in this series (or a backlist book) to one commenter on each blog on the tour.

So, If you’d like ALL FIRED UP let me know in the comments! You can find and comment on the other tour blogs by clicking here.

Author Morticia Knight spends most of her nights writing about men loving men forever after. If there happens to be some friendly bondage or floggings involved, she doesn’t begrudge her characters whatever their filthy little heart’s desire. Even though she’s been crafting her naughty tales for more years than she’d like to share – her adventures as a published author began in 2011. Once upon a time she was the lead singer in an indie rock band that toured the West Coast and charted on U.S. college radio. She currently resides on the northern Oregon coast and when she’s not fantasizing about hot men she takes walks along the ocean and annoys the local Karaoke bar patrons.

Thanks for popping in and keep reading (and commenting!) my friends!

7 thoughts on “HELD HOSTAGE to Love–Review and Giveaway”