Hi there! Today I’m sharing my review for a book just out! Hot from the ebook press is LESSONS FOR IDLE TONGUES, Charlie Cochrane’s 11th book in the Cambridge Fellows Mysteries series. It is historical fiction set in 1910 England and features a pair of amateur sleuths Profs Jonty Stewart and Orlando Coppersmith. I read and enjoyed LESSONS FOR SUSPICIOUS MINDS and jumped at the chance to read the next installment. 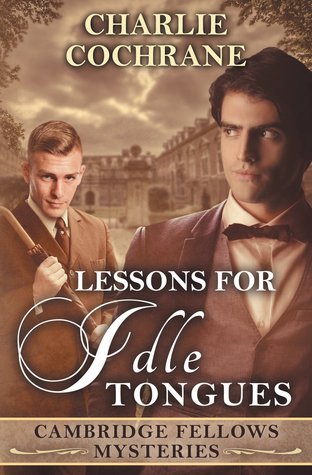 Amateur detectives Jonty Stewart and Orlando Coppersmith seem to have nothing more taxing on their plate than locating a missing wooden cat and solving the dilemma of seating thirteen for dinner. But one of the guests brings a conundrum: a young woman has been found dead, and her boyfriend is convinced she was murdered. The trouble is, nobody else agrees.

Investigation reveals that several young people in the local area have died in strange circumstances, and rumours abound of poisonings at the hands of Lord Toothill, a local mysterious recluse. Toothill’s angry, gun-toting gamekeeper isn’t doing anything to quell suspicions, either.

But even with a gun to his head, Jonty can tell there’s more going on in this surprisingly treacherous village than meets the eye. And even Orlando’s vaunted logic is stymied by the baffling inconsistencies they uncover. Together, the Cambridge Fellows must pick their way through gossip and misdirection to discover the truth.

My Review:
This book is the 11th in a series of historical mysteries solved by amateur sleuths, Dr. Jonty Stewart and Dr. Orlando Coppersmith. While they all have recurring characters, each can be read as a standalone.

Jonty and Orlando are lovers, on the down-low because there are no openly gay men in 1910 London. They are professors at Cambridge and have excellent relations with Jonty’s parents–who know and accept their relationship. Often Jonty’s parents get involved in the solving of the mysteries, either by societal connections or interviewing witnesses/suspects. They have a minimal,role in this book, which centers on the mysterious death of a young woman.

Jonty and Orlando are asked by an acquaintance to investigate his friend’s love’s suspicious death. Lucy was meant to meet Mr. Joyce, for a clandestine stroll, as her family did not accept him as a suitor, but instead, she was found dead of a presumed brain hemorrhage. And, Mr. Joyce was made unwelcome at her funeral. He has other secrets, however, which include the suspicious circumstances of Lucy’s brother’s death–who was Joyce’s close acquaintance in school.

The more that Jonty and Orlando scratch at this issue, the more connections seem to be drawn to other mysterious deaths in the locale, with serious gossip being bandied regarding Lucy’s neighbor, the reclusive Lord Toothill. The level of scurrilous gossip seems to stymie the investigation, until they begin to realize, it is the gossip which is the biggest part of the case. As with previous cases, the answer always lay close to home.

I do enjoy these cozy-type mysteries. They are always well-written and have interesting insight, plus I adore the realistic historical settings and details. I wish there was a bit more loving on the page, but I am satisfied that Jonty and Orlando are loving, supportive partners who do the best they can within their societal constraint.

Interested? You can find LESSONS FOR IDLE TONGUES on Goodreads, Amazon, Riptide Books, AllRomance and Barnes & Noble. I received a review copy of this book via NetGalley.

About the Author:
As Charlie Cochrane couldn’t be trusted to do any of her jobs of choice – like managing a rugby team – she writes. Her favourite genre is gay fiction, predominantly historical romances/mysteries, but she’s making an increasing number of forays into the modern day. She’s even been known to write about gay werewolves – albeit highly respectable ones.

Her Cambridge Fellows series of Edwardian romantic mysteries were instrumental in seeing her named Speak Its Name Author of the Year 2009. She’s a member of both the Romantic Novelists’ Association and International Thriller Writers Inc.

Happily married, with a house full of daughters, Charlie tries to juggle writing with the rest of a busy life. She loves reading, theatre, good food and watching sport. Her ideal day would be a morning walking along a beach, an afternoon spent watching rugby and a church service in the evening.