Hi there! Today I get to share my review for Megan Morgan’s steamy novella ONE NIGHT IN CHICAGO. As you may recall, it’s my hometown, and I just adored how Morgan brought it to life! Plus, this super-sexy story had a couple on the outs who end up with an HEA…my fave! Make sure to scroll down and enter the giveaway for an Amazon gift card. 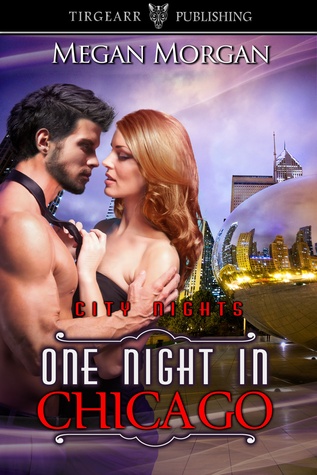 About the book:
Breaking up is hard to do, especially after four years together.

Taylor Middleton, a singer striving for her big break, and her boyfriend Malcolm Darling, a mover and shaker in the music business, have decided to call it quits. Taylor wants to take her onstage persona—Gracie M—to LA, where she hopes bright lights and big dreams await.

But before they break up, the two decide to spend one last night in Chicago, the city where they once shared a passionate, romantic weekend, in hopes of preserving some good memories. In Chicago, Taylor realizes she’s not so sure about taking her talents elsewhere, as Malcolm reminds her why she fell in love—and lust—with him. Taylor may soon discover the right man, like music, can set her free and make all her dreams come true.

How about a little taste:

She bought a shot glass, some postcards, a pen, and a keychain with her name on one side and the Chicago skyline, lit with little lights, on the other.

She dangled the keychain in front of Malcolm’s face. “Come on, this is a work of art. Look at the lights.”

“They’ll burn out in two days.” He batted it. “You’re the worst impulse shopper I’ve ever met.”

“Some of us like to have fun.” She strolled to the windows. “Just because you’re a boring old man doesn’t mean we all have to be.”

“I’m far from boring. I would think after four years you wouldn’t use that word to describe me.”

“You can be overbearing, sometimes.” She pulled her phone out of her purse. “A wet blanket.”

“I’m reasonable. You can be a bit of a child, if we’re gonna go there. Sometimes you don’t think about the consequences before you act. You just jump in.”

“Don’t worry, after tomorrow I won’t be your problem to babysit.”

He sighed. “I don’t think of it as babysitting. I just thought…maybe after four years we learned something from each other. You know, you help me loosen up, I keep you grounded.”

She took a picture out the window with her phone. “I guess not.”

“You don’t think we’ve rubbed off on each other at all?”

She turned and snapped a picture from a different angle. “It doesn’t seem like it, does it? I mean, here we are, still arguing about the same crap.”

“Surely we’re taking something good from this.” Malcolm followed her as she moved along the railing. “It wasn’t all bad, was it?”

She turned to him. “No. But when it was bad, it was really bad. That’s why this is happening.”

“You’re supposed to say I made you a better person.” Forced humor tinged his voice. “That you’ll always be grateful for the things you learned from me.”

She dropped her phone back in her purse. “Is that all you’re concerned about, that I ‘learned’ something from you?”

“No. But I was hoping we changed each other for the better.”

“Are you changed for the better?”

She gazed out the windows, across the vast expanse of water.

“I feel like I’m not the uptight jerk I once was. Like you taught me how to have a little fun.”

“Yet, you’re still a workaholic.”

“It’s my job! Tay, it’s okay to have fun, but you gotta put in some hard work to have good things. You know that better than anyone. You’re gonna have to work hard in California. Your dream will still take time.”

Anger tightened her chest. “I know that.”

“But it’s okay to dream. It’s okay to look forward to the day when everything you want comes to you.”

“If it does, right?” She snorted. “This could all be a losing game. Why, I might be back in New York and in your arms again before the end of the year.”

He turned toward the window, placing his hands on the railing. “I want you to have your dreams. I wouldn’t mind if you were still in my arms.”

My Review:
Taylor is a 20-something lounge singer from Brooklyn whose 40ish boyfriend Malcolm is a talent agent representing bands, not singers. They have been in a committed relationship for four years, but Taylor is planning a move to LA with two friends in order to launch her singing career there. She’s struggled to find her audience in NYC and is looking for a completely fresh start, even leaving Malcolm behind. This came as a surprise for Malcolm, who’d been more than happy with their relationship. As a big goodbye, he whisks her off to Chicago for a last-ditch effort to rekindle their love, the day before she’s due to move to LA.

The story is told from Taylor’s point of view, and she’s feeling nostalgic and melancholy throughout the first half. She and Malcolm had spent a sizzling weekend together in Chicago early in their courtship, and the memories are bittersweet knowing that tomorrow they will separate, for good. Only, it isn’t quite like that.

Not to spoil, but they do reconnect, in all the right and sexy ways. Their relationship difficulties are all small potatoes, and even a cross country move isn’t the death knell Taylor had once considered. It seems that Malcolm was more than willing to make the changes necessary to facilitate her career–and I really enjoyed his more steady and upbeat advice. Taylor admits to being a diva and drama queen–which I attribute to her youth, in deference to Malcolm’s experience.

This is good, sexy read that will keep readers interested and cheering for an HEA.

Interested? You can find ONE NIGHT IN CHICAGO on Goodreads, Amazon, Barnes & Noble, and Smashwords.

Click the Rafflecopter link below for your chance to win a $10 Amazon gift card.
Make sure to follow the whole tour—the more posts you visit throughout, the more chances you’ll get to enter the giveaway.
a Rafflecopter giveaway

Megan Morgan is an urban fantasy, romance, and erotica author from Cleveland, Ohio. Bartender by day and purveyor of things that go bump in the night, she’s trying to turn writing into her day job so she can be on the other side of the bar for a change. She’s a member of the RWA and author of the Siren Song urban fantasy series from Kensington Books, as well as numerous other shorter, sexy, smutty works.