Hi there! Today is the release of Laura Kaye’s newest offering in the Hard Ink series. HARD TO BE GOOD is the book fans have been waiting for…Jeremy Rixey is about to find love! 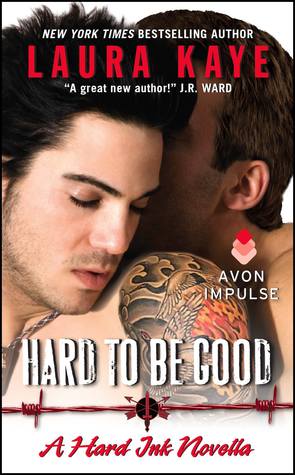 About the book:
Hard Ink Tattoo owner Jeremy Rixey has taken on his brother’s stateside fight against the forces that nearly killed Nick and his Special Forces team a year before. Now, Jeremy’s whole world has been turned upside down—not the least of which by a brilliant, quiet blond man who tempts Jeremy to settle down for the first time ever.

Recent kidnapping victim Charlie Merritt has always been better with computers than people, so when he’s drawn into the SF team’s investigation of his army colonel father’s corruption, he’s surprised to find acceptance and friendship—especially since his father never accepted who Charlie was. Even more surprising is the heated tension Charlie feels with sexy, tattooed Jeremy, Charlie’s opposite in almost every way.

With tragedy and chaos all around them, temptation flashes hot, and Jeremy and Charlie can’t help but wonder why they’re trying so hard to be good…

“You know,” Jeremy said with a smirk, “if you find yourself feeling the urge to kiss me, that’s good, too.”

Charlie gave a small laugh, all of his tension draining away. “I might be feeling that urge right now.”

Jeremy’s thumb stroked over the side of Charlie’s neck and his gaze narrowed. “Are you, now?”
Nodding, Charlie decided to put his tattoo into practice. He leaned in, flicked his tongue against Jeremy’s lip piercings, and kissed him. Threading his hands into Jeremy’s hair, he pushed his tongue deep in the other man’s mouth, tasting, exploring, stroking.

Jeremy gave as good as he got, and soon they were breathing hard, and clutching tight, and grinding against one another until Charlie had to gasp for air.

“Lay down with me?” Jeremy whispered.

“Yes,” Charlie said, letting Jeremy lead him to the big queen-sized bed. They stretched out on the soft flannel plaid comforter.

Jeremy pushed Charlie onto his back and climbed up over him. The other man’s weight felt phenomenal as it pressed him into the soft bedding. “I like the look of you here. In my bed,” Jeremy said.

“Yeah?” Heat filled Charlie’s cheeks at the comment, but only because he loved it so much.

Jeremy nodded. “Me on top of you—is that hurting your side?” Charlie had taken the bandage off at Jer’s instructions hours before, but the tattoo would take upwards of two weeks to heal, apparently.

“No,” Charlie said, quickly sliding his hands up to Jeremy’s back to encourage him to stay right where he was. Because Charlie would’ve endured just about anything to keep him there forever.

“Gladly,” Jeremy said, sucking Charlie’s lower lip into his mouth. Slow, deep kisses quickly escalated to fast and frantic. Their bodies shifted and pressed. Their hands grasped and tugged. Their hard cocks rubbed together through their jeans until Charlie was suddenly sure of one thing.

“I don’t want to come like this,” he rasped, his brain scrambling to figure out exactly what he did want. And how to find the courage to voice it.

Jeremy pulled back, that pale green gaze absolutely on fire. “Then how?”

Charlie swallowed hard and his pulse raced even faster. Because his body, heart, and head were all in agreement, and he knew what he wanted—from Jeremy, with Jeremy.

My Review:
This is a novella in the Hard Ink series that is best read as part of the series. This is the first gay romance in the series.

Jeremy Rixey is the owner of Hard Ink, a tattoo parlor, and base of operations for his brother Nick’s special ops team who are trying to clear their names following dishonorable discharge after an op in Afghanistan went really bad. The first three books in this series focus on the romances and intrigue of Nick and two of his fellow veterans. While falling in love, with unlikely women, they have spent a lot of time learning more about the guys who set them up–one who may have been their commanding officer, Colonel Merritt. In the previous stories they saved Merritt’s children Charlie and Becca from drug lords. Charlie is an out gay man, and had little contact with his dad–who disowned him years ago.

Now Charlie, a computer programmer, works the tech side of this covert investigation. He just recently learned that his dad wasn’t committing treason, but he suffered a lot in his captivity, including the loss of a two fingers. He’s attracted to Jeremy, who is bisexual, but doesn’t really feel worthy of love. Plus, he’s not sure that ultra cool Jeremy–who he idolizes–would love a computer geek.

These two have spent weeks living in the close quarters of the Hard Ink compound, and Jeremy has definitely been interested in Charlie, not that they’ve had a lot of downtime for romance. In fact, this book doesn’t have a lot of downtime for romance. It spans only a couple of days, and they are fraught with confrontations. And sex. There is a bit of tenderness, and we get to see Jeremy in action as a tattoo artist, as well as a lover. Charlie is, oddly, not as innocent as he seemed, and I wondered where all his experience came from–as he’s admitted to being very sheltered….

I liked the book, but I wished there had been a bit more buildup of the relationship. It all goes too fast, and I wondered if that was because it was expected that some of the Hard Ink readership isn’t keen on M/M romance, so the plan was to keep this installment quick and dirty, leaving the next book to pick up more of the intrigue with a het romance. I think JR Ward did well blending a gay romance into her BDB series, and I was looking for the same experience here from Laura Kaye. I was glad that free-spirited Jeremy and shy Charlie got their time to shine, I only wished for more. I hope this book does well enough that we continue to see these men in future Hard Ink books.

Interested? You can find HARD TO BE GOOD on Goodreads, Amazon (US, Canada, or UK), Barnes & Noble, iTunes, and Kobo.

Don’t forget there’s a lot to love in Hard Ink! Catch all the other books in the series…

Hard As It Gets

Hard As You Can

Hard to Hold On To

Hard To Come By

Click on the Rafflecopter link for your chance to win this huge gift pack! 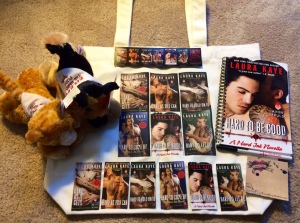 a Rafflecopter giveaway
Good luck and keep reading my friends!

About Laura Kaye:
Laura is the New York Times and USA Today bestselling author of over twenty books in contemporary and paranormal romance and romantic suspense. Growing up, Laura’s large extended family believed in the supernatural, and family lore involving angels, ghosts, and evil-eye curses cemented in Laura a life-long fascination with storytelling and all things paranormal. She lives in Maryland with her husband, two daughters, and cute-but-bad dog, and appreciates her view of the Chesapeake Bay every day.

2 thoughts on “They Find It HARD TO BE GOOD–Review, Excerpt and Giveaway”