Hi there! Today I’m sharing my review for Karen Stivali’s MOMENT OF TRUTH. This contemporary New Adult M/M romance is the second of a three-part novella series following the developing relationship between Collin and Tanner. If you remember my review for the first book, MOMENT OF IMPACT, you know there are sexy times, ahead. (Adult read!) 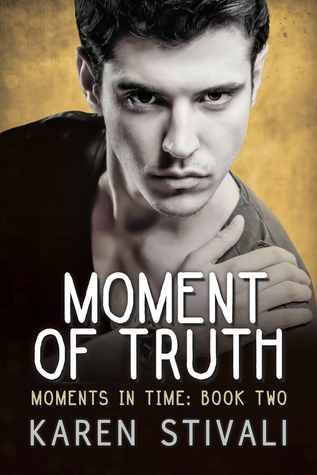 About the book:
Collin expected to spend another summer fixing cars and working at the college pizzeria. Instead, he’s living in a beach house on Fire Island, waiting tables at a hip seaside restaurant and, for the first time since he and Tanner got together, they can publicly be known as boyfriends.

Being “out” takes some getting used to, but with the help of new and old friends, Collin is happier than he ever imagined. And more in love. But newfound freedom brings unexpected challenges, and when friends get flirty, old insecurities arise.

Moments of doubt and jealousy threaten their happiness, and Collin and Tanner must confront the truth or risk losing it all.

My Review:
This is the 2nd part of a novella series. It’s best to read them in order.
4.5 stars for this contemporary M/M romance

Collin and Tanner are two college roommates who recently began a gay relationship. They had been friends long before becoming lovers, but Collin was closeted and Tanner is bisexual. Collin came out to his mother, a devout Catholic, who disowned him. He is now staying in a house with Tanner and several others on Fire Island to work and earn money for his college as all funds have been cut off.

Collin has never been out. Being on Fire Island, which is very gay-friendly, is a startling experience for him. He has a lot of fear regarding encountering homophobia, and spends his summer taking baby-steps with Tanner. Tanner has collected quite a harem of women who fawn all over him, one who continually pops over to their rental house to mooch a meal with the object of her obsession. It frustrates Collin, as he fears Tanner may swing back to the ladies–leaving Collin isolated and alone. Plus, Collin’s crazy for Tanner:

He kissed me, soft at first, then deeper. I forgot there was anyone else in the world, let alone on the same beach.

Thing is, all of this is so new for Collin. He’s never had a relationship, and he’s now with Tanner but they are both being hit on by women. Plus, Collin’s having problems with a housemate who has serious boundary issues–and he’s dealing with more fall out from his family’s ostracism. He makes a friend at his job, Jason, who has also been cut off. The summer winds on with some serious housemate issues, but Collin only has eyes for Tanner, and who is chasing him.

I think we all know his goes pear-shaped. For a bit, anyhow. As in the first book, the name is prescient. There is a moment of truth, and this time it happens on a beach at sunrise.

“Do you realize that tonight’s the first time you’ve said that to me since the night of the accident?”
“Said what?”
“I love you.”
Wait. No. That’s not possible. Is it? I struggled to remember another time. Tanner had said it to me a bunch. Have I really not said it back? Ever? My heart sank into my stomach. I hadn’t. I’d thought it eight million times a day, but I hadn’t said it out loud.
“I’m sorry.” My voice cracked. “I’ve loved you every fucking second since then. I didn’t know I wasn’t saying it. I didn’t realize.”
“How can you not realize something like that?”

Collin tells this tale, and we have a close-up look at his self-consciousness and trust issues. He’s a good guy who acts too impulsively at times. I wasn’t happy with his inability to discuss his feelings. I want to kiss Tanner for being the WAY bigger man, here. Though, reading the blurb for book three, I’m not sure if I should touch up my lipgloss just yet.

I’m gonna call this a HFN, with realistic angst and thrilling smexytimes. Collin is definitely more secure in his sexuality on Fire Island, but both he and Tanner acknowledge the very real possibility that returning to college in the fall will also mean returning to the closet.

Interested? You can find MOMENT OF TRUTH on Goodreads, Dreamspinner Press, Amazon, AllRomance and Barnes & Noble.

MOMENT OF IMPACT, the first book in the series, is a fast-paced Gay-For-You romance that really hits all the feels in a short format. (Check out my review!) It is currently on sale for $.99 through 3/7/15. Time to snap it up cheap…

About the author:
Karen Stivali is a prolific writer, compulsive baker and chocoholic with a penchant for books, movies, and fictional British men. She’s also the multiple award-winning author of contemporary and erotic romances. Her lifelong fascination with people has led her to careers ranging from hand-drawn animator, to party planner, to marriage and family counselor, but writing has always been her passion. Karen enjoys nothing more than following her characters on their journey toward love. Whether the couples are m/f or m/m, it’s guaranteed that Karen’s novels are filled with food, friendship, love, and smoking hot sex–all the best things in life.

When Karen isn’t writing (and often when she is), she can be found on Twitter attempting witty banter and detailing the antics of her fruit-loving cat, BadKitteh. She loves to hear from readers (and other writers), so don’t hesitate to contact/follow/like her at twitter, Facebook, her website, Pinterest, and Goodreads. You can also email her here.

5 thoughts on “Time For A MOMENT OF TRUTH–”