Hi all! Happy new year to my fellow Coffeehousers! I”m eager to see what books you loved best this month!

For me, I read some cool YA, some hot erotica and some sweet romance. But, most of those were to be reviewed on a deadline, and I couldn’t hold them for this post. Still, THINK OF ENGLAND was a shining spot in my winter reads. It’s a M/M romance, which I loooove. This is historical fiction which explored many of the societal mores of 1900’s, not only homosexuality–which was a hanging offense–but also antisemitism and xenophobia. 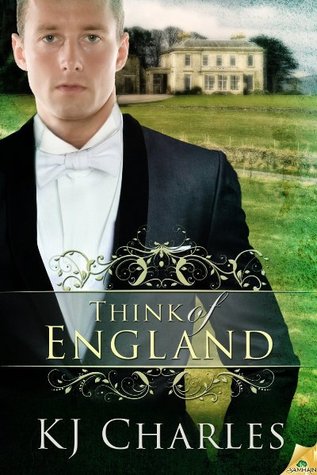 About the book:
Lie back and think of England…

England, 1904. Two years ago, Captain Archie Curtis lost his friends, fingers, and future to a terrible military accident. Alone, purposeless and angry, Curtis is determined to discover if he and his comrades were the victims of fate, or of sabotage.

Curtis’s search takes him to an isolated, ultra-modern country house, where he meets and instantly clashes with fellow guest Daniel da Silva. Effete, decadent, foreign, and all-too-obviously queer, the sophisticated poet is everything the straightforward British officer fears and distrusts.

As events unfold, Curtis realizes that Daniel has his own secret intentions. And there’s something else they share—a mounting sexual tension that leaves Curtis reeling.

As the house party’s elegant facade cracks to reveal treachery, blackmail and murder, Curtis finds himself needing clever, dark-eyed Daniel as he has never needed a man before…

My Review:
I adored this historical M/M mystery/thriller romance.

Captain Archie Curtis is a survivor of a horrific injury while serving in the British army–not even in battle. While inspecting a shipment of weapons, Archie and his platoon were maimed and fatally wounded when their rifles exploded in their hands. Archie lost three fingers and has a limp from a misfired round that caught him in the knee. He dwells in misery, feeling half-a-man due to his loss of fingers, livelihood, and companions.

Acting on a tip, from the faulty gunmaker no less, Archie accepts the invitation of an old family friend Sir Hubert Armstrong, for a two-week stay at his remote country house. Sir Hubert is an industrialist, and his lavish home is a marvel of electric feats. It seems that Sir Hubert has been accused of tampering with the very weapons which destroyed Archie’s compatriots. The house company is interesting, but Capt. Curtis is rather annoyed with Daniel da Silva, a flamboyantly effeminate “poet” who is not only Portuguese, he’s a Jew.

The other male guests take thinly veiled jabs at Daniel, but Archie’s most frustrated that da Silva’s always underfoot when he’s investigating Sir Hubert’s private files. They men strike up a tenuous partnership when it seems that they are both seeking Sir Hubert’s dark secrets.

Meanwhile, they’re captured in a compromising position–one in which they could be prosecuted–or fall under Sir Hubert’s more dark enterprise: blackmail.

Daniel is quite comfortable with his ‘invert’ sexuality, but Archie hasn’t ever considered himself gay. Still, Archie can’t deny the strange attraction he’s beginning to experience for the wily da Silva.

There’s a whole lotta intrigue in this book. And a quietly developing tender romance. The stakes are death if da Silva and Archie are caught by Sir Hubert, and I’ll just say, the book ends with quite a few deaths. Super high tension, mostly on the intrigue-side, however.

I loved the fervor Archie had in pursuit of da Silva, and protecting him from the very dangerous tenants of Sir Hubert’s abode. There was such biting humor, and such valiant gallantry. I swooned. The end was really, just, all I hoped it would be.

Interested? You can find THINK OF ENGLAND on Goodreads, Amazon and Barnes & Noble.

Please take a minute to pop in on my fellow bloggers, to see what book tickled their fancy this month! And, as always, keep reading my friends!