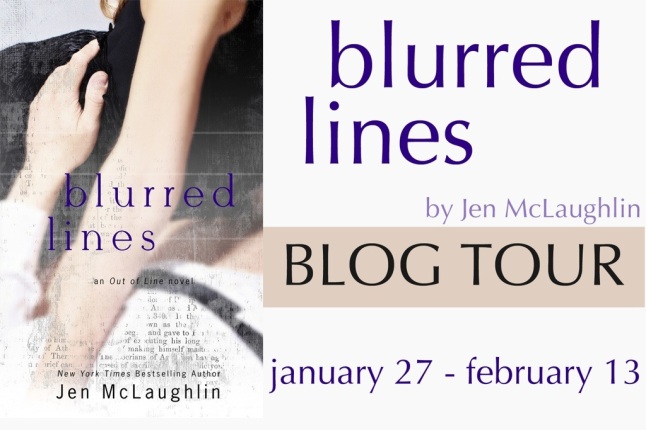 Hi there! Today I’m reviewing a new contemporary romance from Jen McLaughlin! BLURRED LINES is a quick read that steams and stuns.

About the book:
Once burned…
Finding my fiancé naked on my couch might’ve been a good thing, if her ex-boyfriend hadn’t been with her. For the past eight years I’ve been a witness to the power of true love, but after getting burned I’d decided there wasn’t any hope for me finding it for myself. Until I met Noelle Brandt in a hotel bar. Maybe it wasn’t the most romantic meeting, but the moment I met her I knew I had to have her. The more I learn about her, the more I know I’ll do whatever it takes to keep her.

Twice shy…
I’d already found the love of my life, but I’d lost that love forever. And I’d been lost ever since. But one night a wounded man makes all of that go away. He makes me laugh, live, and feel alive. When he tells me he has no intention of letting me go, I finally begin to believe in the power of true love again. That is, until I find out who he really is…and by then, it’s far too late to correct the mistakes we’ve already made. By the time we both know the truth, the lines have already been blurred beyond recognition.

My Review:
This is the first book in the Out Of Line series that I have read, but it’s a standalone, in my opinion.

I’m gonna say, there are elements of this story that I usually dislike: drunken meet-cute, instalove, republicans… But somehow, this book took me past all of the cliches. I really enjoyed it!

Riley Stapleton is the only child of a senator–he’s 30’s, attractive, a successful lawyer, and engaged to be married. Then he comes home to find his fiancé, Sarah, giving her ex-BF an oral happy ending on Riley’s custom sofa. And they mailed the wedding invites last week. Riley is, understandingly, furious. I mean, it’s CUSTOM sofa. LOL.

Here’s the thing: Riley and Sarah were compatible. They were set up by Riley’s mother, and worked well together as a couple, with Riley hoping he’d grow to love Sarah. He’d loved once and lost, so he thought he’d take the safe route–and marrying a woman he didn’t love (but cared for and would cherish) was a smart move. Especially as his father was looking at a call for vice-presidential candidate.

Still, he’s bummed out and leaves his home, heads to a local hotel bar and proceeds to get hammered-drunk.

Finding the sloppy-drunk Riley lingering by the elevator, Noelle learns that he can’t book a room–the hotel is full. It triggers all of Noelle’s care taking instincts. Hearing his tale of woe? Well, she invites Riley to sleep on the empty bed in her room, rather than have him crash in his car.

They both swear that nothing’s going to happen, but their inebriated confessions build a rapport, and there’s non-penetrative exchange of bodily fluids…a first for both, this one-night stand. Well, until Riley does the unthinkable. And the next day he’s got a furious Noelle on his hands! Their attraction smolders, and they decide that a fling is imperative and the sex–when they have it–is nuclear. Still, if the FIRST morning after was uncomfortable, the second one is unbelievable. That Riley, he says the darnedest things when he’s getting some oral attention….

There’s a lot of fun here. There’s also a lot of secrets, and misunderstandings, and making up. Oh, and Riley does find love, sorta–at first–but for realz by the HEA. And Noelle learns to let go of her past, and embrace a brighter future.

Readers of this series will no doubt like the call-backs of other characters into Riley’s story, and the sexytimes are yum. I’d eat Riley with a spoon. And Noelle’s a great female lead.

Interested? You can find BLURRED LINES on Goodreads, Amazon and Barnes & Noble.

Click the link below for your chance to win
A Kindle Paperwhite with the first three books in the Out Of Line series pre-loaded!
a Rafflecopter giveaway

About the Author:
Jen McLaughlin is the New York Times and USA Today bestselling author of sexy New Adult books. Under her pen name Diane Alberts, she is a multi-published, bestselling author of Contemporary Romance with Entangled Publishing. Her first release as Jen McLaughlin, Out of Line, released September 6 2013, and hit the New York Times, USA Today and Wall Street Journal lists. She was mentioned in Forbes alongside E. L. James as one of the breakout independent authors to dominate the bestselling lists. She is represented by Louise Fury at The Bent Agency.