Hi there! Today I’m sharing a slow-burning, magical M/M Romance from Marguerite Labbe. MAKE ME WHOLE is a bit contemporary, a bit ancient history, and a bit mythology, all wrapped up in a realistic romance. 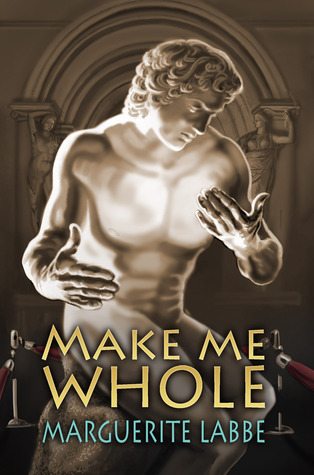 After a grueling battle in ancient Greece, lovers Dexios and Lykon committed their lives to each other in the name of Goddess Cythera. After the war, fearing the strength of his love for Dexios, Lykon abandoned his vow and returned home. Heartbroken, Dexios called on Cythera, who changed him into four unfinished statues. In that form he would wait for his fickle lover to return, break the curse, and make him whole.

Thousands of years have passed when Galen Kanellis finds the statues in the storeroom of a Seattle museum and makes them the focus of his new exhibit. Needing information, he contacts his ex-lover Nick Charisteas. Nick has a lifelong dream of finding the Dexios Collection, and the last thing he expected was for it to wind up in the hands of the man who broke his heart. As both men search for answers about the statues, worries of abandonment and fear of loss test their renewed relationship, threatening to separate them again—this time permanently

Nick and Galen were on/off lovers, not exclusive, about 6 months ago. Nick wanted a commitment and Galen couldn’t give him one, so he walked out. This isn’t as heartless as it sounds. Galen had previously been in a serious relationship but his lover was killed in a car wreck with a drunk driver–while Galen was driving. Galen survived in body, but heart and spirit remain crushed even two years later–he still can’t get behind the wheel without panic attacks. So, he wasn’t ready to commit to another man, though he did feel that something promising had been building between them.

At the point where the story begins, Galen ‘s art museum is prepping for a new exhibit and (astonishingly) he finds four bronze statues in the back of his storeroom. These four statues have no known provenance but they are clearly old and seem form a continuous exhibit, a nude warrior in four separate poses that suggest a missing mate.

Stunned and overjoyed with his find, Galen immediately incorporates the statues into his new exhibit, but he also reached out to Nick–who is a an art fanatic and also an antiquities hunter. Nick knows all about the statues as it turns out–his family had OWNED them in the past but they were lost at sea decades ago. Nick had, in fact, been planning a dive to discover the wreckage.

As it turns out, the statues have a curious history. They are all of Nick’s ancient ancestor Dexios, and depict him awaiting the return of his missing lover, Lykon. Throughout history, these statues have been cared for–at times they have been completed. It seems the real Dexios was cursed to wait eternally for Lykon to return, and the only way for these lovers to be reunited is through reincarnation and reconnection.

So, Nick’s thought is HE is the Dexios while Galen must be Lykon. Galen is appropriately appalled–he’s still not sure he can HAVE a relationship. Yet, the two (Galen and Nick) embark on a real relationship. They go on dates and begin to develop the kind of intimacy they had missed the first time round. It remained to be seen if this would reunite Dexios and Lykon, UNTIL THEY STARTED TAKING OVER THEIR BODIES!!!

I really enjoyed this book. Such great emotional angst. So many stakes–not just can Galen get over his grief? Or, can Nick overcome his fear of abandonment? No, we also have mythology and magic interfering in ways designed to truly test the love and faith of both Galen and Nick.

It was a slow burn, with tentative steps toward reconnection. Many times Nick, Galen, or both, had to slow the machinations of Lykon and Dexios. This was all to the good because they’ve waited hundreds of years to be together and failed several rounds of reincarnation. Smexytimes were well-written and steamy.

Interested? You can find MAKE ME WHOLE on Goodreads, Amazon, Barnes & Noble, and Dreamspinner Press. I received a copy of this book via Goodreads’ Don’t Buy My Love program in exchange for an honest review.

Marguerite has been accused of being eccentric and a shade neurotic, both of which she freely admits to, but her muse has OCD tendencies, so who can blame her? Her husband and son do an excellent job keeping her toeing the line, though. Together with her co-author Fae Sutherland, Marguerite has found a shared passion for beautiful men with smart mouths.

When she’s not working hard on writing new material and editing completed work, she spends her time reading novels of all genres, enjoying role-playing games with her equally nutty friends, and trying to plot practical jokes against her son and husband. Her son is learning the tricks too quickly and likes to retaliate. You’d think she’d learn.