Hi there! Today’s book is a contemporary romance from best-selling author Kristin Proby. SEDUCING LAUREN is part of the Love Under a Big Sky series of novels written about a group of connected friends in Cunningham, Montana. And Lauren is the Cunningham heiress. 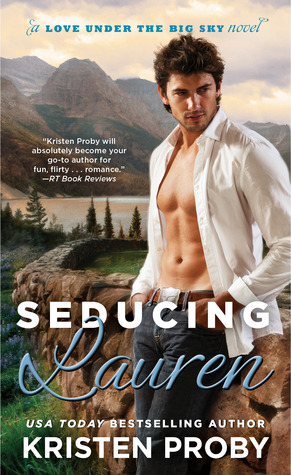 About the Book:
Now that his best friend, Josh, has happily settled down with his true love on a Montana ranch, small-town lawyer Ty Sullivan starts thinking that maybe single life isn’t all it’s cracked up to be. And when Lauren Cunningham’s no-good ex-husband comes after her for an unexpected trust fund, Ty steps in to protect her.

But soon he can’t help but think of her as more than a client. Lauren’s in no mood to jump into another relationship, so how can Ty convince her that her mistake wasn’t getting married, but marrying the wrong guy?

My review:
This book is part of a series, but can be read as a standalone. It features the love story of Ty, a successful lawyer, and Lauren, a newly divorced woman with some pretty lucrative secrets–and a gold-digging ex-husband.

The ink is barely dry on the divorce papers when Lauren is served a suit seeking half the trust fund she inherited after she kicked out her emotionally-abusive, philandering husband, Jack. And, he’s appearing on her doorstep seeking money, however he can get it. Lauren wants Ty to help her shut down Jack’s suit, but he won’t–because he thinks it’s a conflict of interest to take on the legal case of a woman he’s been secretly admiring.

Ty has wanted Lauren for the past year, or so, but he’s been biding his time. She was embroiled in a brutal divorce, and then her parents died suddenly–leaving her both an heiress, and utterly alone. Ty’s history isn’t fantastic. Working his way through college and law school, growing up,with an abusive, alcoholic father, he’s developed a giant “protector” complex. As he attempts to woo Lauren, this become more and more prominent–mostly because Jack is behaving more and more psychotic.

When Jack’s manipulations escalate into threats, Lauren seeks an order of protection, and Ty become the rock on which she leans. Expect domestic violence.

The end is an HEA, but in my opinion it came too fast. I would have wanted to see a bit more of a courtship, especially as Lauren has been burned (badly) before in love. Ty is clearly nothing like Jack, yet, after all the legal and physical battles Lauren has endured/survived, I’d expect more wariness.

Because this series is based on a group of friends, the accessory characters are the ones being spun off. Ty’s friends Cara and Josh had been linked in the first book, and Ty’s (divorced) sister Jillian will find love again in the third. It seems divorced women being successfully matched is the theme here, which is nice.

Expect lots of smexytimes, though the gory details aren’t overwhelming. Expect many professions of love, though they seem to happen too quick. Expect some extremely erratic and illogical ex behavior, though doing so only harms the chance of satisfying his own greed. (My opinion: Jack was almost cartoonishly evil. Not only was he bad, he was bad at being bad, too. His physical threats didn’t serve his self-interest, whatsoever, and that seemed Jack’s whole modus operandi: getting more for Jack. If he had stuck to being cool, slick and litigious, I could have found him more acceptable as a problem.)

Now, a slight rant, because there a lots of books out with ex’s hell-bent on “revenge.” I know that domestic violence is a problem. I know that some men never get over being tossed out, and they stalk, beat and kill their former lovers/partners/wives. I TOTALLY get that. Really. But, if that’s a part of the fiction, I really want to see the possessive behaviors. The unwelcome overtures. The escalating violence. Not because I’m into it–I’m not. But, if that’s the character being written, well, that character needs to be written authentically. Given a whole persona. Most times, I feel this characterization is begun, and left half-done, with a big leap on the reader’s part to fill in the blanks. For me, it always leaves the story arc falling short.

Unfortunately, I felt this was the case for Jack. He was somewhere between annoying and menacing but quickly snapped into psychotic. I saw it happening, and couldn’t make the leap. Partly, I believe it was because Lauren’s notions that her home had been invaded never had any corroborating evidence, just her “feeling,” which left ME feeling skeptical, and emotionally flat, instead of tense or worried.

Back in my youth I was chilled to the bone by SLEEPING WITH THE ENEMY. I will never forget that scene when Laura (Julia Roberts) returns to her new home, in her new town, and senses “someone” has been there. Nothing is broken, in fact nothing is out-of-place. Then she opens the cabinets to find all the canned goods are stacked in perfect columns just as her abusive husband had ALWAYS dictated and she knows he has found her. The fear just slices through her, and the audience.

I guess I was waiting for that to happen here, and it didn’t, so I couldn’t connect as well as if it HAD happened. If Lauren had found, maybe, a trinket left out, or even better something beloved destroyed beside some sort of symbol that couldn’t be directly tied to Jack, but would send a strong message that he’d been in the house, I would have had the requisite fear that she was in physical danger. There is a property crime, yet, it still seemed impersonal; unidentified vandalism often feels that way, for me. As if, once done, it’s exhausted the vandal’s anger and thus the threat. Only if there are serial instances showing more and more damage does a sufficient pattern develop indicating a growing problem.

In short, the book is interesting, and held my attention, but it didn’t quite hit the mark for me. I am kinda sad to say that because I really had high expectations, based on reviews of earlier work. I think I’d like a more straight-forward romance, better, and will look forward to the next book (Jillian’s story) filling the gaps.

Interested? SEDUCING LAUREN releases tomorrow, Aug 19th. You can find it on Goodreads, Amazon, and Barnes & Noble. I received an advance copy for review via NetGalley.

Kristen is the author of the Amazon and USA Today bestselling With Me In Seattle series. She has a passion for a good love story and strong characters who love humor and have a strong sense of loyalty and family. Her men are the alpha type; fiercely protective and a bit bossy, and her ladies are fun, strong, and not afraid to stand up for themselves.

Kristen spends her days with her muse in the Pacific Northwest. She enjoys coffee, chocolate and sunshine. And naps.

Readers can catch up with Kristen on Goodreads, and twitter.