Hi there! Welcome to my stop on the Perfect Kind of Trouble blog tour. This is the second book I’ve read form Chelsea Fine–and I love her New Adult romances! (Check out my review of BEST KIND OF BROKEN…) 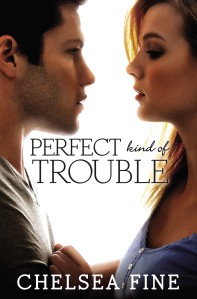 Sometimes when perfect falls apart, a little trouble fixes everything . . .

Twenty-one-year-old Kayla Turner has lost everything. After spending most of her life taking care of her ailing mother, she just wants to spot a glimmer of light at the end of the tunnel. So when her late father-a man she barely knew-leaves her an inheritance, she finally breathes a sigh of relief . . . until she learns the inheritance comes with strings. Strings in the form of handsome playboy Daren Ackwood, her father’s protégé. To see any of her inheritance, she’s forced to team up with him. From his expensive car to those sexy dimples, Kayla’s seen his type before. But Daren isn’t who he seems to be . . .

Struggling to make amends for his family’s mistakes, Daren has a life more Oliver Twist than Richie Rich these days. He’s beyond grateful that James Turner included him in his will, but working with Turner’s princess of a daughter to fulfill his cryptic last wish is making Daren wonder if being broke is really so bad. Still, she’s just as beautiful as she is stubborn, and the more time he spends with Kayla, the less it feels right being without her. Soon Daren and Kayla begin to wonder if maybe the best gift Kayla’s dad could have left them . . . was each other.

This book has hijinks. Lots of them. Kayla has long believed her father abandoned her. She hasn’t had any contact in five years–since he cut all child support and alimony. She’s broke, and indebted to a shady character to the tune of 20G’s–a debt incurred by her mother who has recently died. She arrives at her father’s funeral, for closure, only to learn that there’s an inheritance–and a catch. In order to pursue the undisclosed fortune, she must be (literally) shackled to her father’s former garden keeper–richboy/playboy Daren Ackwood. Ugh.

Daren can’t believe Kayla even dares to show her face in their small town. She’s as heartless as her mother, he supposes, cutting all ties with her father and living like a princess on her trust fund. She didn’t even have the decency to visit when he was dying. And now she wants a piece of the joint inheritance? Daren doesn’t think so.

Their constant interactions help reveal the complete misconceptions these two have. Neither of them is rich–and haven’t been for some time. As the story is revealed we learn that Kayla’s trust fund was squandered by another–she never even knew she HAD a trust fund, and Daren’s wealth was consumed by his father’s alcoholism and legal troubles. They are, essentially, indigent. Revealing all these frailties brings Daren and Kayla close in a way they hadn’t experienced with another.

It turns out Kayla’s dad has set up a scavenger hunt, something he had done often when she was young. The memories evoked and letters he left behind gut Kayla. She learns so much about him, and his love for her, with no way to make amends for all they lost. Coupled with Daren, Kayla’s emotions are on overload and he gains compassion for her. He sees that she was abandoned–not by choice–and really connects with Kayla. Their attraction is mutual, but neither can easily admit the need to be together–they’ve been abandoned too many time to trust another person.  Until, maybe, it’s too late.

The device of hitching these two played better than I had expected. There’s some fun moments when they take tumbles or bang around due to their physical attachment. I would have liked even a bit more of their coping–with, say, toilet time. Nothing more intimate then defecating in front of someone….unfortunately. It wasn’t even mentioned. I kinda felt the “love” was rushed–even in this extreme case–but I was glad to see the emotional shifts these two made. They are already old beyond their years, due to crap parental influences, so their brief bouts of silliness was refreshing. A quality HEA I could get behind! I received a copy of this book for review via NetGalley.

How’s about a little taste? (From Daren’s POV)

I smile at the ground. “Okay, that’s fair.” I glance at the dark streets again. “I’m just a concerned citizen that wanted to make sure you got home safely. That’s all.”

She nods. “How very kind of you, citizen. Would you rather I be going back to the Quickie Stop with someone?”

The idea of Kayla going home with someone—anyone, other than me—rakes down my spine like nails on a chalkboard. I don’t know when I got so possessive of this girl but holy hell. My veins are on fire.

How very unexpected. And somewhat annoying.

I don’t get possessive of women. Ever. Sure, I care about Amber and Pixie but that’s different. I care about them like sisters. I’m protective of them. I couldn’t really give a damn who they, or any other female in this town, go to bed with.

Hot jealousy darts through my veins.

I set my shoulders back in a casual manner. “Not particularly,” I say coolly. “I just wasn’t sure if you had a ride or not.”

“Oh.” She runs a finger over her lips. “And what, you were going to offer me a ride?”

I watch the tip of her finger skim over the pink fullness of her bottom lip and my breath hitches. She can’t say things like “give me a ride” and touch her mouth at the same time. That’s just not fair.

“Well I might have offered you a ride,” I say, inwardly cursing as I remember sweet, precious Monique, “except I’m pretty sure you’re not supposed to take rides from strangers. And since that’s what you and I are…” I sigh dramatically. “It would have just been a waste of time to ask you.”

She smiles behind her moving fingers and I start to wonder if she’d let me kiss her. My guess is, yes. Maybe.

I want to kiss Kayla. Badly. But the idea of kissing her, of touching her at all, also makes me a little nervous. And I’m never nervous when it comes to women.

Goddammit. Everything about this girl is unexpected.

“You’re so obsessed with us not being strangers,” she says, and her eyes shine. “That can’t be healthy.”

I probably shouldn’t kiss her. We have an inheritance to claim tomorrow. We have shit to follow through with. Kissing her is a bad idea. A very bad idea.

“No. Probably not.” I step closer so we’re only inches apart. “But I can’t seem to let it go.”

Yes. She’d definitely let me kiss her. I’m sure of it.

My heart pounds and it’s all I can do to keep my nonchalant demeanor in place.

“Is that what we are, Kayla?” I lower my voice with a crooked grin. “Strangers?”

She meets my crooked grin and raises me a tipped chin. Her eyes are steel and sure, not giving anything away, and I suddenly feel unsure.

She doesn’t react. But she also doesn’t back away.

Kissing her is a bad idea.

Her lips part, ever so slightly, a thin seam of wet flesh forming between the soft skin of her pretty lips, and all my reservations vanish.

Interested? You can find PERFECT KIND OF TROUBLE on Goodreads, Amazon, B&N and iTunes.
About the author
Chelsea lives in Phoenix, Arizona, where she spends most of her time writing stories, painting murals, and avoiding housework at all costs. She’s ridiculously bad at doing dishes and claims to be allergic to laundry. Her obsessions include: superheroes, coffee, sleeping-in, and crazy socks. She lives with her husband and two children, who graciously tolerate her inability to resist teenage drama on TV and her complete lack of skill in the kitchen. You can find Chelsea on her website,  Facebook,  Twitter and Goodreads.
***GIVEAWAY***
Click the Rafflecopter link below for you chance to win

2 thoughts on “They find the PERFECT KIND OF TROUBLE–Review and Giveaway!”