Welcome one and all to the Cephalopod Coffeehouse, a cozy gathering of book lovers, meeting to discuss their thoughts regarding the tomes they enjoyed most over the previous month.  Pull up a chair, order your cappuccino and join in the fun.

This month, I’m reviewing a contemporary romance, by Inglath Cooper called GOOD GUYS LOVE DOGS. Why I liked this story–this four POV tale doesn’t just follow the leading lady and her leading male–it also encompasses their teen children, who themselves have a bit of a fling… 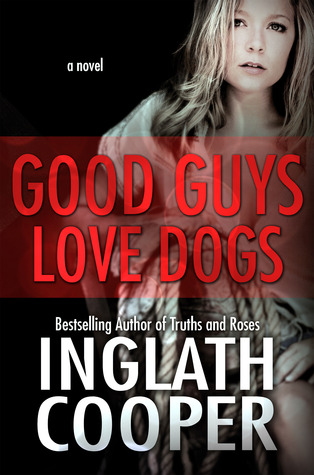 Ian McKinley has worked hard to reach the top. He’s a major player in an NYC stockbrokerage and he’s newly engaged. Sure, the relationship is more a merger than a romance, but hey, he lost his heart when his first wife died of a stroke days after delivering their only child, Luke. Ian’s perfect little world bottoms out when he’s called to pick Luke up from the police precinct on a drug possession charge. Desperate to reconnect with Luke, and keep him out of trouble, Ian takes a year of paid leave and moves them to a small Virginia town to complete Luke’s senior year of high school.

Colby Williams got pregnant her freshman year of college. Baby Lena didn’t stop the dynamo from completing her BS, and DVM, however. Colby has prided herself on the strong relationship she has with her precious girl, but things are suddenly strained –and she’s pretty sure that new boy Luke McKinley is to blame–particularly when she finds birth control pills in her 15 y/o daughter’s backpack. Bigger problem? Ian McKinley, Luke’s father, is the first man Colby’s felt even a tingle of attraction for in the time since Lena’s father walked away without a second glance. Biggest problem? Rachel, Ian’s fiance.

I really enjoyed the interplay between the points of view. There’s some good misdirection going on with the input of Luke–a boy who totally wants his absentee father’s love and approval, yet can’t talk to him at all. Not to mention he’s at a loss to understand why they now live on a farm. And Lena, who thought her father had died, is acting out NOT because she twitterpated (though she is) but because…well…how would you behave if the one person you could trust most turned out to be a big fat liar, huh?

Colby’s desperate to keep her matchmaking friends at bay–she’s not a home wrecker, for goodness sake! Meanwhile, engaged Ian is losing his city slicking mind. Buying farms and sterile calves (of the bovine kind) and rescuing dogs from the shelter. It’s enough to drive one lonely veterinarian over the edge.

Through the first month following the McKinley’s arrival, there’s a lot of drama, and a lot of personal connection, and pretty soon Ian’s not so sure about settling for a marital merger. Not when there’s a heady attraction that could so easily blossom into the kind of love he once knew. And Luke’s taking a shine to a slower paced life–when there’s a quirky girl like Lena to smooth the path.

It’s a not-too-smexy tale of hearts connecting. Both man-to-woman and parent-to-child. Colby learns to step back from mothering Lena, just enough to let her see that it’s okay if one parent didn’t want you–especially when the other so absolutely did. And Ian’s hands-on parenting gives Luke the satisfaction of having a Dad, not a wallet. I really enjoyed this one.

Interested? You can find GOOD GUYS LOVE DOGS at Goodreads, Amazon and Barnes & Noble. It’s been out since 2012, so it may also be in libraries…