Welcome one and all to the Armchair Squid’s Cephalopod Coffeehouse, a cozy gathering of book lovers, meeting to discuss their thoughts regarding the tomes they enjoyed most over the previous month.  Pull up a chair, order your cappuccino and join in the fun.

I’m happy to join in with one of the books I read this past month. As a reviewer of all things ‘women’s fiction’ I have quite a large range. Typically, YA Anything all the way through Erotica. I’ve recently noticed a shift of mainstream romance authors into M/M (male/male) romance–so of course, I’ve checked it out. After reading about 15 of these in the past two months–I must say, I’m pretty impressed. So I chose one that I continue to go back to, because it’s everything I love in a romance (slow build, true emotion), and everything I long for in erotica. (Kink-tastic!) 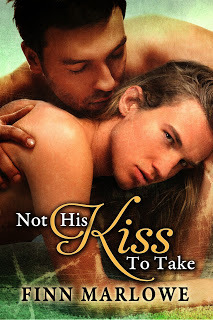 NOT HIS KISS TO TAKE by Finn Marlowe is a contemporary M/M romance set in Spokane, WA.

Dr. Evan Harrison, a gay man and Emergency room physician, suffers debilitating migraines. Due to his inability to function without constant painkillers, he’s stepped away from medicine–and yet the headaches remain. He’s a virtual recluse, shunning bright areas, loud crowds, and general human interaction most of the time. He has a fave watering hole–a quiet dive bar a short walk from his penthouse condo. One snowy night Evan’s hanging out having a beer when an angel walks through the door. Blonde hair, blue eyes, supple young body… Clearly straight, the man captivates him anyway.

Jamie, a good-looking young man, enters the wrong bar on the wrong night. While using the toilet he’s beaten senseless by a trio of homophobes. Problem is, Jamie’s not gay. Still, he’s humiliated and barely coherent when he’s discovered by the strong man who seems to know his way around a body. Afraid that a hospital visit will drain his already meager savings, Jamie begs his guardian stranger to take him anywhere but the emergency room.

Evan complies, taking Jamie to his own home instead. He carefully tends this bright young charge, giving the best care possible. It’s a tender and kind treatment that Jamie has never received. Not from his father–who left a decade ago. Not from his mother who’s too beat down by life to really care–and certainly not from his abusive step-father.

Jamie knows that Evan is gay. And, he knows Evan’s aroused by him. But, he doesn’t seduce him. No, Jamie’s own voracious curiosity is what leads this pair down the rabbit hole together.

In the course of events, both men find what fills their souls–their companionship and eventual sexual relationship. It is a constant push-pull emotionally. Evan knows he’s doing harm by entering into a relationship with Jamie. He’s fourteen years older than his lover, and sure that his sassy angel, Jamie, will bolt back to heterosexuality at any moment. Jamie’s curiously attracted to ‘pervy’ Evan even if he can’t commit to a lifetime of their ‘messing around’–he’s not gay after all–still he’s captivated by the love and kindness Evan lavishes on him. And yet, he’s unable to give the one thing Evan covets most–a kiss.

Yes, they separate, but come together again, stronger, and on more equal terms. This is what is called a GFY story (“Gay For You”) in that one of the characters has never been with a man, but finds the relationship with one man so much more fulfilling than those before that he ‘switches teams’ for his soul mate. It’s the epitome of a romance–with more poignant hardships due to prejudice and homophobia.

If anyone is interested in NOT HIS KISS TO TAKE, the full-length novel can be downloaded FREE ( in multiple digital formats) from Smashwords here. I highly recommend it to fans of women’s romance and erotica. The sex is deliciously written, and there’s a good bit of it, so…YAY!!!

See those links below?  Hopefully you’ll click through to check out the posts of my coffeehouse brethren.  And, as always, keep reading my friends!