Hi there! Thought I’d share an unconventional romance. Actually, it’s more like an unconventional arrangement that turns into a romance. CLAIMED BY THE ALPHAS, by Viola Rivard, is a serial now available in one box bundle. It a shifter book–wolf shifters mostly–who need human women to breed. And, this particular pack has two Alphas. 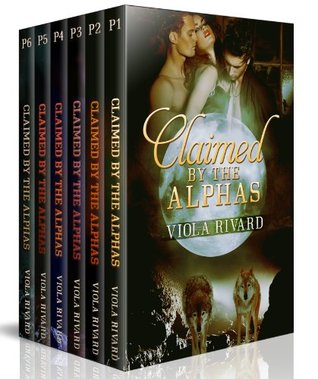 About the book:
She wanted to escape…

When Mila Foster stumbles across the opportunity to become an alpha wolf’s mate, she doesn’t think twice about casting aside her lackluster life among humans.

He wanted a mate…

His whole life, Asch has been denying himself a mate and a family. Now that his pack is stable and his territory is secure, he’s ready to stake his claim on Mila—even if it means he’ll have to fight his closest friend for the privilege of her fertile body.

He had no interest in human females…

Caim prefers the lean, taut females of his own kind—women who can handle the aggressive mating he enjoys. He has no desire for delicate human women with soft, curvaceous bodies—or so he thinks.

Claimed by the Alphas is the story of Mila Foster and her efforts to hold her new pack together by accepting the claim of both of its alphas. It contains sexual themes, ménage romance, and takes place beyond the confines of human society. It is not intended for readers under the age of eighteen.

My Review:
This “book” is a serial, with the first episode free. I downloaded that and enjoyed it, so I bought the second, just to see if it held my interest (sequel’s remorse, and all) and I found I STILL liked it–so I held out for the box set. And, I’m happy to say I really liked it!

Mila is, well, a bit of a goof. She’s an impulsive young woman lacking direction in life and love. She has few ties to her family and, when visiting her cousin learns of The Lottery–humans in their rural New York community are offering women to local shifter packs to secure truces, and protection from attack. The shifters in this book are wolves–and their females are infertile.

See, silly Mila read a “romance”/memoir of a woman who had been a wolf pack Alpha’s mate, and the whole thing sounds rather luxurious to her. Be treated like a queen, bearing the “royal” offspring, respected by all the pack, etc. She jumps into the lottery–to everyone’s surprise (remember she’s impulsive) offering herself as the Pack Bride. *V shakes her head*

Well, imagine Mila’s shock when she learns the pack she’s betrothed to has TWO Alphas. Oh, and they are great friends, and since only one of them will able to mate her they will have to battle each other to the death for the delight of her body. Mila is horrified. And the Pack is rather agonized. They don’t want to lose either Alpha and detest this competition. It’s really Asch’s fault; he wants pups, but he’s not as strong as Caim, who could care less about pups but won’t give up Pack control. All members of the pack fully expect Asch to be killed, forthwith.

Mila is attracted to Asch, and fearful of Caim, and quickly realizing how ridiculous she was to jump into this scenario. Oh, and deciding herself seven shades of foolish for packing necessities like, say, high heeled shoes and curling irons when she was going to be living in a cave. Yes, Mila realizes that she’s a dolt, which is charming. She also comes up with the solution to the Pack Battle Royale–that Asch and Caim should SHARE her!

It’s a pretty rocky road for this city slicker, especially as the she-wolves can get rather catty(?). Remember, both Asch and Caim have availed themselves of these women more times than Mila can count–and Mila’s insistence that they remain true to her seems…sheer lunacy. It all does work out, and the road to pregnancy sure is entertaining.

Interested? You can find CLAIMED BY THE ALPHAS (Box Set) on Goodreads and Amazon.  If you just want to try out the first serial it’s free (and spicy!) Amazon

About the Author: (in Viola’s words)

I write paranormal romance with a dash of fantasy.

Last February, I was working in a call center, trying to save up enough money to go to college. I’d always liked to write in my spare time, but after a great deal of financial difficulties, I decided to try my hand at writing something that someone besides myself may want to read. So, in between calls at work, I penned the first part of Claimed by the Alphas. Not one to wait around for luck, I took my writing career into my own hands and self-published it that same month.

By the end of March, I went from being someone who’d never written much more than a high school essay to becoming a bestselling author. It’s been a bumpy road, but a very exhilarating ride. I still have a great deal to learn, and I appreciate all of the fans who have stuck with me on the journey.

I do my best to price my stories fairly, but there was a time, not too long ago, when even a few dollars was more than I could spare. If there’s ever a book in my catalog that you cannot purchase, send me an email and I’ll provide you with one, zero judgment.