Hi there! I’m really excited to share a review for this contemporary M/M romance from Chris Scully. First, UNTIL SEPTEMBER is an enemies-to-lovers romance, which I found very intriguing. But MORE IMPORTANTLY, this book has some excellent diversity with characters who are First Nations Cree growing up in a racially-charged area, Winnipeg, Manitoba, Canada. I felt it was a brave choice that gave voice to a culture through the character’s eyes. 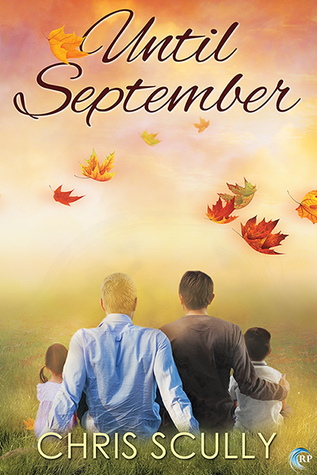 As a teenager, Archie Noblesse clawed his way out of the poverty, heartache, and abuse of the reservation and left his family behind. Desperate to shake the shadow of his past, he reinvents himself as Archer Noble, an outspoken blogger and controversial author who lives only for himself. But when his beloved sister dies, Archer is saddled with guardianship of his niece and nephew.

Elementary school teacher Ryan Eriksson is devastated when his best friend Marguerite is killed, leaving her two young children orphaned. Helping Archer with his new responsibilities eases his grief, but when Archer offers him custody of the children, Ryan’s left with an impossible choice: get the family he’s always wanted, or respect Margie’s wishes and convince Archer to give parenting—and his heritage—a chance.

To buy time, Ryan promises to stay for the summer, hoping that Archer will change his mind and fall for the kids. But Archer’s reluctant, and the growing attraction between him and Ryan complicates matters. Legal decisions must be made, and soon, before Ryan returns to school. But with hearts involved, more than just the children’s future is on the line.

I want to state right up front, that I applaud the author for being sensitive to First Nations culture and writing a Cree MC who has survived the racism and disadvantage of Native life in a real and approachable manner.

Archer Noble (once Archie Noblesse) survived life as the eldest child of a drug-addicted Cree prostitute, and that included several years of sexual abuse from an uncle. He battled his way out, scraping money through theft and turning tricks until he could get legitimate employment and put his younger half-sister through college. Marguerite married and had two children before her husband died of cancer, and when the book opens Archer–now a vocal opponent against the heteronormatism of homosexuals–writes and speaks out against the need/right for same-sex parenting. His official stance is that love doesn’t exist, that gay folk shouldn’t bother with monogamy, settling down, or raising kids. They ought to enjoy their lives hedonistically with out the shackles of society, like marriage, weighing them down.

And then…the phone rings and he learns that Marguerite is dead, and he’s the guardian of his nephew and niece-Dillon and Emma-two kids he’s barely met. Marguerite also named her good friend, Ryan, as a stand-by guardian. When Archer arrives at Marguerite’s he’s overwhelmed and eager to pass the kids to Ryan, even if Ryan is just 25 y/o and gayer than gay. A total twink, and not the kind of gay man Archer either fancies or respects. Ryan is the “picket fence” guy that wants a solid stable partnership, and kids, and everything Archer detests. So, why not give him Margie’s kids?

Ryan won’t accept that, however. He knew Marguerite had a plan putting Archie in charge, and he’s determined not to let Archie run off without a second glance. Ryan takes a hard-line stance, saying that he won’t accept guardianship–even as it breaks his heart–but he will stay with Archer and the kids through the summer while school’s out. During that time, Archer’s supposed to be getting all the legalities in place to assume full guardianship.

Archer’s not a nice guy. He’s a cynical and jaded man who has scraped and scraped and learned to game the system wherever possible in order to survive. He’s not proud of himself, and he’s ashamed of his Cree heritage, which forever marked him as lesser in Manitoba where he grew up. He has no illusions of the past, and is sure his mother died alone, one of the many anonymous Native homicides that went unsolved at the time. Over their summer together, seeing Ryan’s compassion, and Dillon and Emma’s reaction to Ryan, is a watershed experience for Archer. He has no doubt that Ryan–a clearly gay man–is a fabulous parent. And, that he could never live up to Ryan’s example.

Still, there’s a romance building. Archer’s rather adept at the Grindr. And he’s got few scruples regarding hook-ups. He knew, as a Native, that addiction was one issue he’d face. As he didn’t want to die young–like all his family–he chooses sex as his outlet for all frustration, rage or disappointment. Ryan puts his foot down regarding “guests” in the house. Ryan is attracted to Archer physically, and he’s growing to love the man who is learning to raise Dillon and Emma, even if he doesn’t like Archer’s political activist viewpoints. He suspects he’s not Archer’s type but all the close quarters makes for tight connections. And Archer’s narrow-minded view of caregiving and who should provide it is blown wide open. He observes Ryan, the patient, self-sacrificing man who’s getting over his dream to marry his college sweetheart cheer on Dillon and Emma. Ryan’s clearly still nursing a broken heart over the man who used him for a doormat, and Archer’s shamed for having contemplated doing the same.

This is a slow burn, though Archer is definitely, and inexplicably, attracted to Ryan. He’s drawn to his kindness and selflessness–and grateful that Dillon and Emma have someone so wonderful helping them through their grief. Through the days and weeks Archer becomes more comfortable in his role as guardian, and he’s got some very tough choices to make regarding his career and his parenting. Ryan’s summer comes to an end, and while he’d love to stay with Archer and Dillon and Emma, he realizes that he deserves more of a relationship than “the manny” role he assumed at Marguerite’s death. It’s a bittersweet moment, but it’s not the end. Both Ryan and Archer have to make some compromises to their life plans, now. And those compromises work. The book is an HEA, but I will warn readers it’s very low steam. Also, expect some unintentional cockblocking by grieving kids who need drinks in the night.

I loved the tenderness. I loved the ethnicity and inclusion. I loved the enemies to lovers premise that I felt was really well-written and balanced. I liked the progressive growth of the dynamic between Ryan and Archer. Ryan is a gem, and Archer was a fool to let him walk away–but not nearly as big a fool as Ryan’s ex, who let him get away twice.  I wished for more steam, and some sexytimes that happened on the page, not just the “aborted” trysts. That said, this is a tender family drama with a stellar interracial romance.

Interested? You can find UNTIL SEPTEMBER on Goodreads, Riptide Books, Amazon, Barnes & Noble and AllRomance.  I received a review copy of this book via NetGalley.

CHRIS SCULLY lives in Toronto, Canada. She grew up spinning romantic stories in her head and always dreamed of one day being a writer even though life had other plans. Her characters have accompanied her through career turns as a librarian and an IT professional, until finally, to escape the tedium of a corporate day job, she took a chance and began putting her daydreams down on paper.

Tired of the same old boy-meets-girl stories, she found a home in M/M romance and strives to give her characters the happy endings they deserve. She divides her time between a mundane 9-5 cubicle job and a much more interesting fantasy life. When she’s not working or writing (which isn’t often these days) she loves puttering in the garden and traveling. She is an avid reader and tries to bring pieces of other genres and styles to her stories. While her head is crammed full of all the things she’d like to try writing, her focus is always on the characters first. She describes her characters as authentic, ordinary people—the kind of guy you might meet on the street, or the one who might be your best friend.

Although keeping up with social media is still a struggle given her schedule, she does love to hear from readers. You can find Chris on her website and Facebook.