Hi there! I’m so excited to share a review of a fantastic sci-fi M/M YA romance for FT Lukens. THE STAR HOST is an interesting and engaging adventure with a dash of romance and a whole lot of power.

Catch the excerpt, my review and enter the $25 GC and book giveaway below. 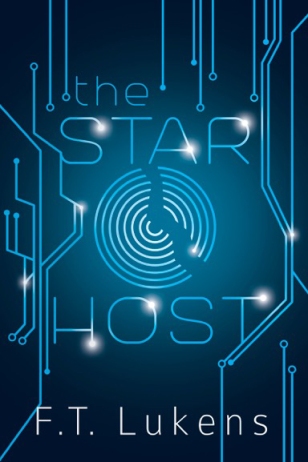 About the book:
Ren grew up listening to his mother tell stories about the Star Hosts – a mythical group of people possessed by the power of the stars. The stories were the most exciting part of Ren’s life, and he often dreamed about leaving his backwater planet and finding his place among the neighboring drifts. When Ren is captured by soldiers and taken from his home, he must remain inconspicuous while plotting his escape. It’s a challenge since the general of the Baron’s army is convinced Ren is something out of one of his mother’s stories.

He finds companionship in the occupant of the cell next to his, a drifter named Asher. A member of the Phoenix Corps, Asher is mysterious, charming, and exactly the person Ren needs to anchor him as his sudden technopathic ability threatens to consume him. Ren doesn’t mean to become attached, but after a daring escape, a trek across the planet, and an eventful ride on a merchant ship, Asher is the only thing that reminds Ren of home. Together, they must warn the drifts of the Baron’s plans, master Ren’s growing power, and try to save their friends while navigating the growing attraction between them.

Once at the hangar, Ren broke away from the two guards and entered the lancer, walking up the stairs, irritation a heavy feeling in his chest.

Janus popped up from a console she had been working under, goggles on her face, gray hair sticking up everywhere. “You!” she snapped. “I told you not to come back.”

Ren rolled his eyes. “It’s not my choice. I don’t want to be here anymore than you want me here.”

“Where are your guards? I told the dumb one not to bring you back, Abiathar’s orders be damned. I don’t want your kind working on these ships.”

She poked a finger hard into Ren’s chest and he staggered back, and rubbed his hand over the spot.

“What the stars do you mean by my kind?”

Her eyes grew comically large behind the goggles. “You don’t know?” She laughed, bordering on hysterical. “You’re more dangerous than I thought. You can’t try to control it if you don’t even know what you are.”

Ren frowned. His tolerance for the cryptic nonsense everyone had spouted since he arrived was gone. He took a step toward the hull and Janus stiffened.

Her face paled and her chest heaved with panicked breaths. “You don’t know what you’re capable of.”

Ren laughed. “I’m capable of nothing. I’m a duster, planet-born with very limited experience with tech. You have no reason to be frightened of me.”

He moved closer to the hull, hand outstretched, fingers splayed.

Ren slammed his hand against the hull, his fingertips leaving greasy marks on the shiny surface. As he predicted, nothing happened.

He turned back to Janus. “See? Nothing–”

His word tangled in his throat, cut off, because suddenly, Ren was consumed with power, rushing from his toes to his fingertips. A blue tint clouded his vision, and his body suffused with golden warmth. And then he was floating amongst the wires, connected to the ship, to the energy source, to everything. The lancer pulsed under his skin, tangling in his veins, its systems integrated with his senses.

It was freeing and frightening.

His consciousness raced along the circuits and he could fix it. He could fix everything. He found the tangle of wires in the artificial gravity system and bypassed it. He found the broken circuits in the air recyclers and with a pulse of power, refurbished them. He saw the static in the com system, a physical entity, and he cleared it away with a brush of his metaphysical hand.

The longer Ren floated through the ship, the less connected he was to his physical body. And if he thought about it, he didn’t need his body. Why would he need his body? He was free here. He moved around with ease, the wires and the systems his route, and the more he pushed, the more he felt the other ships too. They were nearby, on the edge of his perception, and he could go to those, he could jump to the other ones and repair them too.

My Review:
Ren is captured while trying to hide his brother from the gangs of soldiers who range the countryside near his home. Forced to march several days to the citadel of the Baron who rules Ren’s segment of the planet Erden, Ren learns that he’s got powers that rival the legends his mother taught him. he has the ability to shutdown the electric cattle prods and stunners that are continually aimed at him.

He wants to escape, but he knows he needs to be strategic about it. The baron seems to be amassing an army–to what purpose none of the new captive can even guess. The citadel is a fortress, and the baron’s general knows that Ren’s power allows him to control any machine. Ren’s a star host, and his gift is technopathy; he’s soon put to work fixing all the broken tech that serves the baron’s army. And this includes spaceships that seem poised to go offworld.

Ren is housed in a technopath-proof iron prison alongside Asher, a political prisoner. Asher was born and raised on a drift–a space station. He was a member of the Phoenix Corps who crashed on Erden. The only reason he’s still alive is because his mother is a galactic counselor–and providing regular evidence that Asher lives keeps the Phoenix Corps from landing on Erden and wrecking the baron’s plans for offworld domination. These plans include coercing Ren into tapping into ships and space stations, defending and controlling them in the name of the baron. Ren has other ideas, however. He wants to go home, but knows this is impossible. With Asher’s connections they may just be able to escape Erden together, and keep Ren from fusing with the machines that call to him.

It’s a fascinating “chosen one” tale with elegant prose and a fast-paced plot. Ren comes into his powers slowly, but realizes that he’d likely had them all along. His memories of the legends his mother would whisper to him at night and their home strangely devoid of all tech now seems so prescient. He’s just seventeen, but Ren must grow up quickly and hone his abilities if he’s going to survive as a human with free will. Every time he joins with the machines (and the bigger the machines the worse it is!) he risks staying in his star form, detached from humanity and thinking only of the power that courses through him. It is Asher who has the ability to connect with Ren when he’s trapped in the tech-phase. And, as Ren becomes more and more dependent upon Asher to keep him grounded he recognizes that his feelings are getting involved.

This is a YA adventure/romance and there is a dash of romance to go along with the story. Ren’s attracted to Asher, and they are fast becoming the best of friends…maybe more? Could they be? What will happen if Asher can’t get into Ren’s head when he’s in his star form? The last battles of technopath star hosts broke the sky, according to the legends. Ren can see how it happened, and he fears repeating these mistakes as he’s not yet strong enough to control his power lust when fusing with a large machine. Naturally, the only way to save himself and his friends is by joining with a gigantic space station…

Honestly, I loved the book. I found it fresh and interesting. There are very sweet friendships and harrowing escapes and lessons that need learning and boundaries that must be tested, and bested. Ren and Asher together are so perfectly mismatched, and that’s totally adorable. There’s a bit of kissing, but nothing else. Great for YA readers who enjoy clean romances and sci-fi adventures. This world is rich and lush, and there’s no condemnation for same-sex pairing–so no one thinks anything derogatory of Ren and Asher for falling for one another. The book ends with a complete resolution of all hostilities, but you can bet there will be more where this came from, and I look forward to a sequel.

Click on this Rafflecopter giveaway link for your chance to win a $25 GC from Interlude Press or an ebook of THE STAR HOST.
Good luck and keep reading my friends!

About the Author:
F.T. wrote her first short story when she was in third grade and her love of writing continued from there. After placing in the top five out of ten thousand entries in a writing contest, she knew it was time to dive in and try her hand at writing a novel.

A wife and mother of three, F.T. holds degrees in psychology and English literature, and is a long-time member of her college’s science-fiction club. F.T. has a love of cheesy television shows, superhero movies, and science-fiction novels—especially anything by Douglas Adams.